DVD all with UltraViolet™ January 29th 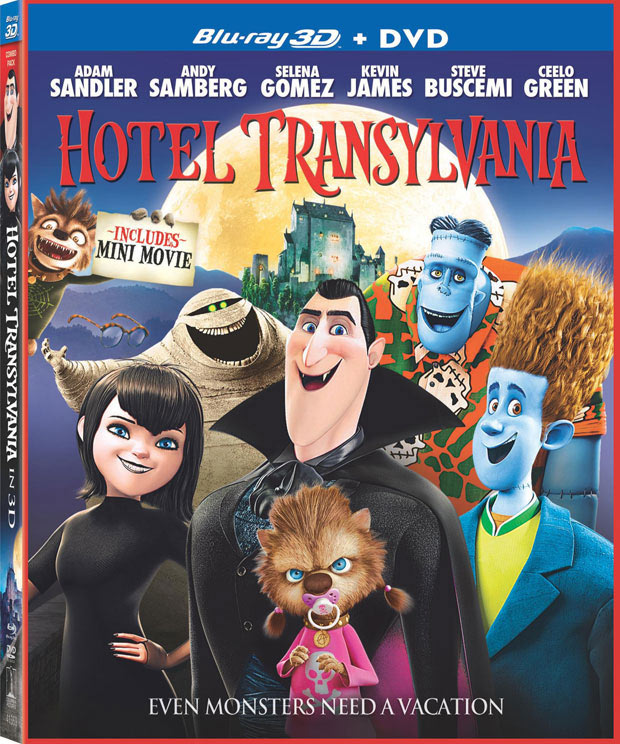 Culver City, Calif. (November 27, 2012) – Check in and party with Dracula, his daughter Mavis, Frankenstein, the Mummy, the Invisible Man and the rest of the gang when Sony Pictures Home Entertainment releases HOTEL TRANSYLVANIA on Blu-ray 3D™ Combo Pack, Blu-ray™ Combo Pack and DVD — all with UltraViolet™ — on January 29th. From Sony Pictures Animation (The Smurfs) comes the story of Dracula and his daughter, Mavis, and their life inside a remote hotel that caters to monsters of all kinds. Mavis is about to celebrate her 118th birthday when Jonathan, a pesky human dude, stumbles onto the hotel grounds. Dracula and the hotel staff

move into action, determined to protect Mavis, as well as the lavish resort sanctuary where monsters can vacation in safety far away from humans.

The Blu-ray Combo Pack and DVD contain plenty of kid-friendly extras, including the mini-movie “Goodnight Mr. Foot,” directed by the feature’s award-winning director Tartakovsky; “Problem (Monster Remix)” music video; three deleted scenes; filmmaker commentary and more.  Exclusive to the Blu-ray are three progression reels and two featurettes. “Meet the Staff and Guests: Voicing Hotel Transylvania” takes a look at the cast, their voices, and the fun they bring to the film. “Making The Hotel” features an inside look at how the filmmakers and animators created the Hotel Transylvania.

Welcome to Hotel Transylvania, Dracula’s lavish five-stake resort, where monsters and their families can live it up and no humans are allowed. One special weekend, Dracula (Sandler) has invited all his best friends – Frankenstein and his wife, the Mummy, the Invisible Man, the Werewolf family, and more – to celebrate his beloved daughter Mavis’s (Gomez) 118th birthday. For Dracula, catering to all of these legendary monsters is no problem, but the party really starts when one ordinary guy stumbles into the hotel and changes everything.

All DVD Bonus Features Plus…

The film has a running time of 91 minutes and is rated PG for some rude humor, action and scary images.

Sony Pictures Animation produces a variety of animated entertainment for audiences around the world.  The studio is following its worldwide comedy hits—the 2012 monster hit comedy Hotel Transylvania (3D), the 2011 hybrid live action/animated blockbuster, The Smurfs (3D) and the 2009 mouth-watering Cloudy with a Chance of Meatballs (3D)—with The Smurfs 2 (3D) in July 2013 and a sequel to Cloudy With A Chance of Meatballs (3D) in September 2013.  Sony Pictures Animation, in conjunction with Aardman Animations, has produced two critically acclaimed feature films:  the CG-animated family comedy Arthur Christmas (3D); and the stop-frame animated high-seas adventure, The Pirates! Band of Misfits (3D).  In 2007, Surf’s Up received an Academy Award® nomination for Best Animated Feature Film.  The division, whose first feature film Open Season led to a very successful movie franchise, is turning 10 this year.  Sony Pictures Animation is an operating unit of Sony Pictures Digital Productions.