Dreams Around The Globe Will Once Again Take Flight! 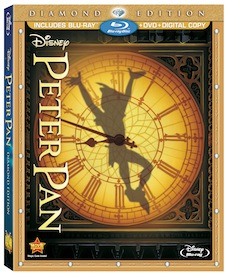 Available For Purchase on February 5, 2013

BURBANK, California, November 2, 2012 –– On February 5, 2013, The Walt Disney Studios celebrates the 60th Anniversary release of Walt Disney’s classic, “Peter Pan,” as it soars to all-new heights – with a new digital restoration and high definition picture and sound – for the first time on Blu-ray™. The classic tale that taught us all “to believe” and first introduced us to the Darling children – Wendy, John and Michael – as they flew with Peter Pan and Tinker Bell past the second star to the right and straight on ‘till morning to the enchanted world of Never Land. Rediscover the magical adventure and relive childhood memories of this great bedtime story.

“Peter Pan” is a timeless classic from Disney’s Golden Age of animation.  The film is one of three to boast all nine ofWalt’s famous “Nine Old Men” as Directing Animators, and is a revered audience favorite.  “Peter Pan” Diamond Edition 3-Disc Blu-ray Combo Pack will be available for a limited time only for the suggested retail price of $44.99 (US) and $51.99 (Canada) fromWalt Disney Studios.

To learn more and keep informed on this release:

For more than 85 years, The Walt Disney Studios has been the foundation on which The Walt Disney Company was built. Today, the Studio brings quality movies, music and stage plays to consumers throughout the world. Feature films are released under the following banners: Disney, including Walt Disney Animation Studios and Pixar Animation Studios; Disneynature; Marvel Studios; and Touchstone Pictures, the banner under which live-action films from DreamWorks Studios are distributed. The Disney MusicGroup encompasses the Walt Disney Records and Hollywood Records labels, as well as Disney Music Publishing. The Disney Theatrical Group produces and licenses live events, including Disney on Broadway, Disney On Ice and Disney Live!.