There’s more than one way to take a life…

On Blu-ray™ and DVD with UltraViolet™ December 24th

As well as All-New, Behind-the-Scenes Footage 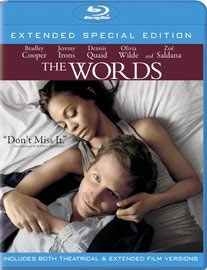 with UltraViolet™.  Bradley Cooper (Limitless) stars as Rory Jansen, a young literary hopeful who risks it all to become a success. While on their honeymoon in Paris, Rory and his wife Dora, played by Zoë

Saldana (Colombiana), step inside an antique shop where they find a briefcase that will later reveal the key to the career he has always desired… but the find comes with a steep price.  Thisdramatic story within

a story exposes the strong effects that life’s choices can have on us all. The film also stars Jeremy Irons (Margin Call), Dennis Quaid (The Day After Tomorrow), Ben Barnes (The Chronicles of Narnia: Prince

The Blu-ray and DVD both come with the Extended Special Edition of the film, featuring an alternate ending, as well as two featurettes: “Unabridged: A Look Behind the Scenes of The Words” provides an

in-depth look at the making of the film; while “A Gentleman’s Agreement” gives a look at how Cooper and the filmmakers found THE WORDS. Exclusive to the Blu-ray are two additional featurettes: “Clay

“There’s more than one way to take a life…” and there are no truer words.  Rory Jansen (Bradley Cooper) has achieved his every goal: a loving wife, critical success and a best-selling novel. The only problem, he’s

risked everything he values because his success is not entirely his own.  Now, as his conscience starts to haunt him and his past wrongs are revealed, he uncovers the steep price that must be paid, throwing his whole world and relationship into jeopardy.   The consequences may just affect the legacy of himself as well as those closest to him.  Jeremy Irons, Dennis Quaid, Olivia Wilde, Ben Barnes and Zoë Saldana star in this

romantic thriller that keeps you guessing until the very end.

THE WORDS is written and directed by Brian Klugman and Lee Sternthal (both TRON: Legacy), graduates of the Sundance Screenwriters Lab, produced by Jim Young (Lovelace), Tatiana Kelly (Wristcutters: A

Both the theatrical and extended versions of the feature film, plus two featurettes:

DVD special features, both the theatrical and extended versions of the film, and two featurettes exclusive to the Blu-ray:

THE WORDS has a running time of 96 minutes and is rated PG-13 for brief strong language and smoking.