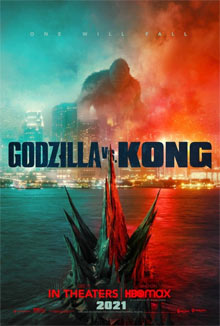 When Godzilla inexplicably attacks the shore of Pensacola, FL, a team of scientists enlist the help of Kong to journey into the Hollow Earth in hope to find an energy source strong enough to stop Godzilla from attacking again.

Through Warner Bros.’ self-proclaimed MonsterVerse, the studio has been building to this movie since they released their 2014 solo Godzilla outing. That film was followed by 2017’s Kong: Skull Island, a story set in the 1970’s that reintroduced the monstrous gorilla to a new generation of fans. Finally, five years since we last saw the giant lizard, 2019’s Godzilla: King of the Monsters saw the kaiju battling all kinds of beasts to be crowned the king of all monsters. Now, after a year-long delay, we have the ultimate showdown between two of the most powerful monsters in Godzilla vs Kong – and there will be only one definitive winner.

The past decade has seen some pretty dramatic – and sometimes disappointing – versus films. It began in 2015 when Batman picked a fight with Superman in Batman v Superman: Dawn of Justice, and continued a year later when Iron Man and Captain America had a falling out in Captain America: Civil War (and in my opinion, the latter Marvel effort was a considerably better and more emotional film). 2021’s Godzilla vs Kong is an exciting concept for sure, but it actually isn’t the first time these two have fought. In 1963, King Kong vs. Godzilla first pit the two against each other, but a lot has changed in 58 years – especially filmmaking technology. There’s no better time than now to bring these two beasts to the big screen.

Sadly, the big screen isn’t what it normally is right now, being that we’re still in the midst of a global pandemic. Thankfully, HBO Max is also streaming Warner Bros’ movies the same day they hit theaters, even debuting them online right at midnight (PT). So if you’re not up for sitting in a movie theater for 2 hours with a mask on, you can still enjoy the film in the comfort of your own home (or even on a mobile device). While I’d love to see a face-off like this on an IMAX screen, I opted for a first watch at home to be able to screen it first for our Godzilla-obsessed 10-year-old son. And while I miss the massive display for larger-than-life characters, the movie looks beautiful streaming in 4K. And that sound booms!

The movie picks up a couple years after the events of Godzilla: King of the Monsters. Millie Bobby Brown returns as Madison, while a new cast of characters that includes Rebecca Hall (The Prestige, Iron Man 3) and Alexander Skarsgård (The Legend of Tarzan, Big Little Lies) join Team Kong. Even though King of the Monsters had some delicious monster action sequence (I mean, c’mon, how cool was Ghidorah?), the human storyline was kind of stupid. The monsters were awakening because of a device that had been created to somehow “speak” to the monsters (And the story’s villains wanted the monsters’ rule to reshape the world). Since Godzilla must fight them to keep the pecking order looking his way, the big lizard was the reigning champ to beat. To make the human story all that more troublesome, there really wasn’t even a likable character in the bunch (and the arguably likable ones ended up dying at some point). Even Millie Bobby Brown, who was introduced to the world as the lovable Eleven in Netflix’s Stranger Things was anything but endearing. Thankfully, Godzilla vs Kong largely fixes this. Even Millie’s return as Madison is far warmer this time around. She’s accompanied by a conspiracy theorist named Bernie, played by Brian Tyree Henry, who’s so kooky that he’s likable – even though he feels like he’s a renegade from a Roland Emmerich disaster film – and Deadpool‘s Julian Dennison, who still seems like he thinks he’s funnier and more charming than he actually is. It’s an odd mix of characters, but for a kaiju / disaster movie, we’ve done a lot worse before (take the 1998 Godzilla movie – speaking of Roland Emmerich – as Exhibit A). Kaylee Hottle makes her acting debut as Kong’s number one fan, Jia, and she’s cute and sweet – just the kind of traits you need for a character like her. She doesn’t need a wide acting range for the part, but she’s further proof that a good child actor is tough to find (examples of bad casting include Nico Parker in 2019’s Dumbo and Lucian Perez in Wonder Woman 1984, both who gave more wooden performances than any given inanimate set piece in their respective films).

But hey, you don’t watch a Godzilla vs Kong movie for the human actors. Sure, they’re a necessary “evil,” so to speak, which is why they’re still very important, but we’re here to see the main title characters duke it out. Thankfully, Godzilla vs Kong delivers. It takes a bit to get going, and it primarily follows Kong’s character, fleshing him out the most since he’s the least built up of this MonsterVerse film series, but when the action lets loose – it’s pretty great. Director Adam Wingard makes an effort to show angles and sides of Godzilla we haven’t already seen over and over, and when the two big guys throw down, it’s a thing of beauty (in a destructive, popcorn-munching entertainment sense, of course). The climax of the movie doubles (triples?) down on the action for a scene of mass demolition that would make Zack Snyder’s mouth water. (We even have his frequent composer Tom Holkenborg – AKA Junkie XL – providing the score this time.) I don’t want to spoil too much, but Godzilla vs Kong is a lot of fun and a feast for the eyes.

The content is dialed back a little from Godzilla: King of the Monsters and Kong: Skull Island. This movie has some serious Pacific Rim vibes visually and action-wise, but the language is a little less frequent and in-your-face than it was in King of the Monsters (and the human characters are a bit less “angry” and prone to shooting each other this time around). There is still a handful of uses of the “S” word, mostly from Dennison (and an incomplete “what the f–” from Skarsgård), and a couple uses of “Oh my G-d” as an exclamation, as well as one use of “g*dd*mn” from the film’s villain. There is no sexual content, and blood/gore is also infrequent, as it’s mostly shown when Kong rips apart some creatures in a scene or two. There is a wealth of destruction, as I mentioned above, which will surely be harrowing to some, especially when the action makes its way on land and towering building after towering building comes tumbling down.

Overall, Godzilla vs Kong is hardly a masterpiece, but it’s definitely a rip-roaring good time at the movies. Its visually rich action sequences certainly make it rewatchable, but if senseless monster movies aren’t really your thing, you can skip it. For the rest of us, however, it delivers what we came here for.

Alcohol/Drugs: Bernie carries whiskey in a bottle in a gun holster; We see Simmons drinking alcohol from a glass in a couple scenes; Bernie takes his flask out to drink from it but Josh pours it out before he can.

Blood/Gore: Some spoilers ahead: We see blood on Kong’s teeth when he’s eating handfuls of fish; We see a small bloody cut on Nathan’s forehead; Kong whips a war bat to the ground and green goo comes from its mouth. He rips another war bat in half and spills green blood all around him. He then eats some of the inside of its decapitated head; We see some blood on the ground in a facility and a dismembered creature eye; A large robot blasts through a skullcrusher and cuts it in half, with green blood and goo splashing from it. We then see the green goo splatter onto the windows above Maddie, Josh and Bernie; We see Godzilla’s claws scrape up Kong’s chest briefly; Nathan has more bloody scrapes on his face.

Violence: Some spoilers ahead: Kong throws a sharpened tree trunk into the air and it crashes into a dome above him; The opening credits show footage of explosions, Godzilla fighting footage from the first 2 movies, and skeletons and muscle drawings and x-ray profiles of the monsters from previous movies; Planes shoot missiles at Godzilla and he fires back with his atomic breath and swats some out of the sky. We see explosion on the ground as he attacks a scientific plant in Florida; Some security guys point their tazer guns at Bernie. A wall explodes knocking them all over; Godzilla’s atomic breath tosses vehicles and people in the air with fire and explosions; A convoy shoots missiles at Godzilla who plows through a the middle of a battleship. The anchor of half of the ship clips onto Godzilla’s back and we see him dragging it through the water; Godzilla’s tail destroys a plane and two more ships. Godzilla jumps out and hits Kong who is chained to the deck of a cargo ship, causing it to flip over. People are trapped in the capsized boat until Kong breaks free and rights the ship; Godzilla and Kong fight/struggle underwater; Kong jumps on one carrier, causing damage to it, and then jumps to another and grabs a jet from the deck and throws it at Godzilla (The pilot bails out). Godzilla then also jumps onto the ship and they fight each other. Kong throws Godzilla into the water. Godzilla blasts through the carrier with his atomic breath and they continue to fight under the water. Godzilla drags him down with his tail wrapped around him; A ship on the surface drops depth charges which go off, freeing Kong from Godzilla’s grip; Kong and the pod ships fall through a tunnel then through the sky into the Hollow Earth; Kong whips around and beats a pair of war bat creatures. He whips one to the ground and green goo comes from its mouth. He rips the other in half and spills green blood all around him. He then eats some of the inside of its decapitated head; A crab spider is eaten by a dinosaur; We see some blood on the ground in a facility and a dismembered creature eye; A large robot blasts through a skullcrusher and cuts it in half, with green blood and goo splashing from it. We then see the green goo splatter onto the windows above Maddie, Josh and Bernie; Godzilla comes ashore in Hong Kong and crushes a bridge. Pandemonium ensues as people run through the streets; Godzilla fires his atomic breath into the ground; Bat-like creatures wake up underground and attack the people there. One is carried off. One jumps on a man and bites him as he screams and then it flies off with him; Kong takes a pod that’s shooting at him and crushes it in his palm, killing those inside; Kong and Godzilla fight in the streets of Hong Kong with lots of city destruction and buildings collapsing. Kong wields a large ax which sticks in Godzilla at one point. Godzilla scrapes up Kong’s chest, who cries in pain; A robot smashes through an office, killing a man (no detail of his death is seen); A man is electrocuted in a pilot’s chair (we just see electricity surge through him and he slumps forward); A robot burns up part of the city and shoots rockets at Godzilla. It slams Godzilla into buildings repeatedly and roughly; A ship explodes to jumpstart a creature’s heart; Kong slams his shoulder into a building to pop it back in place; Some creatures fight a robot and tear it apart with fluid spilling everywhere from it.