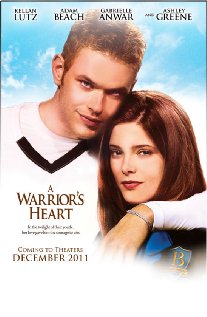 A Warrior’s Heart tells the story of teenager Conor Sullivan (Kellan Lutz), a gifted lacrosse player who is egocentric and thinks only of himself.  His father (Chris Potter), a respected Marine-officer, gets Conor transferred into a private school with an outstanding lacrosse program.  When his father is called back to serve and gets killed in Iraq, Conor, torn up after his dad’s death, becomes sullen and raging angry both on and off the field. His behavior gets him kicked off the team.  Enter Sgt. Major Duke Wayne (Adam Beach), a full-blooded Iroquois and former Marine comrade of his father’s who happens to know a lot about lacrosse.   Duke shows Conor some hard discipline, bringing out his passion for the sport and eventually helping him to work off his anger and discover the warrior within himself.

“A Warrior’s Heart is a story that demonstrates the valuable lesson that we all have a little warrior spirit in us that can bring us out of our darkest hours,” said Leslie Glenn Chesloff, EVP, Programming, GMC TV.  “It’s a dual pleasure to bring this heartwarming film to our viewers and to showcase this attractive cast in roles that are outside of their normal fare.”

A Warrior’s Heart is directed by Mike Sears. Written by Martin Dugard.  Producers are Mark Spizzirri and Steven Istock.

GMC TV (www.watchGMCtv.com) is America’s favorite network for uplifting music and family entertainment. The Parents Television Council ™ has twice awarded its Entertainment Seal of Approval™ to GMC TV for being “an authentic family-friendly cable network.” The network presents original and acquired movies, series, stage plays and music specials along with gMovies, the first faith-friendly streaming movie service. The GMC TV brand is reflected in “Uplift Someone,” the network’s successful pro-social initiative.    GMC TV can be seen in more than 59 million homes on various cable systems around the country, as well as DISH Network on channel 188, DIRECTV on channel 338 and Verizon FiOS on channel 224. Follow GMC TV on Facebook and Twitter at http://facebook.com/gmctv and http://twitter.com/gmctv.