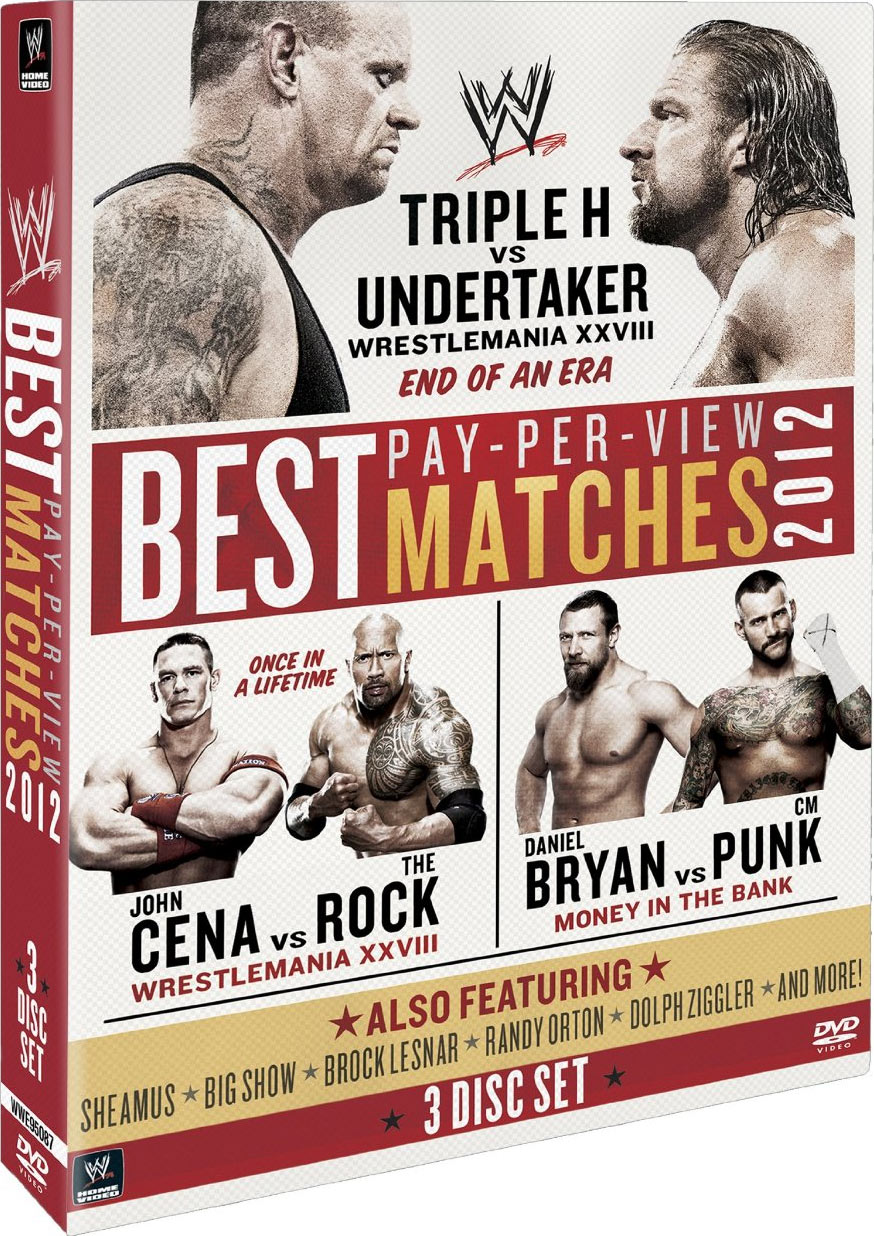 DVD Review
World Wrestling Entertainment has been the standard in professional wrestling for decades, winning the ratings battle on a weekly basis for all of its televised programming. They’re also infamous for massive, worldwide sales of their monthly Pay-Per-View events, such as Royal Rumble, Wrestlemania, SummerSlam, and more. 2012 came and went with a plethora of fantastic matches at these Pay-Per-View events, and WWE Video decided to compile a handful of them for their latest DVD set; simply-titled, it’s The Best Pay-Per-View Matches of 2012.

The standard WWE DVD set contains three discs, which is what we get here. Depending on the format of the DVD set, the viewer can get anything from interviews with WWE Superstars to matches to montages. With The Best Pay-Per-View Matches of 2012, there are a total of eleven matches, in chronological order, with WWE play-by-play commentator Scott Stanford providing some background on a few of the bigger matches. Full disclosure, some of the matches are great on their own merit, while some are made extra special because of the storyline, angle, or history of the competitors, such as the Wrestlemania 28 match between two legends, Triple H and The Undertaker (with Shawn Michaels as special guest referee). Those Superstars are some of the biggest and most defining names in all of the WWE’s history, and the added angle of The Undertaker’s Wrestlemania undefeated streak (which, before that match, was 19-0) made the match a highlight of that night, going on to win Match of the Year for 2012. And then of course, it took place inside the steel structure known as “Hell in a Cell,” a factor that only the seasoned wrestling fan could truly appreciate. Triple H’s other match in this set, and only other match in 2012 (he’s the company’s real-life Vice President of Talent and Live Events) was against the former Ultimate Fighting Championship competitor Brock Lesnar. The storyline at the time that led up to this match was Lesnar’s raging ego wanting to take over the company, even going so far as to attack Triple H and break his arm (Triple H does play the executive role on television as well). With the animosity and tension at an all-time high for the two, their match became less a wrestling match and more of a street fight. With WWE’s current policy of creating TV-PG rated content, fights like this are a little less believable, considering that blood is a no-no, but the fight was still pretty vicious, and the two exploited each other’s real-life problems, such as Lesnar’s history with stomach issues. It may not be one for the kids to watch.

One of the best in professional wrestling today, and self-proclaimed best in the world (which is hard to argue), CM Punk held the WWE Championship – their biggest title – for the entirety of 2012, so it’s no surprise to see several of his matches here. His bout with Dolph Ziggler at Royal Rumble is the first of three featuring the champ. The other two are arguably the best matches on the entire set – the year even – as far as overall performance. CM Punk vs Daniel Bryan at Money in the Bank is the embodiment of what professional wrestling should be. We all know professional wrestling is scripted, but what makes it great is when two prime performers get into the ring and put on a show that makes you feel like the feud they’ve been having is legitimate. Daniel Bryan and CM Punk are two of today’s Superstars that will go down in the annals of WWE history as some of the greats; definite future Hall of Famers. Punk’s match with John Cena from Night of Champions is also a classic, with loads of intensity and Punk’s new heel persona and cockiness earning him a lot of heat. If you’re the type to rewatch DVDs of this nature, you won’t find yourself skipping over CM Punk’s matches. You’ll probably also want to rewatch the “Once In A Lifetime” match between The Rock and John Cena from Wrestlemania 28. The match was scheduled the day after Wrestlemania 27, giving it a full year’s worth of hype and build-up for what promised to be one of the greatest matches of all time. While it didn’t quite live up to my expectations, it was still a great match between two of the best. (Fun fact: WWE aired an hour-long special the weekend of Wrestlemania 28 about the lives of The Rock and Cena, and the special made us of “We Were Giants” by House of Heroes, several months before Cold Hard Want was released!)

No doubt it was difficult to narrow down the matches to the eleven included, and honestly, another disc or two may have been a good idea (unconventional as it would be for a standard WWE DVD) to really give the viewer the best of 2012. Now, I could have done without the match between Layla and Beth Phoenix from Over the Limit, and the set is strangely missing any content from Extreme Rules (where John Cena fought Brock Lesnar in a brutal match that would’ve fit in well) and the last two Pay-Per-Views of the year, Survivor Series and Tables, Ladders & Chairs (a great addition from the latter would’ve been Daniel Bryan, Kane, and Ryback vs The Shield), but what made the final cut is a good chunk of the best. Unexpected entries included Layla vs Beth Phoenix, Christian defending his Intercontinental Championship against Cody Rhodes at No Way Out, and Randy Orton’s fight with Dolph Ziggler at Night of Champions. Rhodes, Orton, and Ziggler are terrific at what they do, though, so these matches were worth watching.

Those interested in the content of this set should keep in mind that, since 2008, WWE has made it a policy to provide PG content for all of its programming (forsaking its former Monday Night Raw rating, TV-14), so the blood-soaked matches, harsh profanity, near nudity, and what have you that earned WWE a bad rap in the late 90s is a thing of the past. Some language is still used throughout the programs, but it’s light enough to earn the PG rating. There are plenty of uses of “Oh my God,” and even a few occasions where you see a possibly mouthed f-word. The term “Hell in a Cell” is used frequently, pertaining to a type of match two of the Superstars are in, and one of the Pay-Per-Views titles. And of course, the violence throughout is professional wrestling violence and is performed by trained professionals and athletes. The WWE even takes great measure to not condone anyone trying this in their own home (or backyard or wherever) by putting a PSA at the beginning (that you can’t skip through) that shows the consequences of doing what these guys do. That being said, in addition to the standard professional wrestling moves and suplexes, there are a couple of no holds barred matches where Superstars make use of weapons, such as steel chairs, tables, and sledge hammers. The action can get a little intense sometimes, but knowing that they know what they’re doing and are just putting on a show makes it easier to swallow.

If you’re a WWE fan and you didn’t get a chance to order all of the Pay-Per-Views, such as myself, then The Best Pay-Per-View Matches of 2012 will catch you up on some of the future classics you missed. This is a good idea that I hope the WWE will continue with on a yearly basis. Despite some of the poor writing that the WWE has been known for lately, Superstars like CM Punk, Dolph Ziggler, Daniel Bryan, and more, really put an emphasis on technical skill this past year, and I’m glad to see the WWE captured it and referred to it as part of the best of 2012. Don’t miss your chance to own these matches. Now let’s come up with some better names for Pay-Per-View events!
– Scott Fryberger, (reviewed: 1/26/13)

Sex/Nudity: Most of the male wrestlers wear only trunks or shorts, sometimes inadvertently showing small amounts of buttocks; Triple H makes the D-Generation X “suck it” motion; some female singers wear fairly revealing outfits and/or dance provocatively during a couple of live artist performances; a couple female wrestlers wear outfits that show some cleavage and midriffs

Alcohol/Drugs: Beer is generally served at any stadium, and you see audience members drinking beer on a couple of occasions

Violence: Professional wrestling, in-ring, is based on various suplexes, submission holds, punches, and kicks. In addition to the basics, other violence includes: someone hits a wrestler in the head with a microphone; a couple of wrestlers get thrown into the steel ring steps (or get the steps used on them as a weapon); two types of matches include steel structures surrounding the ring – several times, wrestlers throw their opponents directly into the structure; Triple H showers the Undertaker with multiple steel chair shots to the back (the Undertaker does the same to Triple H); Triple H hits the Undertaker with a sledgehammer (his hand covers the head of the sledgehammer, and it’s obvious that his hand hits Undertaker and not the sledgehammer itself, but it’s still graphic – Undertaker also does this to Triple H); CM Punk and Daniel Bryan exchange multiple hits with a Kendo stick (a type of Japanese bamboo fighting stick); Daniel Bryan hits CM Punk with multiple chair shots to the back; CM Punk slams Daniel Bryan onto a steel chair; several images of Brock Lesnar fictitiously breaking Triple H’s and Shawn Michaels’ arms in a montage (it looked very real); the fight between Brock Lesnar and Triple H gets very intense, almost turning into a street fight more than a wrestling match. They share intense punches, kicks, and submission holds throughout that, at times, almost seem to stem from real-life heat between the two; Triple H launches Lesnar stomach-first into the corner of an announcer’s table, followed by two hard punches to Lesnar’s stomach (exploiting Lesnar’s real-life stomach issues); Brock Lesnar breaks Triple H’s arm in a match (again, looks very real, and is shown again in a replay); CM Punk hits John Cena in the head with the WWE Championship belt (shown again in a replay)