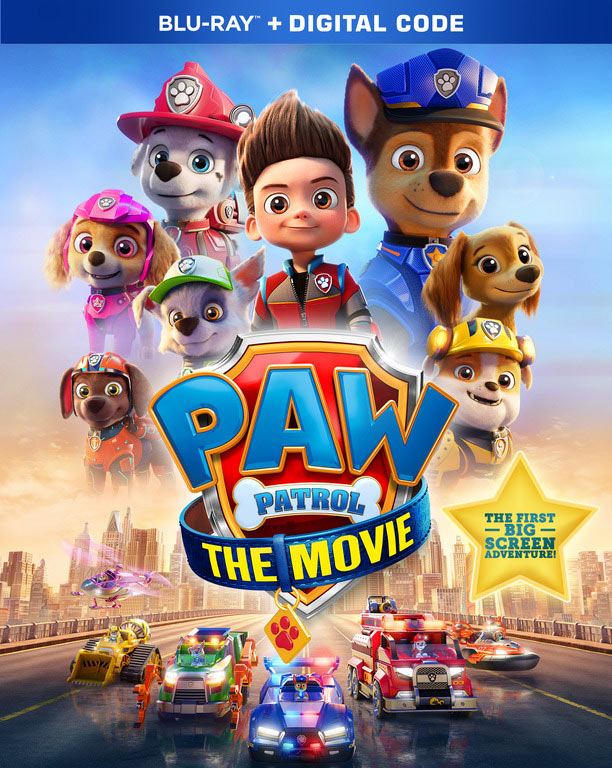 HOLLYWOOD, Calif. – Get ready for PAW-some action and a PUP-tastic adventure when PAW PATROL: THE MOVIE™, from Paramount Pictures, Nickelodeon Movies and Spin Master Entertainment, becomes available to purchase on Digital* September 21, 2021 with exclusive, never-before-seen bonus content from Paramount Home Entertainment. In addition, the film will arrive on Blu-ray & DVD November 2, PAW-fectly timed for Thanksgiving family viewing or holiday gift-giving.

“Filled with non-stop adventure, action, and heart” (Kami Allen, The Momma Diaries), PAW PATROL: THE MOVIE follows the beloved pack as they fight to save the citizens of Adventure City from their rival, Humdinger. With new headquarters, new gadgets and vehicles, and even a new pup named Liberty, the PAW Patrol is on a roll in an epic adventure that’s “funny, delightful, and heartfelt.” (Avi Offer, NYC Movie Guru).

The Digital* release of PAW PATROL: THE MOVIE features hours of entertainment with exclusive bonus content, including a look at the PAW-some team, additional news reports with reporter Marty Muckraker (Jimmy Kimmel), and a sing-along with a reimagined PAW Patrol theme song lyric video. Available with purchase only on participating digital platforms, see bonus television episodes from the wildly popular Nickelodeon series (produced by Spin Master Entertainment), including one never-before-seen episode, and a never-before-seen episode of “Blaze and the Monster Machines.” Details on the bonus content are listed below.

PAW PATROL: THE MOVIE Synopsis
The PAW Patrol is on a roll…in their first big-screen adventure! When their rival, Humdinger, becomes Mayor of nearby Adventure City and starts wreaking havoc, Ryder and the heroic pups kick into high gear to face the most challenging mission of their PAW Patrol careers. Along the way, the team finds help from a new ally, the savvy dachshund Liberty, and together the PAW Patrol fights to save the citizens of Adventure City! Can the PAW Patrol save the city before it’s too late? After all, no city’s too big, no pup’s too small!

About Spin Master
Spin Master Corp. (TSX:TOY) is a leading global children’s entertainment company creating exceptional play experiences through a diverse portfolio of innovative toys, entertainment franchises and digital games. Spin Master is best known for award-winning brands PAW Patrol®, Bakugan®, Kinetic Sand®, Air Hogs®, Hatchimals®, Rubik’s Cube® and GUND®, and is the toy licensee for other popular properties. Spin Master Entertainment creates and produces compelling multiplatform content, stories and endearing characters through its in-house studio and partnerships with outside creators, including the preschool success PAW Patrol and nine other original shows along with multiple short-form series, which are distributed in more than 190 countries. The Company has an established digital presence anchored by the Toca Boca® and Sago Mini® brands, which combined have more than 55 million monthly active users. With close to 2,000 employees in 28 offices globally, Spin Master distributes products in more than 100 countries. For more information visit spinmaster.com or follow on Instagram, Facebook and Twitter @spinmaster.

Endorsement Guidelines: Paramount Pictures Corporation and Paramount Home Entertainment (collectively “Paramount”) are not requesting or requiring any online or social media coverage, publication, or posting (i) in connection with this press release or (ii) in exchange for any products, materials, services, or any other benefit provided to recipient (“Recipient”) by Paramount in connection herewith. Recipient agrees that any social media posts or public statements made by Recipient in connection with this press release, any products, materials, services, or benefit provided to Recipient by Paramount will comply with all applicable laws, rules, regulations, guidelines, and/or policies (collectively, the “Laws”), including, without limitation, those concerning endorsements and testimonials in advertising in the territory(ies) in which Recipient resides and/or in which Recipient’s posts will be featured (for example, in the United States: Federal Trade Commission (“FTC”) endorsement disclosure guidelines, FTC FAQs, and “Disclosures 101 for Social Media Influencers,” all available at https://www.ftc.gov/influencers)). To the extent required by any Laws, Recipient shall include an accurate, clear, and conspicuous disclosure of any relationship between Recipient and Paramount in language that is easy to understand and in a noticeable manner.