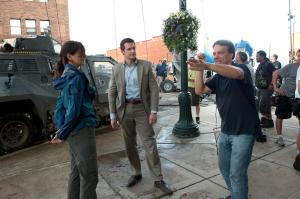 Q: What is it like directing actors with the added distraction of extreme weather elements?

A: It was a real challenge to get a performance with all the distracting noises of the wind machines and rain towers.  The loud noise of the equipment made communication very difficult and I had to rely on hand signals.  One advantage to all the wind and rain is that it gave the actors something real to play against when shooting with green screens.

Q: What is the most exciting part about directing high-energy, intense films?

A: The most exciting thing about directing high-energy, intense films is taking the audience into a world that feels real.

Q: What can you tell us about Titus and how similar is it to a real storm chasing vehicle?

A: The Titus was designed by David Sanderford and has the same functions that a real storm chasing vehicle would have.  The most important features are two hydraulic outriggers that can fire spikes into the ground to hold the vehicle in place during the 100 mile per hour winds of a Tornado.  The Titus also has a motorized turret that allows a camera to photography a 360 degree view of any severe weather systems.

Q: What special features can we expect to see on the Blu-ray / DVD?

A: The Blu-ray/DVD for “Into the Storm” will have several behind the scenes features showing how we were able to realistically recreate the weather conditions of a tornado.  It also has a segment where world famous storm chaser Reed Timmer explains all of the types of tornados in or film and how they compare to the real ones that he has chased.

Q: What interested you in this story and joining as Director?

A: What attracted me to “Into the Storm” is being able to take the audience right into the center of a tornado.  To experience what it is like to see and hear the unimaginable power that a tornado can unleash.  I also wanted to explore how different people react to such an extreme event.

Q: How is Into the Storm different from previous tornado movies?

A: “Into the Storm” benefits from the advances in visual effects over the years so the tornados look much more realistic.  It also differs from other tornado movies in that we are not just following storm-chasers –  we have a  diverse group of unrelated people who are thrust together during the adversity of the storm and we get to experience how each of the different people react under the pressure of the storm.

Q: How does the film mix big visual effects with a grounded human element?

A: You experience the tornados through the eyes of the main characters and thus you have a vested interest in what everyone does.

Q: You have an extensive background in visual effects.  Tell us about what went into making this film look and feel real.

A: The most important thing to make this film look real was weeks and weeks of extensive research.  I studied every single video of any severe weather and tornado footage I could find.  Every major type of tornado was based on actual footage of real tornados.  In addition to the visuals I insisted on having the sound feel as real as possible and that is where academy award winning sound supervisor Par Hallberg shined with his amazing soundscape.  You really feel like you are in a tornado with the rumbling sound.

Q: Did the film require practical effects in addition to visual effects?

A: The films visual effects work so effective because they are a mix of practical physical effects such as wind machines and rain towers combined with the digital tornados and debris.  For the last half of the film, almost every shot required rain and wind machines.  We dropped a real truck in close proximity with Richard Armitage.

Q: How did the tornadoes act like characters in the film?

A: “Into the Storm” has several different types of tornados ranging from thing rope tornados, fire tornado to a large two mile wide wedge shaped tornado.  Each of these tornados act like characters in that they have unique qualities that make them different.

Q: Why do you think audiences are so interested in disaster films?

A: People are always drawn to what scares them and they love to experience something that takes them on a thrill ride in the safety of movie going experience at home or in the theater.