THE LEGENDARY JANE WITHERS AND SOME

MANUFACTURE-ON-DEMAND SLATE FOR THE MONTH OF APRIL

First Time Ever April 12 in Honor of Her Birthday

Additional Collection of 25 Classic Films to Follow on April 16 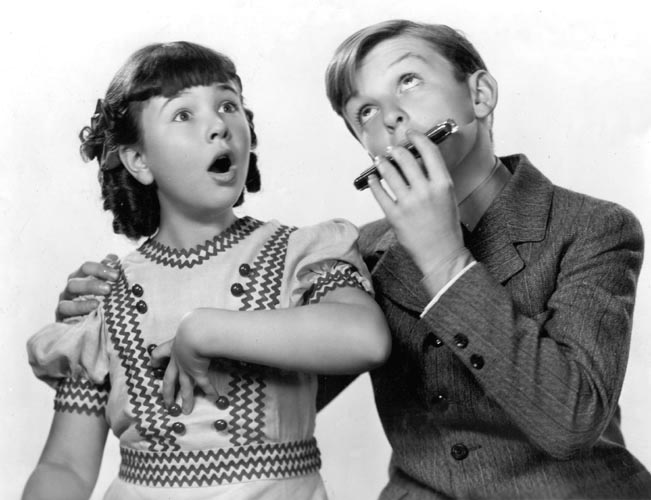 LOS ANGELES (April 12, 2013) – In celebration of her 87th birthday, Twentieth Century Fox Home Entertainment announced today the release of seven classic films to the manufacture-on-demand (MOD) series, Fox Cinema Archives, from the 1930s and 1940s featuring legendary child star Jane Withers. Watch the exciting adventures and mysteries unfold in these classic films from the comfort of your home available on DVD for the very first time April 12.

Born on April 12, 1926 in Atlanta Georgia, Jane Withers began acting and singing at only 3 years old. Her big break came at the age of 8 when she landed a role alongside Shirley Temple in Bright Eyes. An honoree of the Former Child Star “Lifetime Achievement” Award from the Young Artist Foundation, Jane Withers is known for being one of the most popular child film stars of the 1930s and early 1940s becoming one of the top 10 box-office stars of the time.

A supposedly orphaned prankster trapped in a terrible orphanage discovers she is actually the daughter of a prominent lawyer. She helps her best friend get adopted before being reunited with her father who has been searching for her.

An amnesiac socialite works as a fortune teller to raise enough money for an operation to regain her memory. With the help of a traveling troupe, she regains her memory only to discover she is engaged to a man she doesn’t love.

Based on a novel by Barry Benefield, Addie Fippany along with her family travel the country-side in a mule-drawn wagon trading trinkets to farmers for chickens. Addie and her father love the care-free life, but Mrs. Fippany and Addie’s sister want to settle down in New York City. Once the family reaches New York, Addie ends up in a whole bunch of mischief.

A rambunctious Texas ranch teenage girl is sent to a fancy school in San Antonio where she learns to behave in proper fashion and get along with others after making a series of mistakes.

A farmer works on a canal boat in an effort to save money to buy a farm. He meets his wife on the canal who is a cook on the boat. Conflict arises when she can’t imagine leaving the carefree life on the canal for a banal life on a farm.

Paddy, a young girl, travels to the United States from Ireland to meet her mother who is already living in the country. Shortly after arriving in New York, she learns her mother has recently died. Paddy takes refuge to avoid being deported and survives by working as an entertainer.

A horse trainer finds romance with the millionaire man who bought her grandfather’s farm after he was forced to sell the land.

Zany goings-on aboard a Navy ship fly when a girl reporter stows away and an Indian crew member brings a live turkey aboard, throwing the entire Navy into confusion. This hilarious musical stars Pat Boone, Buddy Hackett and Barbara Eden.

Shirley Jones and Max Bygraves star as the parents of the title character, an infant who talks like an adult. Bygraves is the only one who hears the infant speaking, leading others to believe he is losing his mind.

A song-and-dance man stationed in Japan in World War II goes AWOL to follow his wife, a member of an entertainment unit who has rejected him because of his many affairs. This World War II comedy features Betty Grable, Dan Dailey, Danny Thomas, and Dale Robertson.

A musical romance and intrigue in Central America occur when a boy and girl are betrothed by their families but are in love with others. The musical stars Dick Haymes, Vera Ellen, Cesar Romero, Celeste Holm, and Ernesto Lecuona.

Shot by a jealous husband and lost at sea, Charles finds himself returned to the world as a woman named Charlie in the zany comedy starring Tony Curtis, Debbie Reynolds, Pat Boone, Joanna Barnes, and Ellen Burstyn.

The life of vaudeville performer Eva Tanguay, and the people with whom she lived and loved, is given lavish treatment. I Don’t Care Girl stars Mitzi Gaynor, David Wayne, Oscar Levant, Bob Graham, and George Jessel.

A glimpse into the life of writer and poet Edgar Allan Poe, his unhappy childhood, the women who loved him, and his driving ambition to write. This intense biography stars Shepperd Strudwick as the beloved author, Linda Darnell, Harry Morgan and Virginia Gilmore.

After adopting a ruthless persona for himself, a kindly small town lawyer finds big city success, but loses himself and his girl in the comedy starring Jack Benny as the “meanest man” and his girl, Priscilla Lane.

When the marriage of a Broadway musical star and her producer husband breaks up, he feels she is only in love with money and she sets out to win back his love. This comedy stars Betty Grable, Macdonald Carey, and Rory Calhoun.

The Model and the Marriage Broker (1951)

Based on a novel by John Steinbeck, the film is the story of a small town in Norway that resists German occupation during World War II. The Moon is Down provides excellent action-packed performances by Cedric Hardwicke, Henry Travers and Lee J. Cobb.

A successful businessman, Mr. Pennypacker, has two wives and two sets of children in two different cities – what will he do when one wife finds out about the other one? This love triangle stars Clifton Webb, Dorothy McGuire, Charles Coburn, Jill St. John, and Ron Ely.

Russia’s Catherine the Great falls in love with a handsome young army officer who is really a revolutionary plotting her downfall that stars Tallulah Bankhead as the Empress, Charles Coburn, Anne Baxter, William Eythe, and Vincent Price.

Three manicurists get their shot at fame when one inherits a ferryboat, which they turn it into a successful floating nightclub. This hysterical musical stars Alice Faye, Tony Martin, Joan Davis, and Marjorie Weaver.

As part of his research for a book on suburban life, self-described genius Mr. Belvedere takes a job as a babysitter for three hard-to-handle children. Sitting Pretty features Robert Young in an Oscar nominated performance, Maureen O’Hara, and Clifton Webb.

A young man’s life is adversely affected by the emotional manipulation of his domineering mother in this lush adaptation of D.H. Lawrence’s classic novel. Winner of the Oscar for Best Cinematography and nominated for six more including Best Picture, the star-studded cast includes Trevor Howard, Mary Ure, Dean Stockwell and Donald Pleasance.

Starring Bobby Vinton, Patricia Morrow, and Jack DeShannon, Surf Party features a young girl heads to the beach with her friends to go see her brother, and finds romance, music… and trouble.

A woman tries to mend her relationship with her teenage daughter after the end of her marriage. This emotional Oscar nominated drama stars Ginger Rogers, Michael Rennie, and Mildred Natwick.

When a political candidate is too inebriated to give his campaign speech, the singer from his entertainment troupe gives it for him and ends up voted in as Governor. Starring Dick Powell, Ann Dvorak, and Fred Allen.

As Walter Winchell feuds with bandleader Ben Bernie, a young singer in Ben’s band falls in love in this radio satire that stars Winchell and Bernie as themselves.

An actor who plays a detective on the radio tries to solve a real-life murder. This mystery-comedy stars Milton Berle, and Brenda Joyce.

A young woman is saddled with the task of evicting an entertainment company from a building her aunt owns. When she meets the rag-tag band of musicians, she decides to help them keep their lease. Starring Rod Lauren, Molly Bee, Jo Helton, and Gene McDaniels.