Contains All Five Seasons of the Original Series

For the First Time on DVD 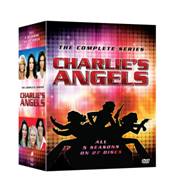 Once upon a time there were three little girls who went to work for a mysterious man they never got to see named Charles Townsend at his Beverly Hills detective agency. And they became the sexiest, eye-popping, crime-stopping private eyes to ever grace TV.

On September 22, 1976, “Charlie’s Angels” premiered, making Kate Jackson, Farrah Fawcett and Jaclyn Smith overnight superstars. The series continued for five unforgettable seasons and included four different sets of Angels. When Fawcett left after the first season (she returned in the third and fourth seasons as a guest star over six episodes), she was replaced by Cheryl Ladd who played her little sister. The fourth season introduced new Angel, Shelley Hack, who replaced Jackson, and in the fifth season, we met the final Angel, Tanya Roberts, who replaced Hack. The show co-starred David Doyle as John Bosley and was produced by TV legends Aaron Spelling and Leonard Goldberg.

Charlie’s Angels: The Complete Series contains all the glamour, guns, hair, bikinis and high-adventure intrigue within 109 action-packed episodes, including the original pilot and the “Angels Forever” featurette!

CHARLIE’S ANGELS: THE COMPLETE SERIES has a run time of approximately 5,483 minutes and is not rated.