“…A fearless combination of clashing tones, a bold experiment in heartfelt
drama and alpha male humor.”

RESCUE ME: THE COMPLETE SERIES

Available for First Time as a Complete Set September 25th 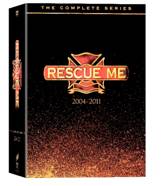 CULVER CITY, CALIF. (August 6, 2012) – All seven seasons of RESCUE ME —the Emmy® and Golden Globe® nominated, critically acclaimed FX series following the lives of New York City firefighters who survived the 9/11 attacks – will be available for the first time in one comprehensive set when Sony Pictures Home Entertainment releases
RESCUE ME: THE COMPLETE SERIES on DVD September 25th.  Starring Denis Leary as veteran firefighter Tommy Gavin, RESCUE ME touched viewers with both its comedy and raw emotion as it portrayed the lives of 62 Truck’s heroes. The 26-disc box set includes all seven seasons with previously released special features, including gag reels, deleted scenes, commentaries and more!

Leary created RESCUE ME with two-time EmmyâAward-winning writer-producer Peter Tolan (TV’s “The Larry Sanders Show,” “Murphy Brown”); both served as executive producers along with Producers Guild of America’s 2005 Visionary Award winner, Jim Serpico (TV’s “The Unusuals”). Most recently, RESCUE ME was one of seven programs to be recognized during the 2012 Television Academy Honors™ for creating positive social change in its focus on issues faced by 9/11 first responders.

The highly acclaimed Rescue Me galvanized audiences with its uncompromising portrayal of the New York City firefighters of 62 Truck, whose duty to save lives puts their own in constant turmoil – on the front lines, in the firehouse and at home.

From series creators Denis Leary and Peter Tolan, Leary is electrifying in his role as Tommy Gavin, a deeply driven first responder with a combustible personality and personal demons to match. Through seven groundbreaking seasons, we follow his gripping story, along with those of his fellow crew. Provocative, profane, dramatic, humorous and unflinchingly honest, it is an unforgettable journey of courage, conflict and ultimate salvation.

RESCUE ME: THE COMPLETE SERIES Special Features Include:

RESCUE ME: THE COMPLETE SERIES has a run time of approximately 4,022 minutes and is not rated.

“Emmy®” and “Television Academy Honors™” are trademarked properties of ATAS/NATAS.

The PGA Awards are the property of the Producers Guild of America.