Faith-Based Film to Debut in the U.S. Digitally and on DVD July 10th 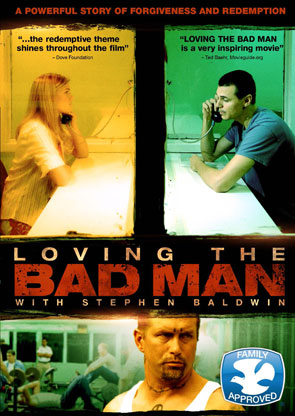 NASHVILLE, TN – (June 12, 2012) – Freestyle Digital Media and Word Entertainment have announced today that they have partnered on the domestic distribution of the new inspirational drama LOVING THE BAD MAN.  The film, starring Stephen Baldwin (“The Usual Suspects”), Christine Kelly (“Salvation Boulevard”) and Arturo Fernandez (“Burn Notice”), was directed by Peter Engert from a script by Engert, Wes Halula and Giovanni Igneri, and was produced by Engert, Stephen J. Brown and Zachary Reeves.  Executive Producers are Tom Conigliaro of Eastlake Films and Steven Ford and Tony Fera.  DVD sell through will be handled by Word Entertainment, a division of Warner Music Group, while Freestyle Digital Media will handle all VOD distribution including online and cable, as well as all DVD rentals stateside through Red Box and other outlets.  The film is slated for a domestic release July 10th, 2012.

LOVING THE BAD MAN focuses primarily on Julie Thompson (Kelly), a young conservative Christian woman who is truly tested by God after deciding to give birth to a child conceived in rape.  The very personal choice leads her on a journey that forces her to explore and redefine her relationships with God, her family, friends and even her rapist Mike Connor (Fernandez), who currently resides in prison.  In order to move forward with her life, Julie, who is still struggling to forgive the man who violated her, boldly goes to the prison and forges an unlikely bond with him.  The ultimate, uplifting message of the film is that we are all part of God’s universe, no matter how good or bad we are.

The film, with its powerful message of forgiveness and redemption, has recently been awarded the Dove Foundation’s seal of approval for family audiences.  The Dove “Family Approved Seal” is awarded to movies, DVDs, made-for-TV movies and specials, books and other entertainment products that portray and encourage positive values.

LOVING THE BAD MAN is also filled with a significant amount of original and popular Christian rock music including songs from The Red Letters Project, The Almost and Everfound.

The distribution deal was negotiated by Susan Jackson for Freestyle Digital Media and by John Chapman, for Word Entertainment.

“Forgiveness and personal choices are universal themes,” said Jackson. “We are happy to be distributing a film which challenges us to think about the relationship between what we believe in and our actions.”

“The portrayal of forgiveness and redemption in the film is a strong example of how we should live and treat each other as believers in Christ,” said Chapman. “Being able to distribute a film with such a life changing message is an honor.”

Tom Conigliaro, Executive Producer of LOVING THE BAD MAN and President of Eastlake films is “thrilled to have such committed and focused distributors on board as Freestyle and Word Entertainment. Their passion, appreciation and belief in the film, as well as the lives it will change, were major factors in choosing them as partners.”

Freestyle Digital Media, LLC was launched in November 2011 by its CEO Susan Jackson who is Co-President and founder of independent theatrical distributor Freestyle Releasing, LLC and North American sales company Turtles Crossing, LLC. Freestyle Digital Media supplies quality commercial film and TV content directly to all US VOD/SVOD rental DVD/Kiosks and theaters using the latest cloud-based technologies to automate digital workflow.  Freestyle’s goal is to provide fresh, well-marketed product and stay on the cutting edge of the ever-compressing windows to ensure that their partners benefit from a platform that delivers an anytime-anywhere capability in the medium of their choice and a positive digital viewing experience on any device in any location.