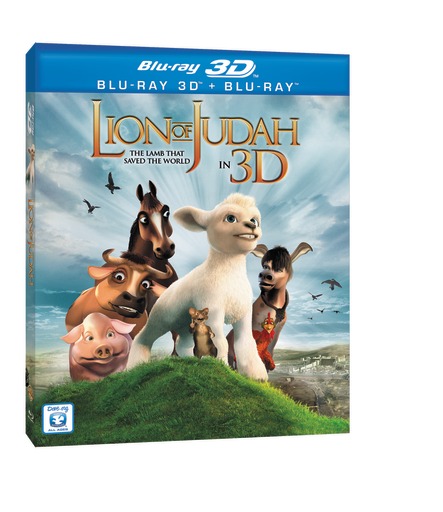 Sims composed, arranged, orchestrated and produced the 55-minute underscore and re-produced nine of the ten original songs in the movie. The composer also served as executive producer of the soundtrack CD, which is available through online retailers such as Amazon.com and iTunes.  The composer’s score has received rave reviews from Film Music Magazine, the International Film Music Critics Association, and McClatchy-owned newspapers such as The Miami Herald, The Dallas Morning News, and The Seattle Times.

“I’m thrilled that it’s being released by Warner Brothers and that it goes down in history as the first faith-based animated film to be released on Blu-ray 3D,” said Sims, who has composed music cues for Harpo Productions TV programs such as “The Oprah Winfrey Show”, “The Dr. Oz Show”, and “The Nate Berkus Show”.  “I’m hoping that the music in this film will help draw attention to Nashville as a well-rounded music city, and not just the home of country music.”

“The Lion of Judah”, which was shown in theaters across the nation last summer, was named the “Best Animated Film” at the Sabaoth International Film Festival in Milan, Italy.  It features a zany cast of stable animals that embark on an adventure to save the spunky and heroic lamb Judah from being sacrificed for Passover.  The movie features the voice talents of Academy Award-winner Ernest Borgnine, Michael Madsen, Sandi Patty, Scott Eastwood, Georgina Cordova, Omar Benson Miller, Anupam Kher, and Alphonso McAuley. The film is rated PG and recognized by the Dove Foundation with the Dove Seal for Family Friendly Entertainment.

AMG Films tapped Sims to compose the underscore for the film in January 2009. All of the composing, arranging and orchestration work was completed in his Nashville studio. Nashville engineer Kim Deardorff prepared the ProTools sessions and Doug Wayne was hired to help with song production, mixing and mastering. Doug LeBow of Los Angeles served as the leader of the music preparation team, which included Nashville musicians Dave McKay and John Hinchey. The entire score for the film, which features the City of Prague Philharmonic Orchestra, was recorded at Smecky Studios in Prague, Czech Republic.

“I consider composing the score for ‘The Lion of Judah’ as a defining moment in my career and a launching pad toward scoring more feature films,” added Sims, whose work can also be heard in an underscore CD released by Swedish record label MovieScoreMedia.

“The Lion of Judah” runs for approximately 87 minutes. To see a trailer for the Blu-ray 3D Pack, visit http://www.youtube.com/watch?v=yXHUUkGFbAw&feature=youtu.be.

Sims is the co-founder and executive producer of the online music licensing company MyMusicSource Inc. and the music management software company Reeltracs.  He has composed the music for the feature film “Tugger: The Jeep 4×4 Who Wanted to Fly”, the documentary “Oprah Winfrey’s Legends Ball”, the PGA Hall of Fame film “Magical Moments”, the Kennedy Space Center film “International Space Station LC39”, and the Universal Studios Barcelona virtual reality ride “Seafari”. The score for “Magical Moments” earned him an American Advertising Award for best musical score.  In 2011, he received the Seal of Excellence award from the Positive Music Association as the producer of Annie Sims’ latest album, “Go Within”.

The Kingsport, Tenn., native has held roles such as arranger-in-residence for the Orlando Philharmonic Orchestra, arranger for the 101 Strings Orchestra, co-founder of World Time Music (a scholastic jazz combo series distributed by the Hal Leonard Corp.), and vice president/head of production for PowerHouse Music Library Inc. He earned a bachelor’s degree in studio music and jazz from the University of Tennessee.

Sims’ next scoring projects include the documentary “Flying High” by award-winning filmmaker Peter Shockey and the romantic fantasy “Soulmates”.