Based on the Best-Selling Book Series by Beverly Lewis

Coming to Theaters for One Day Only – February 20 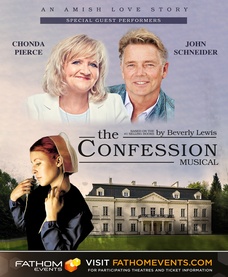 NASHVILLE, TN. January 11, 2023 – Blue Gate Musicals, UpTV Entertainment, and Fathom Events are partnering together to bring THE CONFESSION MUSICAL with special performances by Chonda Pierce and John Schneider to theaters nationwide on February 20. Based on the popular book series “The Heritage of Lancaster County” by New York Times best-selling author Beverly Lewis, the stage play boasts over 200,000 ticket sales since its premiere.  On February 20, for one-day-only,  audiences across the country can share this inspiring and entertaining story of two worlds colliding as a young Amish woman seeks to find her birth mother.

THE CONFESSION MUSICAL was adapted for the stage by Emmy-Nominated screenwriter Martha Bolton. The musical follows the story of Katie Lapp, a young Amish girl who discovers that her parents have been keeping a deep secret…that she is adopted. Katie decides to find her birth mother, defying the rules of her Amish village and risking a shunning. Meanwhile, Laura Mayfield, her wealthy birth mother who is battling an illness that might take her life, began searching for her long-lost daughter. Secretly plotting against Laura is her gold-digging husband Dylan (John Schneider). Dylan knows that if Katie is found, he will no longer inherit Laura’s fortune. With the help and prayers of her Christian housekeeper (Chonda Pierce), Laura hopes to foil Dylan’s plan and be reunited with her daughter.

Blue Gate Musicals is leading the way in creating a unique genre of musicals set in Amish Country America. Their twelve musicals intertwine the Amish and English worlds, creating intriguing dilemmas and soul-searching journeys full of laughter and captivating music. Producer Dan Posthuma, “For the past decade, Blue Gate Musicals has been committed to bringing entertaining and enriching musicals to the stage. We are now thrilled to partner with UpTV and Fathom to bring these stories to the big screen as well.”

Fathom Events and Blue Gate Musicals will host THE CONFESSION MUSICAL MOVIE in movie theaters nationwide on Monday, February 20 at 3:00 p.m. and 7:00 p.m. local time. For a complete list of theater locations, visit the Fathom Events website (theaters and participants are subject to change). Tickets are available today at FathomEvents.com and participating theater box offices.

Fathom is a recognized leader in the entertainment industry as one of the top distributors of content to movie theaters in North America. Owned by AMC Entertainment Inc. (NYSE: AMC); Cinemark Holdings, Inc. (NYSE: CNK); and Regal Cinemas, a subsidiary of the Cineworld Group (LSE: CINE.L)., Fathom operates the largest cinema distribution network, delivering a wide variety of programming and experiences to cinema audiences in all the top U.S. markets and to more than 45 countries. For more information, visit www.FathomEvents.com

Blue Gate Musicals, LLC was formed in 2010 to create relevant, meaningful, and entertaining original musicals. Founding partner Mel Riegsecker and President and Dove-Award Winning Producer Dan Posthuma oversee the operations of BGM, which includes twelve hugely successful Broadway-caliber musicals from the heart of Amish Country. BGM continues to create musicals with a central Amish character that share the beauties and challenges of the plain life, while presenting uplifting and entertaining shows for audiences of over 700,000 to date. https://www.bluegatemusicals.com/