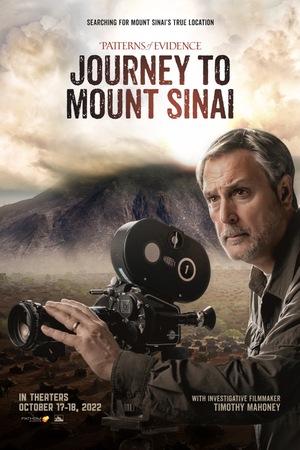 MINNEAPOLIS, MN. October 6, 2022 – Thinking Man Films has announced today an exclusive panel discussion, to be viewed immediately following the theatrical showings of PATTERNS OF EVIDENCE: JOURNEY TO MOUNT SINAI. The feature-length documentary will be in theaters two-nights only, October 17 and 18,  distributed through Fathom Events.

Patterns of Evidence has become a beloved, trusted source for those seeking to discover the credibility of the Bible. By comparing biblical accounts with science, archaeology, and historical documents, the series strives to validate important accounts from scripture that are core to biblical faith. The sixth film in the series, PATTERNS OF EVIDENCE: JOURNEY TO MOUNT SINAI, seeks to decipher the true location of Mount Sinai.

Jeff Cavins is a nationally known speaker, author, TV host, podcaster and pilgrimage leader whose engaging style of teaching has helped hundreds and thousands of Catholics grasp a better understanding of the Catholic faith and the Bible.

Mark Henry is the Lead Pastor of Revive Church in Brooklyn Park, MN and is known for calling people to do one thing: Passionately Pursue Jesus Christ. Globally he has shared the Gospel with over 6 million people, exposed over 50,000 pastors to expository preaching, and helped establish over 70 churches in Africa.

Thom Berkowitz is a Messianic Jewish believer and has spent the past 23 years as the Teaching Director for Community Bible Study in Edina MN. The former co-host of the radio show “Two Jews and a Gentile”, Thom is also the Vice President of the Board of Directors for Together for Israel, a ministry helping Jewish and Arab believers in Israel.

Filmmaker Timothy Mahoney is the visionary behind the award-winning documentary series, PATTERNS OF EVIDENCE, including films THE RED SEA MIRACLE I & II, THE MOSES CONTROVERSY, THE EXODUS, THE JOURNEY HOME, and now THE JOURNEY TO MOUNT SINAI I & II. Tim is the founder of Thinking Man Films and Media, a Minneapolis-based international documentary & publishing company.

Mahoney explains, “This panel is such a fascinating mix, and I know our audience will enjoy hearing the reactions of the Catholic, Protestant, and Messianic Jewish community on the evidence we discovered when seeking out the location of Mount Sinai. It’s an engaging and insightful conversation that should also help viewers better understand what this Journey to Mount Sinai means for each of us today and our faith. I look forward to sharing the different viewpoints from this panel”

PATTERNS OF EVIDENCE:  JOURNEY TO MOUNT SINAI is focused on searching for the true location of Mount Sinai. The film follows investigative filmmaker Timothy Mahoney pursuing physical evidence of the Exodus journey to Mount Sinai where Scripture shares that God came down to meet the Israelites. The film follows the Israelites’ path after the Red Sea crossing until their arrival at the mountain. After initially focusing on a mountain in Saudi Arabia, favored by Exodus Explorers, Mahoney is challenged to look at other options. He uses the trusted Patterns-of-Evidence approach to investigate six main candidates. Examining details in the biblical text as well as geographical and archaeological information, he sets out to pin-point the mountain’s true location. Can he find the mountain where Moses encountered the burning bush and heard the voice of God commanding him to return with the Israelites?

Tickets for the film can be purchased at www.FathomEvents.com or at participating theater box offices.  For a complete list of theater locations visit the Fathom Events website (theaters are subject to change).

Fathom is a recognized leader in the entertainment industry as one of the top distributors of content to movie theaters in North America. Owned by AMC Entertainment Inc. (NYSE: AMC); Cinemark Holdings, Inc. (NYSE: CNK); and Regal , a subsidiary of the Cineworld Group (LSE: CINE.L), Fathom operates the largest cinema distribution network, delivering a wide variety of programming and experiences to cinema audiences in all the top U.S. markets and to more than 45 countries. For more information, visit www.FathomEvents.com

Thinking Man Films is a U.S. based production company owned by Timothy P. Mahoney. The company’s first film was Patterns of Evidence: The Exodus and led to the internationally successful Patterns of Evidence film series.  We seek to produce balanced, high-quality films and media that encourage all to be thinking men and women.  www.thinkingmanfilms.com