WILL BE AVAILABLE FOR THE FIRST TIME IN 4K RESOLUTION

Own it November 8 on 4K Ultra HD and Digital 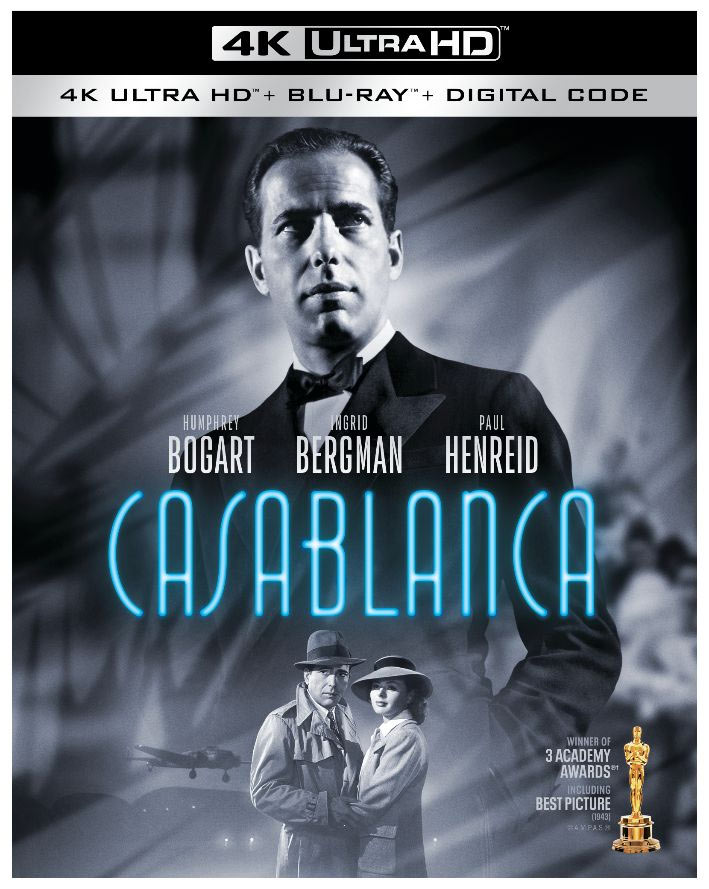 The winner of three Academy Awards® including Best Picture, Best Director and Best Adapted Screenplay, Casablanca was directed by Michael Curtiz (Captain Blood, Mildred Pierce, White Christmas) from a screenplay by Julius J. Epstein, Philip G. Epstein, and Howard Koch. The screenplay is based on “Everybody Comes to Rick’s”, an unproduced stage play by Murray Burnett and Joan Alison.  The film was produced by Hal B. Wallis (The Adventures of Robin Hood, The Maltese Falcon, True Grit).

In 1989, the United States Library of Congress selected the film as one of the first for preservation in the National Film Registry for being “culturally, historically, or aesthetically significant.”

The new Casablanca 4K Ultra High-Definition image was restored and remastered from a 2022 4K 16bit film scan of the best-surviving nitrate film elements. The 4K-scanned digital images went through an extensive digital restoration process to clean and repair the picture for an unprecedented and pristine ultra-high-resolution presentation.  The restored images were then graded in High Dynamic Range for today’s premium 4K display experience, providing the highest fidelity in image contrast and detail retention.  This work was meticulously handled by Warner Bros. Motion Picture Imaging.  The original theatrical mono audio has also been newly restored as well, providing a richer and broader frequency response than previously possible.

Casablanca will be available on Ultra HD Blu-ray Combo Pack for $24.99 ERP and includes an Ultra HD Blu-ray disc with the feature film in 4K with HDR and a Digital download of the film. Fans can also own Casablanca in 4K Ultra HD via purchase from select digital retailers beginning on 11/8/22.

Casablanca: easy to enter, but much harder to leave, especially if you’re wanted by the Nazis. Such a man is Resistance leader Victor Laszlo (Paul Henreid), whose only hope is Rick Blaine (Humphrey Bogart), a cynical American who sticks his neck out for no one – especially Victor’s wife Ilsa (Ingrid Bergman), the ex-lover who broke his heart. Ilsa offers herself in exchange for Laszlo’s transport out of the country and bitter Rick must decide what counts more – personal happiness or countless lives hanging in the balance.