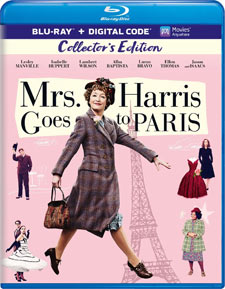 A widowed cleaning lady in 1950s London falls madly in love with a couture Dior dress, and decides that she must have one of her own. (from IMDB)

Sometimes those little-known movies that mostly fly under the radar end up being sweet surprises. Last year, Wild Mountain Thyme was one of those such movies, and earlier this year it was Marcel the Shell with Shoes On. But another surprise this year is Mrs. Harris Goes to Paris, a movie based on the 1958 book by Paul Gallico. This story simply revolves around a cleaning woman in London in 1957 who finds out that her missing husband died in the war some years earlier, and is feeling a little lost in her empty day-to-day routine. But when she sees the lady of the house’s beautiful couture Dior dress, it becomes her mission to own one for herself.

Admittedly, the premise isn’t one that would get me into a theater seat, and the posters I’d pass at the theater didn’t stop me to examine them. But when it came time to review the movie on home video, there was something about the apparent sweet nature of Mrs. Harris Goes to Paris that had me open to checking it out. And I’m glad I did. As a fan of classic movies, often set in the 50’s period this movie is set in, there’s a classic movie charm about this story. Lesley Manville plays the titular Mrs. Ada Harris, a sweet and kind cleaning woman who really doesn’t expect much in life, and is quick to devote her time and efforts to those she serves rather than herself. She’s a selfless heroine with a challenging life of whom we quickly want to see win one for a change. 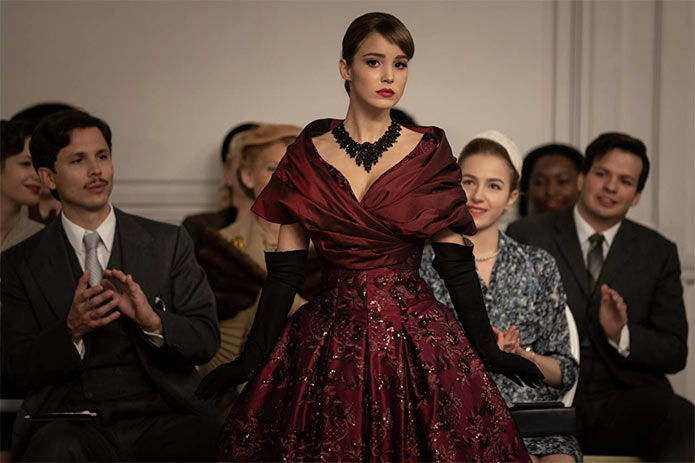 From the start, the family she works for barely pays Mrs. Harris any mind, and her blue collar work is often looked down upon. But Ada excels at her job, and she takes pride in her work. Manville plays her with such an earnest sweetness that it’s easy to get behind her character all the way. So when she falls in love with a couture Dior dress — which seems petty on paper — you want her to get that trip to Paris to visit the House of Dior to find the dress of her dreams. (It’s like the original “Treat yo’ self!”) Of course, financial roadblocks present themselves, but the story doesn’t drag this out too much, allowing Ada to get to Paris before too long — where she discovers the class prejudices of her profession creates a new series of obstacles for her. During her journey, she meets the beautiful young model with greater aspirations, Natasha (played by Alba Baptista), the young House of Dior clerk, André (played by Lucas Bravo), whose big ideas could improve his workplace, and an older gentleman named Marquis de Chassagne (played by Lambert Wilson), who seems to be a little smitten with Harris. When all is said and done, we see how Mrs. Harris’ presence in Paris shakes up the House of Dior and the lives of the people there, while also greatly impacting her own. 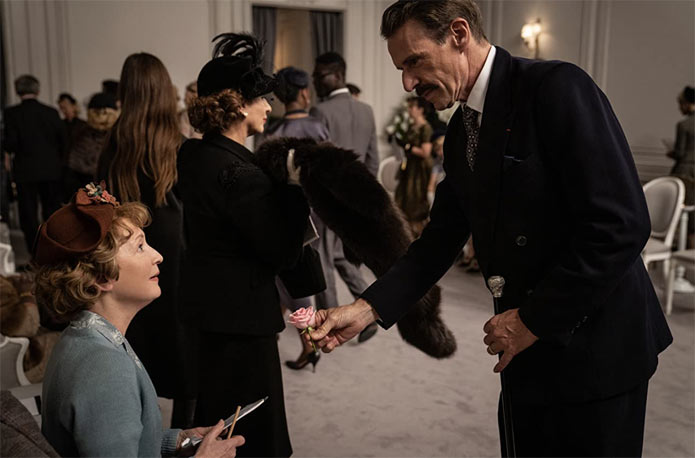 The content for Mrs. Harris Goes to Paris, is probably just barely PG (and a little closer to PG-13). I say this because the fashion-focused story often shows beautiful women in undergarments at the House of Dior, although it isn’t very gratuitous. However, a cabaret scene is more so, when a seemingly innocent stage dance involving men dressed as wolves and women dressed as Bo Peeps devolves into a far more sexual show when they strip off their outer clothes to reveal small corset outfits and tassels dangling from their bras. It’s not super raunchy, but it’s somewhat shocking given the otherwise sweet nature of the movie, and with its PG rating, I’m sure many parents would assume the movie is pretty tame enough for the young ones. I could see plenty of parents not really wanting their kids to be exposed to a sensual cabaret show. There’s also a brief suggestive scene where Mrs. Harris keeps seeing her male neighbor walking down the stairs with different pretty young women he introduces as nieces. But we realize by the second time he does this that he’s actually having affairs with these women. Otherwise, there’s a little language sprinkled in, mostly blasphemy sadly, with a use of “Chr-st,” and about 7 uses of God’s name in different forms of exclamation, and a single use of “*rse” and “t*ts” (as “t*ts up”). Otherwise, the movie has an old film feel that we don’t see too much in newer movies anymore.

Mrs. Harris Goes to Paris is available on Blu-Ray, DVD, and Digital. The Blu-Ray disc and digital copies have just a couple extras, but not much unfortunately.

Gag Reel (5:16) – The 5-minute gag reel is cute and is mostly just the cast laughing or messing up their lines.

Deleted and Extended Scenes (4:27) – There are three deleted scenes totalling 4-and-a-half minutes of footage. Unfortunately, none of them are really all that interesting. “Ada Rushes Towards the Metro” (0:25) shows Ada running towards the Metro and finding protesters blocking her way. (1 “bloody h*ll”) “Ada Wants to Speak to Andre” (0:25) shows her peeking into Andre’s study to find he’s on the phone, and so she sneaks back out. I’m not sure when in the movie this was supposed to fit, but it seems especially unnecessary viewed out of context. Lastly, “Full Cabaret” (3:37) is apparently an uncut version of the sensual performance we see in the film. Women dressed as Little Bo Peeps remove their dresses and dance with men dressed as wolves in sheep’s clothing. We see them in corsets and bras with tassels on them. The scene ends with a dreamy montage of Ada drinking heavily and dancing dizzily.

Sex/Nudity: Pamela wakes up and we briefly see her in a top that shows a great deal of cleavage; Harris passes a man on the stairs who introduces a young girl as his niece. We see him again later with another young girl he introduces as another niece and we realize he’s having multiple affairs; We see lots of women in a dressing room showing various degrees of cleavage; We see a fashion show with young women in dresses showing varying degrees of cleavage; A cabaret scene first appears to be an innocent stage dance involving men dressed as wolves and women dressed as Bo Peeps but then devolves into a far more sexual show when they strip off their outer clothes to reveal small corset outfits and tassels dangling from their bras; We see Mrs. Harris in her slip during a dress fitting; We see a woman in a corset in a sewing room; A phrase uses the terminology “t*ts up.”

Violence: A woman runs towards a red carpet in front of the House of Dior and falls hard on the ropes and hits the ground; Natasha and Andre accidentally hit heads when they bend over at the same time; We see a taxi driving recklessly through the streets of Paris; A dress catches on fire and a man throws a bucket of ice on it to put it out; A woman repeatedly hits her fists on a police officer’s shoulders.