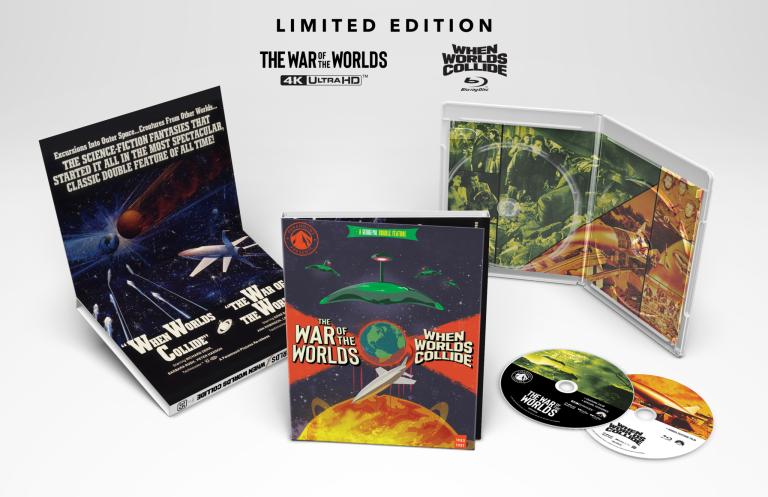 THE WAR OF THE WORLDS and WHEN WORLDS COLLIDE arrive on September 27, 2022 as a double feature in the collectible Paramount Presents line!

Enjoy two of the most iconic science fiction epics in one limited-edition package: THE WAR OF THE WORLDS makes its 4K Ultra HD debut and is accompanied by WHEN WORLDS COLLIDE for the first time on Blu-ray™.

The 1953 adaptation of H.G. Wells’ acclaimed novel, THE WAR OF THE WORLDS was nominated for three Academy Awards® and won for Best Special Effects.  Experience the genre-defining Technicolor classic fully remastered in eye-popping 4K Ultra HD for the first time.  The disc also includes access to a digital copy of the film, the infamous 1938 radio broadcast of War of the Worlds narrated by Orson Welles, and more.  Bonus content is detailed below:

1951’s WHEN WORLDS COLLIDE was nominated for two Academy Awards and won for Best Special Effects.  Both this film and THE WAR OF THE WORLDS were produced by George Pal, a Hungarian-American animator, director, and producer who was a leading figure in sci-fi filmmaking.  Experience this thrilling classic remastered from the original film elements and on Blu-ray for the first time ever.  The disc includes access to a digital copy of the film, as well as the theatrical trailer.