THE TOP-GROSSING HOLLYWOOD FILM OF THE PANDEMIC ERA
AT THE INTERNATIONAL BOX OFFICE IS YOURS TO OWNBRING BOND HOME FOR THE HOLIDAYS AND EXPERIENCE
NEVER-BEFORE-SEEN BONUS CONTENTOWN IT ON 4K ULTRA HD, BLU-RAYTM AND DVD COLLECTOR’S EDITIONS DECEMBER 21, 2021 FROM EON PRODUCTIONS, METRO GOLDWYN MAYER (MGM)
& UNIVERSAL PICTURES HOME ENTERTAINMENT 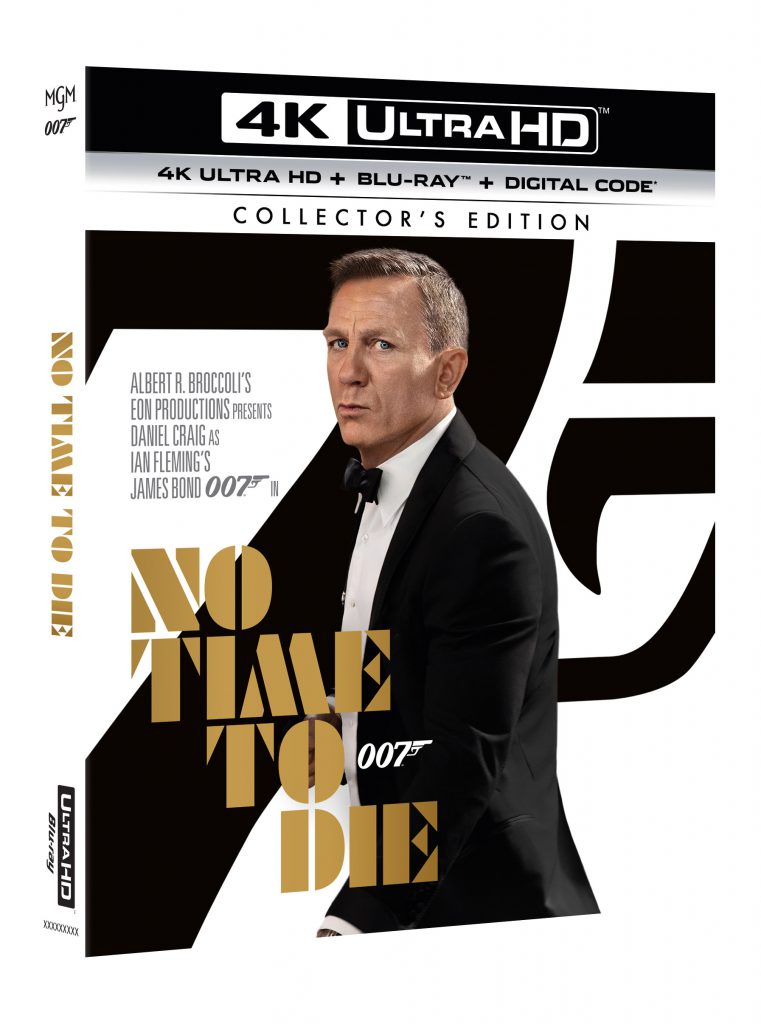 Universal City, California, November 16, 2021 – Daniel Craig delivers the “best Bond we’ve ever had” (IGN) and a “stunning and surprising finale” (Empire) in NO TIME TO DIE, the extraordinary 25th installment of the James Bond series, available to own for the first time on 4K Ultra HD, Blu-ray™ and DVD Collector’s Editions on December 21, 2021 from Albert R. Broccoli’s EON Productions, Metro Goldwyn Mayer (MGM) and Universal Pictures Home Entertainment. Generating more than $700 million worldwide and Certified Fresh on Rotten Tomatoes, fans can now bring home NO TIME TO DIE in time for the holidays with more than an hour of bonus content exploring the action, spectacle and stunts. With highlights including the Being James Bond 45-minute retrospective on 4K Ultra HD and four exclusive and exciting featurettes, viewers can go behind-the-scenes of the film and deeper into the “thrilling and emotional” (Deadline) legacy of Daniel Craig’s 007.

NO TIME TO DIE returns Daniel Craig as Ian Fleming’s James Bond alongside OSCAR® winner Rami Malek. Bond has left active service and is enjoying a tranquil life in Jamaica. His peace is short-lived when his old friend Felix Leiter from the CIA turns up asking for help. The mission to rescue a kidnapped scientist turns out to be far more treacherous than expected, leading Bond onto the trail of a mysterious villain armed with dangerous new technology.

NO TIME TO DIE will be available on 4K UHD, Blu-ray™ and DVD.