SCENES OF THE CRUCIFIXION, DEEMED TOO VIOLENT BY MPAA IN UPCOMING FILM

R RATING BRINGS QUESTIONS, AS DETERMINED BY THE COMBINATION OF ACTUAL MOB SCENES &

FRANZESE SAYS ALL OVER THE AGE OF 13 SHOULD BE ABLE TO SEE THIS FILM, SET TO RELEASE ON OCTOBER 31 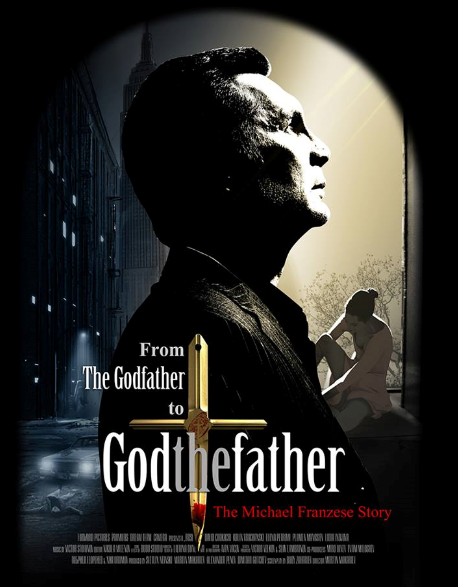 (Los Angeles, Calif.) –October 17, 2014 – The upcoming release God the Father, slated for release on October 31, the day Michael Franzese, once dubbed the Prince of the Mafia, became a “made man,” vividly depicts both Franzese’s life as a Mob kingpin and as a man transformed by faith.  The film does not shy away from illustrating the real world and life that Franzese swore allegiance to.  But it is a scene of Christ’s Crucifixion shown as part of his prison epiphany and the Mob stock footage scenes combined, that tipped the scales at the MPAA who gave the film an R rating.

The irony is not lost on Franzese: “I spent over 20 years on the street, every day in violation of both God’s laws and the laws of man.  And the powers that be have a problem not only with Mob reality being seen, but also with Biblical history?  You see worse images and stories on the 6 o’clock news! The entertainment business can’t afford to be out of touch with real world problems our youth are experiencing, from gangs to drugs and violence.  Anyone over 13 needs the opportunity to see this film.”

Franzese made over a billion dollars for his crime “family,” earning more than anyone since Al Capone.  It was enough to place him at #18 (3 behind John Gotti) on Fortune Magazine’s “Fifty Most Wealthy and Powerful Mafia Bosses.”  He was a Hollywood producer, a restaurateur, a night club owner:  He was living the life of a man’s man as he saw it.  A revelation that his own father went along with planning a hit on him, the love for his own family, and a realization that his life was heading like every other Mob guy before him straight to St. Johns Cemetery in Queens, New York, that made Franzese decide to leave “The Life.”  In an act thought impossible, he publicly walked away from the Colombo family and organized crime.

“Its real world stuff (the Mob scene footage) that is around us all the time,” says Franzese.  “It’s not the gratuitous violence most movies include for the audience reaction, but real life, real crime and real people.  All ages need to see this, but especially our young people who are confronted every day with opportunities to go down the wrong path… This film was created from my reality, for all to see a life outside of the Mob, a way out… but you have to see the reality of it to understand the impact of the redemption that can occur, as what happened in my own life.”

Franzese adds: “In making God The Father, we went to great lengths to show the dark aspect of my real life story in a subtle and intelligent way.  The story of Jesus’s suffering and Crucifixion is very well known and in the past, audiences have been willing to endure the intensity of those scenes.   What is important to me is to share the parallel themes that I discovered in the story of the Crucifixion and my own experiences in “The Life”: themes such as perseverance, forgiveness, redemption and faith.   I hope that this film will allow everyone to see beyond the short-term and see that there are choices to lead a positive fulfilling life for themselves and those around them.”

God The Father takes audiences on the untold personal journey into the life and spiritual transformation of Michael Franzese, a young and charismatic Capo in the Colombo crime family during the 1980’s-90’s, who’s notorious father Sonny Franzese was also a renowned Underboss. It’s a true story about mafia, money, love, loyalty and God.

GOD THE FATHER opens on Friday, October 31 across the country in select theatres.  It is rated “R” for violent images by the MPAA and has a running time of 101 minutes.

For the latest news, updates and a list of opening cities for God The Father, please visit:

Following in his father’s footsteps, in the mid-1980s, Fortune Magazine listed Franzese as number 18 on its list of the “Fifty Most Wealthy and Powerful Mafia Bosses.” According to a Federal report, Franzese made more money for a crime family than anyone since Chicago Outfit boss Al Capone. A revelation that his own father went along with the hit on him, the love for his family and a realizing his life was heading one way like every other Mob guy before him, straight to St. Johns Cemetery in Queens, New York, Franzese took the decision to leave the ‘Life.’ An act thought impossible, he publicly walked away from the Colombo family and organized crime.

Today, Franzese speaks to audiences across the country about his past and transformation through a Christian ministry called Outreach and works diligently to re-direct the lives of at-risk-youth through his charitable organization, Michael Franzese Ministries.  Franzese has also authored several books about his life, including “Quitting the Mob,” “Blood Covenant,” “I’ll Make You an Offer You Can’t Refuse,” and “The Good, the Bad, and the Forgiven.”