AT TOP OF BOX OFFICE THROUGHOUT OPENING WEEK 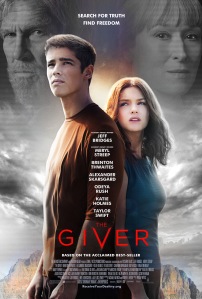 LOS ANGELES, Calif. (August 22, 2014) – The Giver, based on the beloved 1993 novel by Lois Lowry, opened in the top five at the box-office this past weekend has made a strong impression on faith & family moviegoers nationwide and is on track to continue entertaining audiences for weeks to come. Referred to as “the best Christian movie since Narnia” (David French, Patheos), The Giver made its strong Hollywood debut holding in the Top 5, in a crowded weekend of big budget major motion picture releases including Teenage Mutant Ninja Turtles, Guardians of the Galaxy, Let’s Be Cops and The Expendables 3.

Walden Media, a company committed to provide quality entertainment, released the film with partner The Weinstein Co. The Giver joins their roster of modern family classics such as The Chronicles of Narnia franchise, Amazing Grace, Because of Winn Dixie, and Bridge to Terabithia, which have all made a solid impact on the entertainment community, while The Giver proves to be leading the pack in an even more solid manner.

“I soon realized that the most important things could not be seen.  Faith, the Giver called it.

He said it was like the wind.  It was real and it was all around us, but we just couldn’t see it.”

Walden President and Co-Founder Micheal Flaherty stated, “We are fortunate to have been able to shepherd The Giver to fruition alongside our friends at The Weinstein Company.  Competing with such big-budget films and holding our own is a testament to the power of Lois Lowry’s beloved book and the beautiful adaptation director Phillip Noyce brought to the big screen.  The faith community has turned out in droves and overwhelmingly supported the film from the very beginning.  We want to thank you for the support and positive words of praise.  We hope that those watching this weekend will be equally thrilled.”

The story portrays a tightly controlled society of the future that runs on “Sameness,” where memories and strong emotions are discouraged, conscience is virtually unknown, and defective infants, the elderly and dissenters are methodically sent to “Elsewhere” — in other words, killed. One young man, chosen by the community to train as its “Receiver of Memories,” is repelled by the secrets at the heart of the utopia. He sets in motion an awakening the human spirit.

For more information about The Giver, please visit www.thegiverfilm.com.

What people are saying about The Giver:

“Go see The Giver because it’s a good movie, but also see it because it will remind you of the “life in full,” the life that Moses tells us to choose and the life that Christ promises to provide…  a life that can only be truly lived through and by faith.”

“This is a wonderful film. Nothing in the movie version of The Giver will offend a family. Just the opposite. It’s an intelligent, absorbing, beautifully crafted film everyone should see.”
– Archbishop Charles J. Chaput, O.F.M. Cap.

“Run, don’t walk to The Giver, triumph of love and compassion over a heartless regime of mind-control.”

“The Giver is a challenging film, to be sure. It deals with life, liberty, free will … and euthanasia, after all. But it never once wavers in its responsibility to escort moviegoers onto solid moral ground, to give them loads of positive material to think about and talk through afterwards.”

“Like The Fault in Our Stars earlier this summer, young people have once again been given their generation’s version of a message that, although not necessarily new, nevertheless may feel urgent and uniquely timely to its core audience.”

“Rarely does a movie touch me like this one did – The Giver is unique, entertaining and deeply thought-provoking.  Powerfully acted and beautifully filmed, people of all generations should see it.”

“The Giver is a story that should challenge both liberals and conservatives, in fact anyone who wishes to silence different voices, whether they be on the left or the right. Since our world is engaged in doing just that—silencing anyone who does not hold the ‘right’ views–it is chilling to see a version of how that might work itself out if we do not recover our commitment to freedom of speech and belief.”

Walden Media creates entertainment for the whole family through successful movies, award-winning books, and acclaimed television programs. A Walden Media production celebrates a great book well told, a great life well lived, or an exploration that expands present possibilities – all while inspiring and entertaining its audience. Past award-winning films include: “The Chronicles of Narnia” series, the “Journey to the Center of the Earth” series, “Nim’s Island,” “Charlotte’s Web,” “Bridge to Terabithia,” “Holes,” “Amazing Grace,” and the Sundance Audience Prize Winning documentary “Waiting for ‘Superman.”

About The Weinstein Company:

The Weinstein Company (TWC) is a multimedia production and distribution company launched in October 2005 by Bob and Harvey Weinstein, the brothers who founded Miramax Films in 1979. TWC also encompasses Dimension Films, the genre label founded in 1993 by Bob Weinstein, which has released such popular franchises as SCREAM, SPY KIDS and SCARY MOVIE. Together TWC and Dimension Films have released a broad range of mainstream, genre and specialty films that have been commercial and critical successes. During Harvey and Bob’s tenure at Miramax and TWC, they have received 348 Oscar nominations and won 82 Academy Awards.