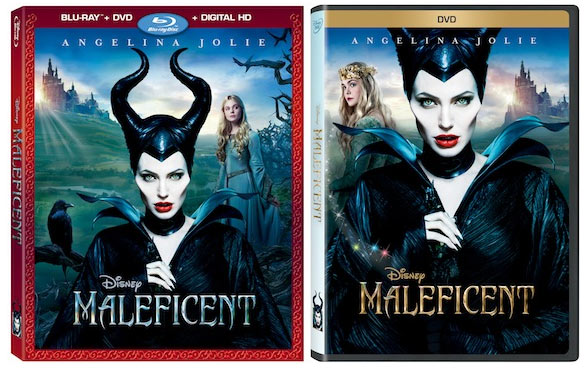 After enchanting audiences around the world and grossing more than $700 million in worldwide box office, this live-action, fantasy adventure casts a wondrous new spell on Blu-ray and Digital HD, featuring stunning high definition picture and sound, plus spellbinding, all-new bonus features, including several deleted scenes and behind-the-scenes featurettes that take viewers deeper behind the scenes of the filmmaking magic.

Join the cast and crew as they explore how Disney’s animated classic “Sleeping Beauty” was re-imagined as an innovative, live-action epic in “From Fairy Tale to Feature Film.”   Discover how King Henry and Maleficent’s opening battle scene was created using gigantic wire rigs and elaborate choreography in “Building an Epic Battle.”  Learn how playing Aurora was a fairytale come true for actress Elle Fanning in “Aurora: Becoming A Beauty.” And find out more about the meticulous detail that went into creating Maleficent’s elaborate head wraps, rings and other accessories in “Classic Couture.”  Viewers can also relive the film’s journey to the screen through concept art, layered visual effects and behind the scenes footage in “Maleficent Revealed.”

English Captions for the Deaf and Hearing Impaired

Stay connected with the latest news and information about Disney’s “Maleficent”:

Explore the untold story of Disney’s most iconic villain in this wickedly fun twist on the classic “Sleeping Beauty.” In an unforgiving mood after a neighboring kingdom threatens her forest, Maleficent (Angelina Jolie) places an irrevocable curse on the king’s newborn daughter, the Princess Aurora. But as the child grows, Maleficent finds herself becoming fond of the girl. And as the conflict between the two realms intensifies, Maleficent realizes that Aurora may hold the key to peace in the land. Journey beyond the fairy tale in this soaring adventure that is “visually arresting, brilliantly designed” (Andrew Barker, Variety).

Disney Movies Anywhere (DMA) is a cloud-based digital movie service that offers a hassle-free way for consumers to buy, watch, and manage Disney digital content across platforms and devices via the easy-to-use DMA app or atDisneyMoviesAnywhere.com. A DMA-eligible digital title purchased from an iTunes-connected account or redeemed in DMA will be accessible in a user’s DMA and iTunes lockers. There are currently over 400 films from Disney’s rich history available through DMA for streaming and download, including Disney Branded Animation, Disney Live-Action, Pixar, and Marvel titles, along with exclusive, original content. For more information or to redeem Digital Copy codes to build your library and earn Disney Movie Rewards Points for digital purchases, visit http://www.disneymoviesanywhere.com.

For 90 years, The Walt Disney Studios has been the foundation on which The Walt Disney Company was built. Today, the Studio brings quality movies, music and stage plays to consumers throughout the world. Feature films are released under the following banners: Disney, including Walt Disney Animation Studios and Pixar Animation Studios; Disneynature; Marvel Studios; Lucasfilm; and Touchstone Pictures, the banner under which live-action films from DreamWorks Studios are distributed. The Disney Music Group encompasses the Walt Disney Records and Hollywood Records labels, as well as Disney Music Publishing. The Disney Theatrical Group produces and licenses live events, including Disney on Broadway, Disney On Ice and Disney Live!