Twenty-six films are either scheduled or will be scheduled over the next 15+ months; some being wide releases, but most being limited runs.  “The mainstream movie industry has a system that keeps blockbusters from running into each other on the same weekend and we believe if the faith film genre is to grow, we need to open up the conversation in a way that gives each of our movies time to find their audience,” said co-founder and host of the Faith In Film Breakfast Club Barry Landis, partner in Working Title Agency.

“Never before have we seen so many faith-based films take a shot at the big screen over a 15+ month window,” said Rich Peluso, Vice President of AFFIRM Films/Sony Pictures Entertainment and co-founder of the group.  “It will be very interesting to see how audiences respond, and I think everyone in this space will be able to gain insight and direction for the future on what works and what doesn’t.”

Faith-based films are growing.  In addition to the independent releases, major players such as Sony, Warner Bros., Fox, Paramount, Lionsgate and Film District are in the game.  “We seem to be at a time when more money and more energy are pouring into the faith-friendly and faith-based film world than ever before”, said Ben Howard, Sr Vice President of Provident Films and co-founder of the group.   “The release schedule is full, and there are more and more films going into production. The months ahead look very exciting.”

The Nashville FIF Breakfast Club was organized four years ago in an effort to help network and educate its members on the film industry best practices.  The FIF generally meets at the Provident Films corporate offices in Cool Springs, but on September 24 the group is hosting a special session at Lipscomb University in Nashville with guest speaker Chad Connelly, National Director of Faith Engagement for the Republican National Committee. 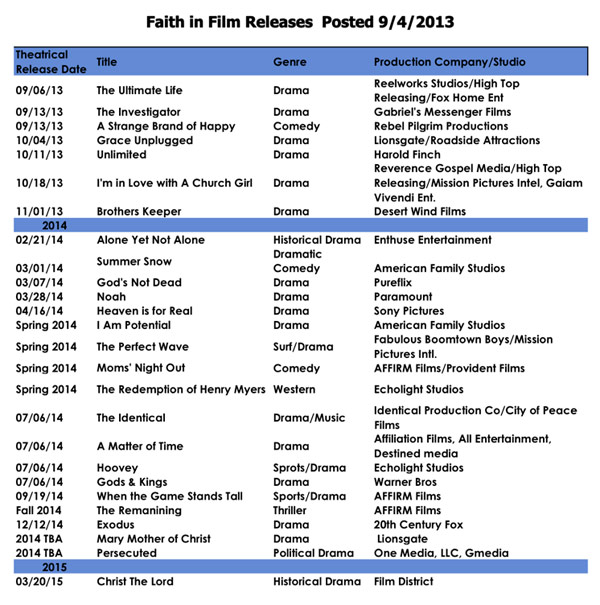