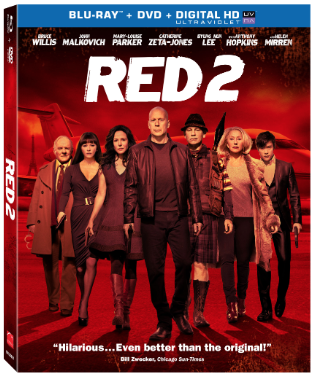 The high-octane follow-up to the worldwide hit, Red 2 arrives on Blu-ray Combo Pack (plus DVD and Digital HD UltraViolet), DVD (plus Digital Ultraviolet), Video On Demand and Pay-Per-View on November 26 from Summit Entertainment, a LIONSGATE Company. The film will be available on Digital HD two weeks early on November 12. Bruce Willis (The Expendables) stars as retired black-ops CIA agent Frank Moses, who must reunite his unlikely team of elite operatives to take on a new set of enemies on a mission that is “smart, sexy and packs a wallop!”(AM New York). Featuring an outstanding all-star cast including John Malkovich (Burn After Reading), Mary-Louise Parker (Showtime’s “Weeds”), with Anthony Hopkins (Thor) and Helen Mirren (The Queen), Red 2 proves the best never rest.

Retired black-ops CIA agent Frank Moses (Willis) and his team set out on a global quest to track down a missing, next-generation lethal device that can change the balance of world power. To succeed, they’ll need to survive an army of relentless assassins, ruthless terrorists and power-crazed government officials, all eager to get their hands on the technologically advanced super weapon. Outgunned and outmanned, they have only their cunning wits, old-school skills and each other to rely on as they try to save the world – and stay alive in the process.

The Red 2 Blu-ray Disc and DVD bonus materials include “The Red 2 Experience,” an in-depth look at the film’s characters, weapons, spy gadgets and stunts, as well as deleted scenes and a gag reel and will be available for the suggested retail price of $39.99 and $29.95, respectively.

Rating: PG-13 for pervasive action and violence including frenetic gunplay, and for some language and drug material