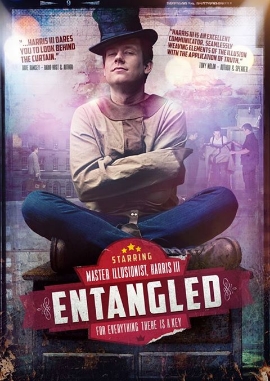 View the trailer at http://www.HarrisIII.com

(Shippensburg, PA) — Destiny Image Films is pleased to announce its partnership with Lucid Artist Management and “master of misdirection,” Harris III, for the world-wide release of the upcoming feature film, “Entangled,” and a subsidiary product line.

The film, which will be released in November 2013, takes the audience through an innovative blend of narrative film and Harris’ “live” show experience. Classically trained master illusionist, Harris III, spent the majority of his young life dazzling audiences. His performances have been featured on thousands of stages throughout the United States, and his magic-with-a-message has captured the spotlight in over 15 countries on five continents.

In this highly anticipated project, Harris III takes you on a journey filled with wonder, inspiration and life-changing truth. This master communicator has created a never-before-seen style of illusion that is unmatched and uniquely his own.

A product line based on the film will follow the film’s release in spring 2014. This will include books, curriculum, teaching DVDs and more.

Destiny Image Films, a division of Nori Media Group, endeavors to tell inspirational stories that will touch and change lives. We partner with filmmakers to produce top quality feature films. We then package the films for the world-wide market, distributing to mainstream retail outlets, mass merchants, independent video and bookstores, domestic and international broadcasting markets, video-on-demand, streaming and rental markets.

Harris III is an award-winning master illusionist who has spent more than a decade communicating life-changing truths about the tricks and deceptions played on people. He has earned respect as an artist, but to many, he is an equally respected communicator. Whether telling a story, speaking candidly from his heart, or performing magic, his ultimate goal is to inspire and challenge people, initiating change and transformation. For more information about Harris III, visit his website: http://www.HarrisIII.com