This Comedic Treasure is the Directorial Debut of Adam Lubanski, Interactive Graphics Designer for “The Amazing Spider-Man,” “Charlie’s Angels,” 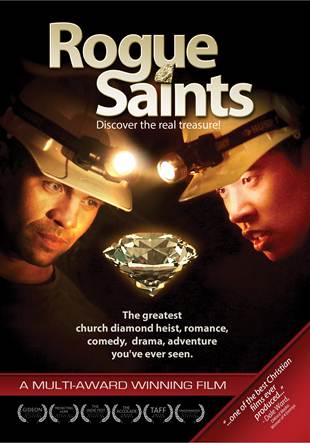 Nashville, TN – (November 12, 2012) – On Sunday, November 11, “Rogue Saints,” the fourth release from Word Films, was presented with the highest honor at the San Diego Christian Film Festival, “Best US Narrative Feature.” The multi-award winning inspirational comedy was released October 16 on DVD and is the directorial debut of revered interactive graphics designer Adam Lubanski. “Rogue Saints” is a roller coaster of drama, comedy, adventure and romance that ultimately leads to the discovery of a whole different kind of treasure.

The San Diego Christian Film Festival, held this past weekend, salutes the best in faith-based and independent films. “We are deeply honored to have been chosen ‘Best U.S. Narrative Feature’ from a field of over 100 great Christian films at the prestigious San Diego Christian Film Festival! “ said Lubanski. “All our thanks to the dedicated team in San Diego that made the festival a success. And to the 600+ cast and crew back in the Seattle area that made ‘Rogue Saints’ a success! And of course to Him who does exceedingly abundantly above all that we ask or think!!!” The purpose of the San Diego Christian Film Festival is to change the face of film with better stories, exceptional productions, and family-friendly movies the entire world can watch.  Whether it’s a comedy, drama, or action film, the types of projects showcased are centered on strong character-driven stories with a powerful and lasting message.

“Rogue Saints” is the story of what ensues when Nick and Dylan, two men down on their luck, set out to steal an enormous diamond hidden in the basement of a church.  In an attempt to disguise their endeavor, they volunteer at the church, but something about the church and its members begins to affect them. As the duo bumbles their way through their plans, Nick and Dylan learn the people they are trying to deceive are actually what they both need – quirky and imperfect, but also loving and lovable – the family they’ve been missing.

“Rogue Saints” won the Taff Family Award at the 2012 Attic Film Fest which recognizes the best in Christian Independent Films. It is also an Official Selection at Gideon Film Festival, Projecting Hope, The Indie Fest and Kingdom Wood.

This 103-minute feature film is available for purchase both online and at physical retailers. For a listing of the retailers and to view the trailer, please visit www.roguesaintsmovie.com.