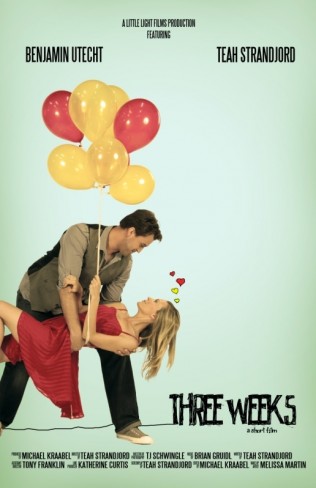 (New York, NY – October 9, 2012) – NFL football star, Benjamin Utecht has been working hard at his music career since his NFL Championship career came to an end. The athlete and musician has also adding acting to his list making him quite the unique triple threat.Utecht landed the featured role in the short film Three Weeks, a whimsical story inspired by a few hard-to-believe real-life events entailing wild sacrifices, odd part-time jobs, unbridled passion, unmatched creativity, and LOVE.  Directed by Teah Strandjord, the film will be premiering on October 15th at 9:15PM at the Twins Cities Film Festival. Check out the trailer here: http://vimeo.com/m/47693562

Teah Strandjord also stars in the film alongside Utecht who plays a musician who must make sacrifices in order to continue doing what he loves to do – and the former athlete could not be in better hands.  In 2011, Strandjord produced and acted in a short film that won “best film” at the Minneapolis 48 Hour Film Festival (RESPECT).  It then screened at the South Dakota Film Festival, and played well at the Taos Shortz Film Festival.  The inspiring film is also Teah Strandjord’s directorial debut and backed by Executive Producer Michael Kraabel.

Utecht first entered the spotlight after winning Super Bowl XLI with the Indianapolis Colts in 2006.  He later signed with the Cincinatti Bengals in 2008 where he suffered his fifth and most serious concussion.  After being forced to leave the football field, Utecht turned to his first love of music – releasing a debut Christmas album, Christmas Hope, and touring with multi-platinum recording artist Jim Brickman at the end of 2011.  Never one to remain idle for long, he will release a brand new 3-song EP titled Collide for eager fans at the end of August.

For more information on the Film Festival and to catch a chance to see the short film on October 15th, visit: http://www.twincitiesfilmfest.org/festival_info.php

For a behind the scenes look at Three Weeks, check out:  https://www.youtube.com/watch?feature=player_embedded&v=VaK115zXuSA