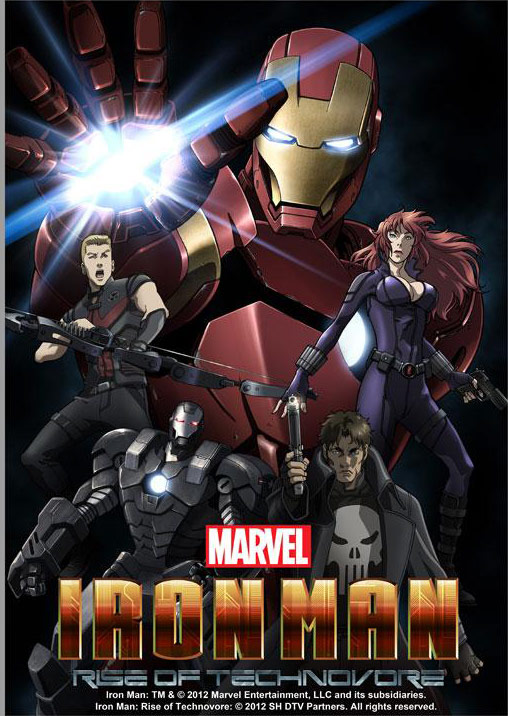 LOS ANGELES (October 8, 2012) – Marvel Entertainment and Sony Pictures Entertainment Japan (SPEJ) announced today the return of iconic Super Hero, Iron Man, to the beloved world of anime in an all-new feature-length film, IRON MAN: RISE OF TECHNOVORE.  Produced by Madhouse and currently in production in Japan, the film is slated for release on DVD in the spring of 2013.

Directed by Hiroshi Hamasaki (Shigurui, TEXHNOLYZE) with story by Brandon Auman                         (The Avengers: Earth’s Mightiest Heroes, Iron Man: Armored Adventures), the film explores a confrontation between Iron Man and the villainous Ezekiel Stane, who develops new bio-technology that seemingly outclasses the Iron Man armor.  After Stane unleashes a terrorist attack and sets Tony up to take the fall, Iron Man must evade S.H.I.E.L.D.’s man hunt and find a way to clear his name.

“Marvel is excited to present an all-new Iron Man adventure featuring the high-tech adrenaline he is known for, in the beautifully rendered anime style of our friends at Madhouse,” said Producer Megan Thomas Bradner. “We’ll get to see familiar Marvel Super Heroes such as War Machine, Nick Fury, Black Widow, Hawkeye and The Punisher, rendered in anime style for the first time. It’s a can’t miss for any Marvel fan.”

Marvel Entertainment, LLC, a wholly-owned subsidiary of The Walt Disney Company, is one of the world’s most prominent character-based entertainment companies, built on a proven library of over 8,000 characters featured in a variety of media over seventy years. Marvel utilizes its character franchises in entertainment, licensing and publishing.  For more information visit http://www.marvel.com/