Coming to Blu-ray™ and DVD with UltraViolet™ November 30th 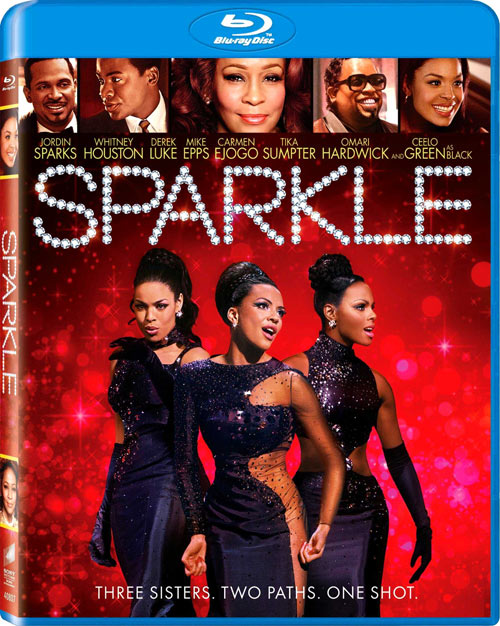 on Blu-ray™ and DVD, both with UltraViolet™, Friday, November 30th from Sony Pictures Home Entertainment. The all-star cast also includes Carmen Ejogo (Away We Go), Tika Sumpter (Think Like a Man), Derek Luke (Captain America: The First Avenger), Mike Epps (Jumping the Broom), Omari Hardwick (The Runner) and singer CeeLo Green in the inspiring story of an aspiring singer/songwriter (Sparks) who defies her overprotective mother (Houston) to form a musical trio with her sisters, only to encounter the temptations of success.

Bonus materials on the DVD and Blu-ray include two featurettes. “A Tribute to Whitney Houston” features Harvey Mason Jr. along with filmmakers, screenwriters, and cast paying tribute to Houston. “A Dream

Come True” features the filmmakers discussing the arduous, but triumphant journey of bringing SPARKLE to the big screen. Both the Blu-ray and DVD also come with commentary with director Salim Akil.

In addition to the featurettes on the DVD, the Blu-ray also includes “A Sparkling Performance” in which Sparks, Ejogo and Sumpter discuss the singing, dancing and glamorous costumes from the film. “Sparkle

and Shine” provides insight into the wonderfully complex characters in the film.  Also exclusive to the Blu-ray is an extended performance of “Hooked On Your Love,” as well as the music video for Whitney

SPARKLE is a timeless story of the bonds of family, the trials of success and the power of music. In her feature film debut, “American Idol” sensation Jordin Sparks stars as Sparkle, a young woman whose big

dreams seem almost impossible. She’s been warned against the pitfalls of the music industry by her protective mother (Whitney Houston), yet encouraged by the handsome and ambitious Stix (Derek Luke), Sparkle forms a trio with her sisters (Tika Sumpter and Carmen Ejogo). Together, they perform the soul-stirring songs that Sparkle pens. But as their fame grows, so do the risks of jealousy, self-doubt and insidious temptation.

A sweeping drama is brought to life with a powerful cast including Mike Epps, Omari Hardwick and CeeLo Green.

SPARKLE has a run time of approximately 120 minutesand has been rated PG 13 for mature thematic content involving domestic abuse and drug material, and for some violence, language and smoking.