A heroic fantasy, it also realistically captures the complex shadings of familial relationships,   particularly those between a mother and her teenage daughter. And for that, it’s brave indeed.

THE #1 ANIMATED FILM OF THE YEAR!

the Never-Seen-Before Animated Short “The Legend of Mor’du” 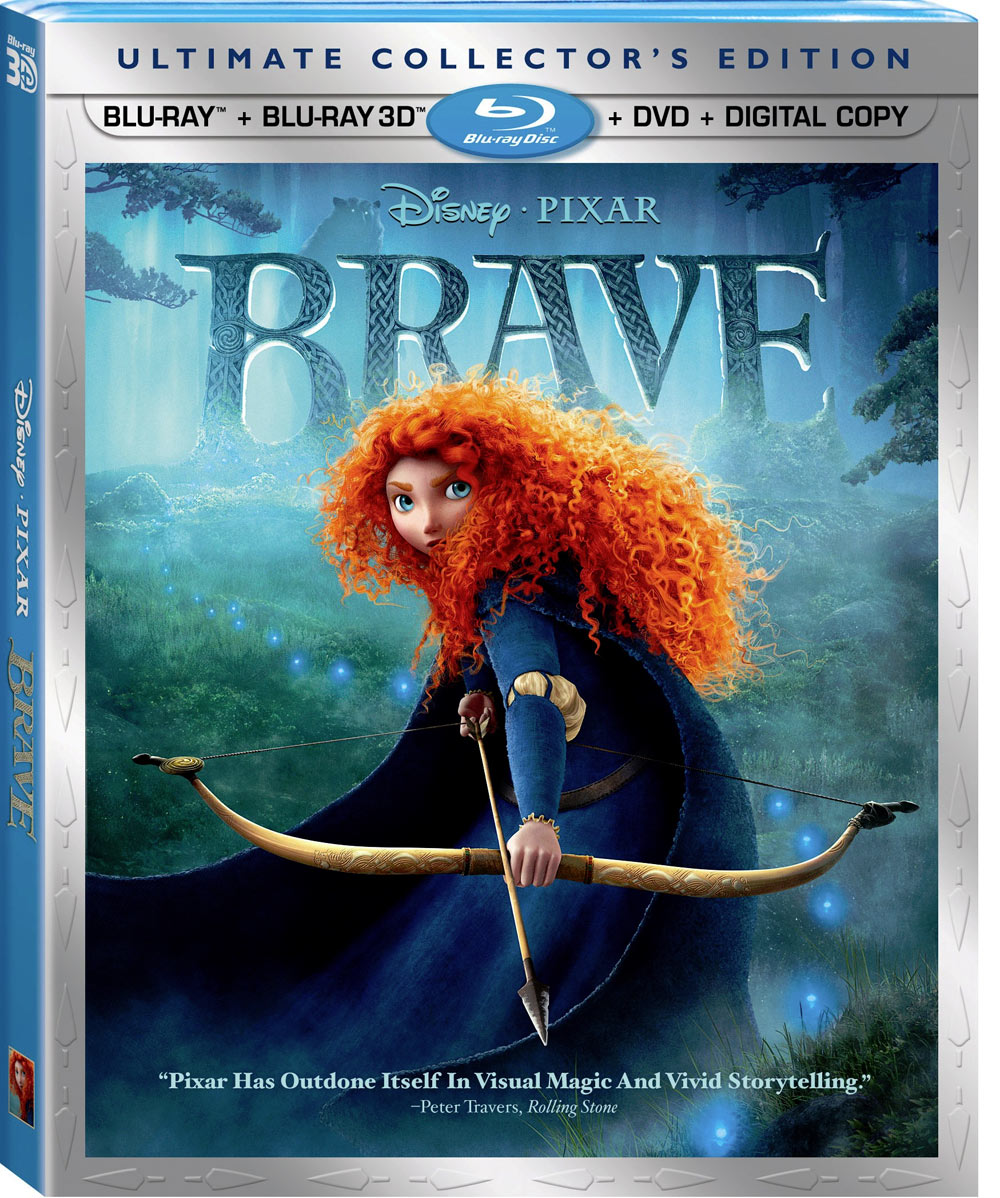 Burbank, Calif., August 22, 2012 — Disney•Pixar proudly announces the Blu-ray™ hi-def debut of “Brave,” the year’s #1 animated movie and Pixar Animation Studio’s 13th consecutive hit, on November 13, 2012.  A breathtaking adventure that has entertained audiences of all ages, the stunning Blu-ray release of “Brave” includes hours of all-new bonus material, extraordinary behind the scenes features, extended and deleted scenes, a mysterious and exciting, new short film, ‘The Legend of Mor’du,” and much more.

An original and thrilling journey set in the ancient and magical Highlands of Scotland, “Brave” follows the heroic journey of the headstrong, young adventurer Merida.  Determined to carve her own path in life, Merida confronts tradition and defies an age-old custom that inadvertently unleashes chaos, and forces her to discover the true meaning of bravery.  The 5-Disc Ultimate Collector’s Edition (1 Blu-ray 3D + 2 Blu-ray Discs + 1 DVD + 1 Digital Copy) has something for everyone – from the home entertainment enthusiast who demands the highest quality, state-of-the-art technology offerings, to the family who enjoys the interactive and engaging bonus features that only Blu-ray can provide – making this unique and beautiful film a “must add” to any home media collection.

“La Luna” Theatrical Short – Fans will love this charming short that accompanied the film in theatres.  It follows a young boy on his first night working the family business alongside his father andgrandfather.

“The Legend of Mor’du” Short – This rousing new bonus short film will give fans the chance to delve deeper into the legend behind Mordu, as told by the eccentric witch who transformed him.

Brave Old World – Fans will watch as members of the “Brave” production team investigate Scotland, exploring its land, culture, people and dialects. The research they gathered was brought thrillingly to life in thefilm.  Also, fans will hear what actress Emma Thompson (voice of Queen Elinor) thinks of Pixar’s take on her homeland.

Merida & Elinor – With the creation of Merida and Elinor, the Pixar filmmakers delved deep into the relationship between mother and daughter. Highlighting contrasts in character design, clothing, animation, voicing, even hairstyle, watch how the filmmakers explored this most important of relationships.

Bears – Take a look inside the art and design behind the bears in “Brave.” Each of the bears, gentle Mum-Bear and terrifying Mor’du, demanded a different approach to creating their physical appearance and personality.

Brawl in the Hall – A fascinating and hilarious inside look at the process of creating “Brave’s” fighting Scots, through animation, crowd simulation and fight choreography – not to mention a room full of grunting men whose vocal chortles added authenticity to the raucous scene.

Wonder Moss – Fans will explore how “Brave’s” technical artists examined the real Scottish countryside and studied the laws of nature, then turned thesefindings into computer codes that would blanket Merida’s Scotland in lush moss, lichen and bracken.

Magic –The magic and mystery of  Scotland is revealed to fans in this charming feature about the legends – from mystical potions to the will-o’-the-wisps – seen in “Brave.”

Clan Pixar – At Pixar, getting into character is a team effort. From making Haggis to Kilt Fridays to celebrating the Scottish poet Robert Burns, fans will see how the “Brave” production crew truly embraced Scottish themes and customs fueled the Pixar crew throughout the creation of “Brave.”

Once Upon A Scene – A closer look at the evolution of the storylines throughout the production of the film, including alternative openings to the film and many deleted scenes.

Extended Scenes – Three separate scenes are highlighted in their extended form. Director Mark Andrews discusses the decision making process that led to the shortened versions of these scenes.

“Fergus & Mor’du” An Alternate Opening – Once upon a time, “Brave” had a different opening scene. Eventually cut from the film, fans can see it in its entirety in this bonus feature narrated by the film’s director Mark Andrews.

Fallen Warriors Montage – A selection of deleted shots that were cut from the film late in production are presented to fans in various stages ofcompletion through a video montage narrated by director Mark Andrews.

Dirty Hairy People – Fans will enjoy this uproarious bonus feature discussing the development of “Brave’s” Scots – including the design of their hair, attire, and dirt-crusted physiques.

It is English…Sort Of – This bonus feature helps fans interpret some of the more Scottish lines in the film, thanks to the real Scottish actors who play the key characters and contributed their own dialects and sayings.

Angus – A look at Merida’s most trusted companion, Angus, a mighty Clydesdale.

The Tapestry – Fans will learn the story behind this embroidered emblem of family unity, which was lovingly crafted by “Brave’s” team of artists.

Art Gallery – A selection of breathtaking art from the creation of the film, showcasing characters, sets, scenes and stunning landscapes.

“The Legend of Mordu” All-New Short