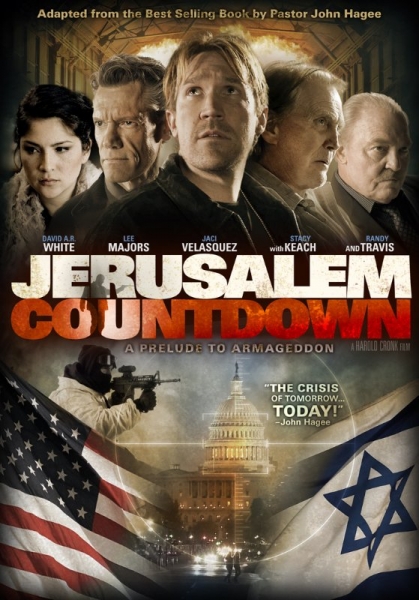 Jerusalem Countdown is a suspenseful thriller based on the bestselling book of the same name by Dr. James Hagee.

The prelude to Armageddon has begun.  With the Middle East in turmoil, Israel’s preeminent ally is thrust into an impending war and America is now the target as the battle for Jerusalem begins.  Jerusalem Countdown highlights the reality of a conflict between Israel and Islam. When nuclear weapons are smuggled into America, senior FBI agent, Shane Daughtry (David A.R White) is faced with having to find them before they are detonated. The clock is ticking and the only people who can help are a washed up arms dealer (Lee Majors), a converted Israeli Mossad Agent (Stacy Keach) and a by- the-book CIA Deputy Director (Randy Travis). Nuclear holocaust on American soil threatens global stability and the potential end of the world.  Jerusalem Countdown also features Nick Jameson, Jaci Velasquez, Marco Kahn, Carey Scott and Anna Zielinski.

The screenplay was adapted by David Harris, David White, Harold Cronk and Matthew Talford from the bestselling book Jerusalem Countdown by John Hagee.  The movie was produced by James Chankin, Matthew Tailford and Michael Scott.

To view the trailer for Jerusalem Countdown, please visit: http://www.watchgmctv.com/jerusalemcountdown.