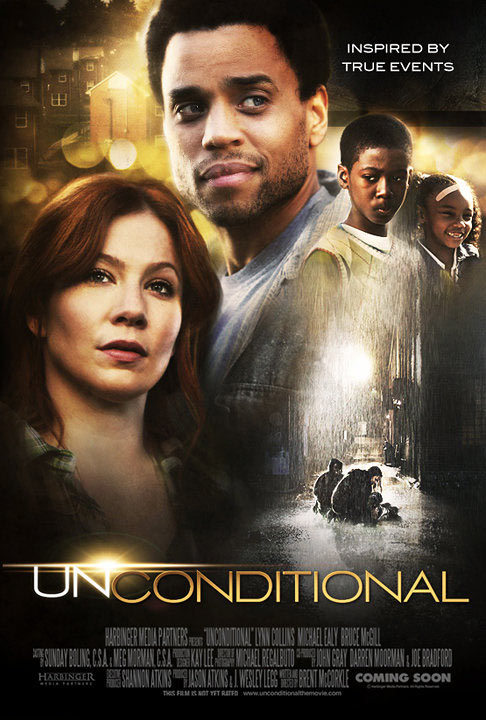 When describing the heart of the film, producers Jason Atkins and J. Wesley Legg state that, “No matter how dark your circumstance, working for those forgotten by society brings hope and turns servants into heroes.”

The two also developed Harbinger Media Partners, LLC with the intent on producing entertainment in a true, noble, right, pure, lovely and admirable way. Unconditional serves as its first production and was developed and produced in Nashville, Tenn.

Written and directed by Brent McCorkle, the film tells the story of Samantha Crawford (Lynn Collins), an acclaimed storybook artist, who seemingly had it all until she lost the love she cherished the most. When Sam’s storybook marriage is ripped away from her, she loses her faith and her will to live. Now fighting with despair, Samantha is obsessed with tracking down the murderer of her husband. However, a death-defying encounter with two children leads to a reunion with her oldest friend, Joe Bradford (Michael Ealy)… and begins Sam’s journey back toward God’s unconditional love.

Slowly dying of kidney disease, “Papa” Joe spends his last days serving fatherless children in the under-resourced community where he lives. Observing “Papa” Joe’s tireless love for “his” kids, Sam begins to find new purpose…until she comes face to face with her biggest fear. While she’s drawn to the innocence and hope of a child she’s befriended, the opportunity for revenge is strong.

Unconditional is a stirring film that will touch audiences and challenge them to consider what is most important in their own lives. The movie’s heartfelt themes include reconciliation, second chances, forgiveness, sacrifice and the true meaning of unconditional love.

Modeled after the real-life of “Papa” Joe, Unconditional serves not only to entertain but also inspire moviegoers to serve in areas of need just like Joe Bradford. Currently, Joe Bradford serves seven at-risk communities in and around Nashville through his ministry Elijah’s Heart. It is through this ministry that he champions a citywide multi-racial choir and coordinates walks of love where food and clothing are provided to those in need.

“My dream is that Unconditional inspires cities to unite in love to rescue one of our most precious commodities: thousands of at-risk and fatherless children torn by poverty and oppression,” says Bradford.

Motivated by Bradford’s philanthropic endeavors, Unconditional launched its ACT campaign. The ACT campaign encourages moviegoers to serve alongside scores of non-profit organizations and ministries in their community. Audiences are directed to the film’s site to find where they can serve, while organizations are also encouraged to sign up and become partners with the film and its message. Opportunities to learn more about giving, volunteering, sharing and following are provided at http://unconditionalthemovie.com/act.

Harbinger Media Partners, LLC is a Nashville, Tennessee-based company founded in 2009 to create and produce high-quality theatrical films that inspire viewers to pursue God and serve others. The company believes that these types of God-honoring films bring glory to God by being consistent with Biblical principles and the teachings of Jesus. For more info, please visit: http://harbingermediapartners.com/