The Pirates! band of misfits

Special Features Include an All-New “So You Want To Be A Pirate!” Mini-Movie, Exclusive Game, Behind-the-Scenes Featurettes and More 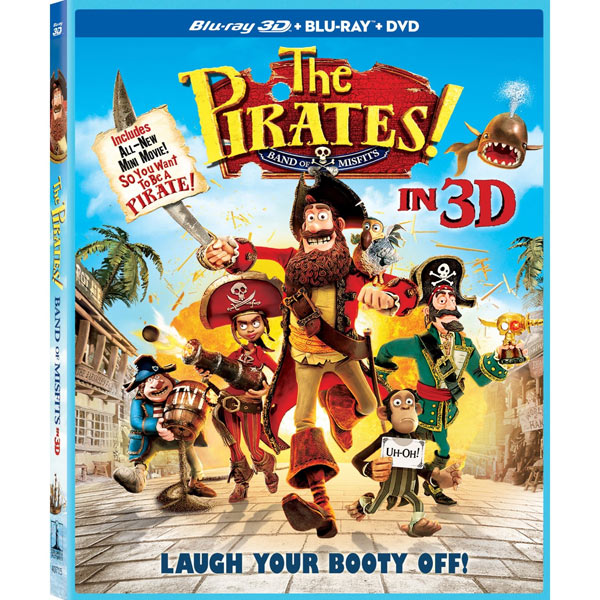 Culver City, Calif. (June 19, 2012) – It’s going to feel like a ‘plunderful life’ when Sony Pictures Home Entertainment debuts THE PIRATES! BAND OF MISFITS on Blu-ray 3D™/DVD Combo Pack, Blu-ray™/DVD Combo Pack and DVD — all with UltraViolet™ — on August 28th. From the Academy AwardÒ-winning Aardman (Chicken Run) and Sony Pictures Animation (The Smurfs), comes the all-new, swashbuckling stop-motion animated film that’s sure to entertain families from beginning to end. This critically acclaimed action-packed comedy adventure follows the luxuriantly bearded Pirate Captain, voiced by Hugh Grant (About A Boy), in his first animated role, and his band of misfits (Martin Freeman, Brendan Gleeson, Al Roker, Anton Yelchin and Ashley Jensen) as they frolic on the high seas in an amusing quest to win the coveted “Pirates of the Year” award. Along the way they battle a diabolical queen (Imelda Staunton) and team up with a haplessly smitten young scientist (David Tennant), but never lose sight of what a pirate loves best: adventure! The film also stars Jeremy Piven (TV’s “Entourage”) as Black Bellamy.

THE PIRATES! BAND OF MISFITS, Aardman’s most ambitious stop-motion film to date, is directed by Peter Lord, a founding partner of Aardman, director of Chicken Run (with Nick Park), and a two-time Academy Award® nominee for his short films made with the company. The film is co-directed by Jeff Newitt. The screenplay is by Gideon Defoe, based upon his books. Production Designer is Norman Garwood. Producers are Peter Lord, David Sproxton, and Julie Lockhart. Executive Producer is Carla Shelley.

The Blu-ray™/DVD Combo Packs and DVD boast hours of kid-friendly extras, including Filmmakers’ Commentary, the exclusive “Mr. Bobo’s Flash Card Challenge” game, and the all-new “So You Want To Be A Pirate!” mini-movie. Exclusive to the Blu-ray™ is the “Pirate Disguise Dress-Up” game, in which fans can help our swashbuckling pals get past Queen Victoria by disguising them in various silly get-ups. The Blu-ray™ also exclusively includes two behind-the-scenes featurettes: “From Stop to Motion,” taking fans on a journey through the making of the film, and “Creating the Bath Chase Sequence,” a look at the various stages involved with shooting the bath tub scene. Additionally, two short films with optional commentary from Director Peter Lord are exclusive to the Blu-ray™. Viewers can experience The Pirates in 3D with the 3-disc 3D Blu-ray™/DVD Combo Pack.

Set sail for a fun-filled voyage and hilarious pirate antics with the biggest Band of Misfits on the seven seas! When the infamous Pirate Captain (Hugh Grant) is shunned once again by his rivals Black Bellamy and Cutlass Liz, he sets his sights to win the coveted Pirate of the Year Award. With his trusted dodo, Polly and rag-tag crew at his side, the Pirate Captain will need to battle a diabolical queen, save a young scientist and never lose sight of what a pirate loves best: Adventure!

THE PIRATES! BAND OF MISFITS has a running time of 88 minutes and is rated PG for mild action, rude humor and some language.

Artwork and digital clips are available for download at www.sphepublicity.com. Visit Sony Pictures Home Entertainment on the Web at www.SonyPictures.com.

Sony Pictures Animation produces a variety of animated entertainment for audiences around the world.  The studio is following its worldwide comedy hits-the 2011 hybrid live action/animated family blockbuster, The Smurfs (3D) and the 2009 mouth-watering  Cloudy with a Chance of Meatballs (3D) with the family comedy Hotel Transylvania (3D) in September 2012 and The Smurfs 2 (3D) in July 2013.  Sony Pictures Animation, in conjunction with Aardman Animations, has produced two feature films:  the critically acclaimed, CG-animated family comedy Arthur Christmas (3D); and the stop-frame animated high-seas adventure, The Pirates! Band of Misfits (3D).  In 2007, Surf’s Up received an Academy Award® nomination for Best Animated Feature Film.  The division, whose first feature film Open Season led to a very successful movie franchise, is turning 10 this year.  Sony Pictures Animation is an operating unit of Sony Pictures Digital Productions

Aardman, based in Bristol (UK), co-founded and run by Peter Lord and David Sproxton, is a world leader in animation. It produces feature films, television series and television commercials for both the domestic and international market. The studio has won over 400 international awards including 4 Oscars®.

Aardman’s highly creative stop-motion style and creative sensibilities have proven popular with critics and audiences around the world. In 2000, Chicken Run, their debut feature, took in nearly $225 million worldwide; since then, Wallace & Gromit: The Curse of the Were-Rabbit grossed nearly $200 million and Flushed Away, their first CG feature, earned $176 million. All three films have achieved enormous critical acclaim, with the three films earning a total of 27 Annie Award nominations (the animation community’s highest honor). In addition, Wallace & Gromit: The Curse of the Were-Rabbit was honored with the Academy Award® for Best Animated Feature. http://www.aardman.com. In addition to The Pirates! Band of Misfits, Aardman’s recent film credits include the CG-animated Arthur Christmas.