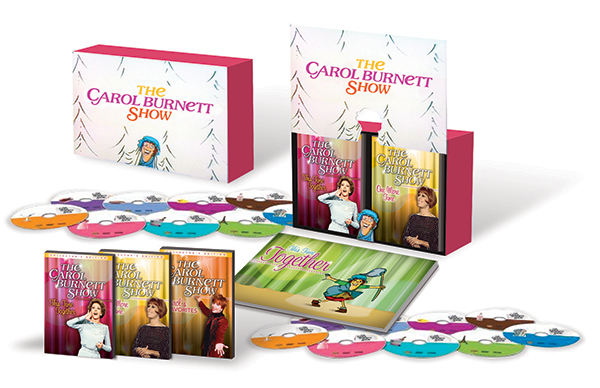 FAIRFAX, VA – JUNE 1, 2012 – The DVD collectors set that fans of classic TV have been waiting for is finally coming out as Time Life will now start taking pre-orders for THE CAROL BURNETT SHOW: THE ULTIMATE COLLECTION. The 22-DVD set contains 50 episodes from the award-winning and influential TV series, featuring the funniest and most beloved characters and sketches, including:

In addition to the classic sketch the Ultimate Collection also boasts over 400 musical performances, including many tributes to the musical theatre and movies Carol grew up with.

The Carol Burnett Show: The Ultimate Collection is host to over twelve robust hours of exclusive bonus features, including:

Exclusive featurettes on The Ultimate Collection include:

THE CAROL BURNETT SHOW debuted on CBS in 1967 and ran for 11 years, receiving 25 Emmy Awards five Golden Globes, and 12 People’s Choice Awards, making it one of the most honored shows in television history. TIME Magazine named THE CAROL BURNETT SHOW one of the “100 Best Television Shows of all Time” and Carol Burnett has been honored with more People’s Choice Awards than any other actress.

THE CAROL BURNETT SHOW: THE ULTIMATE COLLECTION is now available for pre-order at www.CarolOnDVD.com

One thought on “THE CAROL BURNETT SHOW: THE ULTIMATE COLLECTION AVAILABLE FOR PRE-ORDER”