BRING HOME THE #1 ANIMATED FILM OF THE YEAR FROM THE CREATORS OF DESPICABLE ME AND THE IMAGINATION OF DR. SEUSS!

Plus Get Three Never-Before-Seen Mini Movies Available only on 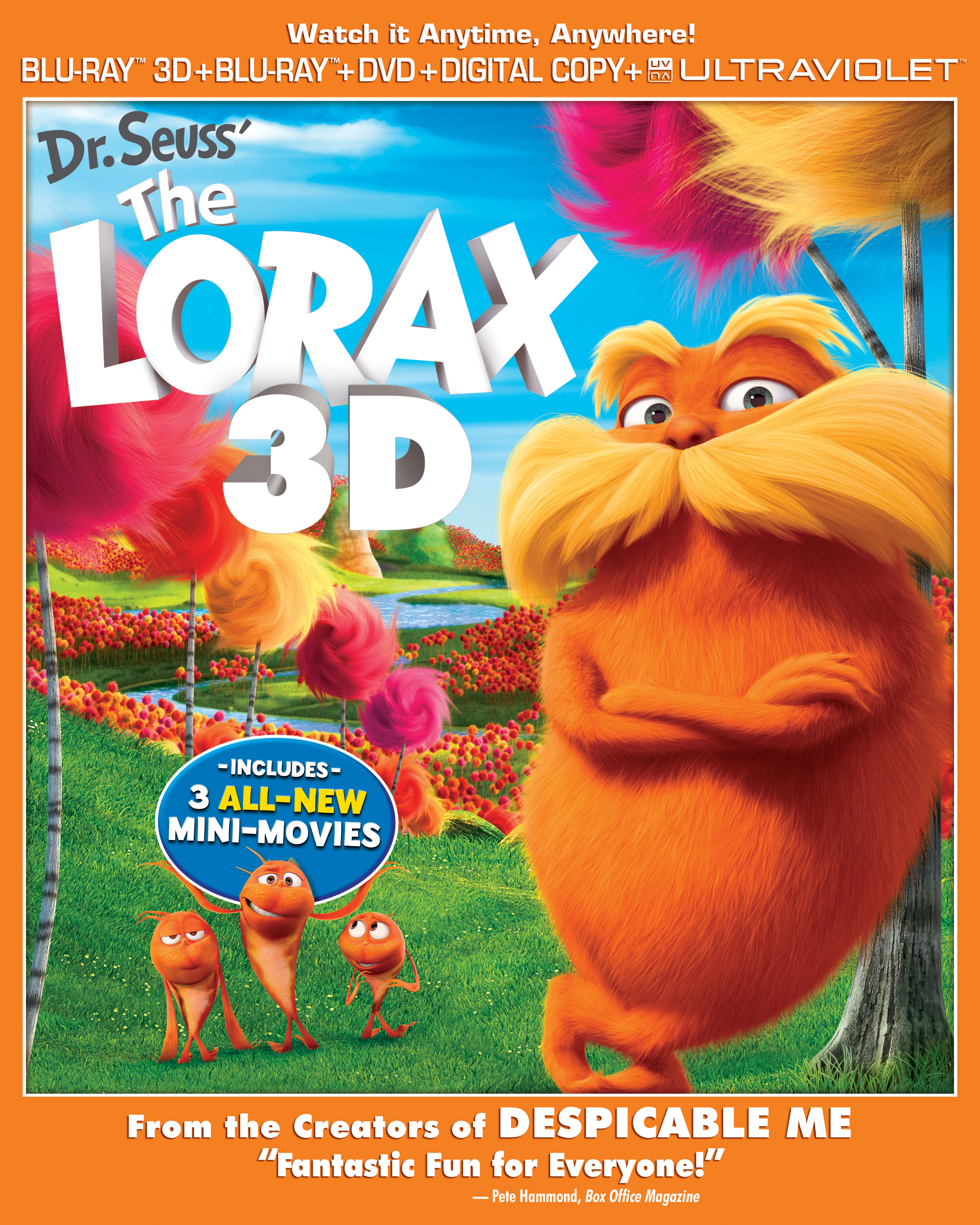 Universal City, California, June 5, 2012 – The colorful and captivating world of Dr. Seuss bursts onto the screen as never before on August 7, 2012 in the hilarious and captivating adventure, Dr. Seuss’ The Lorax from Universal Studios Home Entertainment.  Available on Blu-ray™ 3D Combo Pack and Blu-ray™ Combo Pack — both featuring DVD, Digital Copy and UltraViolet™ so you can watch it anytime, anywhere — Dr. Seuss’ The Lorax is non-stop family fun that includes three delightfully entertaining mini movies not shown in theaters,available only on the Blu-ray™ Combo Packs.  The film will also be available on DVD and Digital Download.   To view a trailer of the new mini movies, visit http://youtu.be/3DXU1348PHg

Dr. Seuss’ The Lorax transports viewers into a fantastical landscape imagined by Dr. Seuss and vividly brought to life by Chris Meledandri and his acclaimed filmmaking team at Illumination Entertainment (Despicable Me). Directed by Chris Renaud (Despicable Me) from a screenplay adapted by Ken Daurio and Cinco Paul (Despicable Me, HOP, Horton Hears a Who) from the 1971 children’s classic, the film is an imaginative journey that begins in the town of Thneedville, where a boy searches for the one thing he knows will win the heart of his dream girl. But in order find it, he must discover the story of the Lorax, the often grumpy but loveable protector  of Truffula Valley, in an exciting adventure filled with comedy and heart that USA Today’s Claudia Puig calls, “The right blend of funny, silly, and sweet.”

One of the best-selling children’s book authors of all time, Theodor “Dr. Seuss”

Geisel created more than 40 cherished books that have been published in 95 countries and 17 different languages, selling more than half a billion books worldwide. The Lorax, which Geisel named his favorite work, is included on the “Educator’s All Time Top 20 List of Children’s Books.”

Dr. Seuss’ The Lorax Combo Packs contain a Blu-ray™, DVD and a Digital Copy of the film compatible with iTunes®, iPad®, iPhone®, iPod™, Android (or select online retailers), as well as UltraViolet™.  UltraViolet™ is the revolutionary new way for consumers to collect movies and TV shows in the cloud to instantly stream and download to computers, tablets and smart phones. Consumers can now truly enjoy their movies anytime, anywhere on the platform of their choice.

BONUS FEATURES EXCLUSIVELY ON THE BLU-RAYTM:

The imaginative world of Dr. Seuss comes to life like never before in this visually spectacular adventure from the creators of Despicable Me! Twelve-year-old Ted will do anything to find a real live Truffula Tree in order to impress the girl of his dreams. As he embarks on his journey, Ted discovers the incredible story of the Lorax, a grumpy but charming creature who speaks for the trees. Featuring the voice talents of Danny DeVito, Ed Helms, Zac Efron, Taylor Swift, Rob Riggle, Jenny Slate and Betty White, Dr. Seuss’ The Lorax is filled with hilarious fun for everyone!

Dr. Seuss’ The Lorax is the third feature created by Universal Pictures and Illumination Entertainment (Despicable Me, Hop).

Based on the Book by: Dr. Seuss

In honor of its Centennial anniversary, Universal Pictures proudly salutes 100 years ofunforgettable films that have entertained audiences and touched the hearts of millions around the globe. In celebration of our first 100 years, UniversalStudios Home Entertainment is proud to present a selection of our many beloved movies as part of an extensive year-long program that underscores the studio’s rich cinematic history and indelible cultural impact.