GET READY TO SUPER-CHARGE YOURSELF WITH THE SERIES THAT STARTED A GLOBAL POP CULTURE PHENOMENON, POWER RANGERS 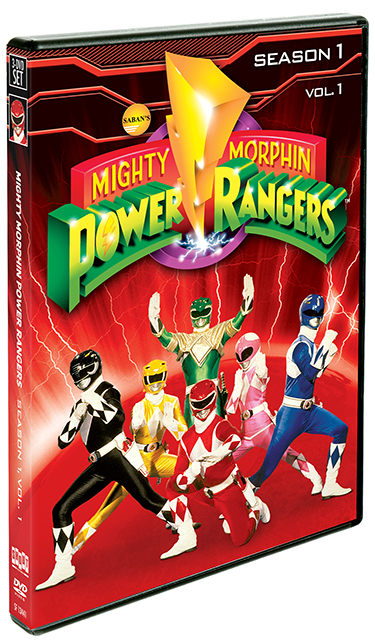 LOS ANGELES, CA, May 9, 2012 – Following its debut in 1993, Saban’s iconic live-action pop culture series, Power Rangers quickly became the most watched children’s television program in North America. Emphasizing the importance of teamwork, responsibility and helping others by following the adventures of a group of ordinary young people who “morphed” into superheroes, this long-running series has been seen in more than 60 countries, translated into numerous languages, and remains a mainstay in children’s programming blocks. For 19 years, the highly entertaining saga and fan favorite characters from Power Rangers have captivated children and adults alike and are beloved by legions of fans worldwide.

Now you can return to where the phenomenon began and re-live these thrill-packed adventures when Shout! Factory, in collaboration with Saban Brands, unleashes a cornucopia of home entertainment offerings, many of which have never been released on DVD, from the original series Power Rangers. Through unprecedented access to Saban Brands’ vast archive of content, many of these DVD collections produced by Shout! Factory boast extensive bonus materials and collectible packaging, making them must-haves for loyal fans and collectors.

The first multi-disc set to be released will be the Mighty Morphin Power Rangers: Season One, Volume One 3-DVD set, which will arrive in stores and will be available through select digital entertainment platforms on August 21, 2012. Marking the DVD debut of the original Power Rangers series, Mighty Morphin Power Rangers: Season One, Volume One features the first 30 original episodes from the first season and delivers over 10 hours of high-energy, family friendly entertainment. Poised to attract a new audience of kids as well as young adults who grew up with this popular series, this 3-DVD set is priced to own at a suggested retail price of $19.93. Pre-order is now available at Amazon.com and ShoutFactory.com.

Mighty Morphin Power Rangers: Season One, Volume Two 3-DVD set is slated to arrive on store shelves Fall 2012. Featuring the subsequent 30 original episodes, this DVD set continues more action-packed adventures of five teens, who quickly learn the full impact and awesome responsibility of their new powers and weapons. The evil villain, Rita Repulsa and her henchmen prove to be very worthy adversaries for the young super heroes, and they are challenged at every turn.

In an effort to provide avid collectors with an exclusive first-to-own experience, fans will have the first opportunity to collect upcoming box sets through a Time Life direct-response television and online campaign. Shout! Factory has teamed up with Time Life to make Mighty Morphin Power Rangers Season One 6-DVD set and the 40-DVD collection of Power Rangers: Seasons One – Seven directly available to fans starting July 30, 2012 through Time Life’s direct-response on-air TV campaign, as well as online.

The Power Rangers: Seasons One –Seven 40-DVD collection will include:

As excitement builds for these anticipated home entertainment releases, Shout! Factory, Saban Brands, and Time Life will announce additional news and activities for fans in the upcoming months. Meanwhile, fans will have the opportunity to learn more about upcoming collections by following us on Facebook (https://www.facebook.com/powerrangers) and Twitter (@shoutfactory). Join the excitement and relive the action on DVDs!

About Saban Brands
Formed in 2010 as a subsidiary of Saban Capital Group, Saban Brands (SB) was established to acquire and develop a world-class portfolio of properties and capitalize on the company’s experience, track record and capabilities in growing and monetizing consumer brands.  SB applies a strategic transmedia management approach to enhancing and extending its brands in markets worldwide and to consumers of all ages.  The company provides full-service management, marketing, promotion and strategic business development for its intellectual properties including comprehensive strategies unique to each brand, trademark and copyright management and enforcement, creative design, retail development, direct-to-consumer initiatives and specialized property extensions.  SB is led by a superior management team with decades of experience in media, content creation, branding, licensing, marketing and finance. For more information, visit www.sabanbrands.com

About Shout! Factory
Shout! Factory is a diversified entertainment company devoted to producing, uncovering and revitalizing the very best of pop culture. Founders Richard Foos, Bob Emmer and Garson Foos have spent their careers sharing their music, television and film faves with discerning consumers the world over. Shout! Factory’s DVD offerings serve up classic, contemporary and cult TV series, riveting sports programs, live music, animation and documentaries in lavish packages crammed with extras. The company’s audio catalogue boasts GRAMMY®-nominated box sets, new releases from storied artists, lovingly assembled album reissues and indispensable “best of” compilations. These riches are the result of a creative acquisitions mandate that has established the company as a hotbed of cultural preservation and commercial reinvention. Shout! Factory is based in Santa Monica, California. For more on Shout! Factory, visit shoutfactory.com.