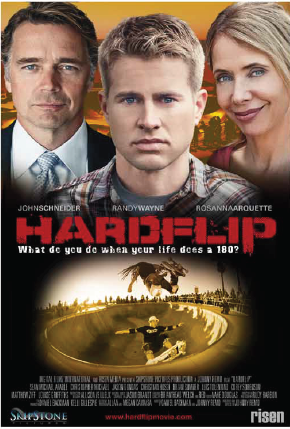 HARDFLIP stars John Schneider (October Baby, Smallville, The Dukes of Hazzard) and Randy Wayne (To Save a Life and Honey 2,and ABC Family’s The Lying Game), along with Sean Michael Afable (To Save a Life and Akeelah and the Bee) and Rosanna Arquette (Desperately Seeking Susan and The Whole Nine Yards).

Co-written by Daniel Backman, HARDFLIP follows the story of Caleb, a young skater whose ill mother (Arquette) and absent father leave him reaching for the only hope he has—becoming a sponsored skater. After finding a stack of old love letters, he sets out to find the father he never knew and inadvertently begins a journey he never could have expected. This story explores what happens when we let go of our anger and pain and forgive those who have hurt us most.

The recent recipient of the People’s Choice Award for Best Feature Film at the 2011 San Diego Christian Film Festival, HARDFLIP is the third feature film for SkipStone Pictures and Johnny Remo.

“Our films are thought provoking, soul challenging, and life altering,” says Johnny Remo.  “HARDFLIP is an opportunity to change people’s lives in a very positive way.”

The  HARDFLIP grass roots campaign is drawing support from a variety of organizations, church’s and numerous skate ministries including “I Am Second,” “Movie to Movement” and Christian skaters including Christian Hosoi and Brian Sumner, who are working together to bring HARDFLIP to the theaters.

“This film tackles the challenging subject of Forgiveness in a very visceral way,” says Christian Hosoi, world class pro skater. “HARDFLIP not only brings a vital, thought-provoking, life changing, message, it entertains us as well. We’re proud to be among those supporting HARDFLIP in Huntington Beach, Calif.”

HARDFLIP offers viewers an enjoyable, entertaining, brutally honest film about truth . . . and the power to forgive. But, the film is more than that—it tells the story of being raised by a single mom and the pain, anger and sacrifice from the fallout of not having a father in the home. HARDFLIP provokes audiences to explore their own views of life and the importance of forgiving and being forgiven.

Recently judged “Family-Approved” by the prestigious International Dove Foundation, HARDFLIP is gaining support from numerous ministries and organizations including Christian Cinema, a company dedicated to helping consumers find the best in faith-based and family friendly movies.

“HARDFLIP is an extremely entertaining movie and its makers deserve to be applauded — and not just for the enormous effort they made to get the thing produced.” says Christian Cinema. “Professional skaters Brian Sumner and Christian Hosoi bring a superb level of skill and stunt work to the film. This is definitely a film to see.”

About Movie to Movement:

Movie to Movement™ was created to promote a culture of Life, Love & Beauty. They do this through the production of our own films, as well as sharing others. Movie to Movement believes that film is today’s most influential medium and that we can change culture, but first we must change Hollywood. By going to see Movie to Movement™ promoted and produced films we viewers are supporting good films and send a message to Hollywood that more need to be made.

For more information on Movie to Movement, October Baby, and to sign up to be a “theater captain,” please visit http://www.movietomovement.com/en-us/nowplaying/movie.aspx?id=55.

About Risen Media, LLC:
Risen Media, LLC is committed to distributing and producing quality faith-based and family-friendly movies, books, magazines and other media to infuse a positive message in our culture. Risen Media promotes the vision of Faith, Hope and Love not only to inhabit mainstream media, but also to thrive in it to sustain our culture.

About Digital Filmz:
Digital Filmz is the distribution arm for SkipSkipStone Pictures and has distributed SkipStone’s last three movies, “A Letter to Dad”, “Cutback”, and “Hardflip”.