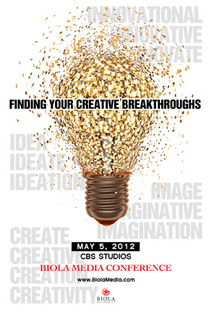 Studio City, CA – A stellar lineup of workshops and panel discussions hosted by industry leaders has been announced this week for the 2012 Biola Media Conference. “Blue Like Jazz” director Steve Taylor was added to the speaker lineup, joining other leading entertainment experts for the 17th annual Biola Media Conference on Saturday, May 5 at the renowned CBS Studio Lot.

Taylor’s feature film “Blue Like Jazz” is an adaptation of the “New York Times” bestselling memoir by Donald Miller released by Roadside Attractions in April. Taylor made history as the only music artist to twice win Billboard Music Video Awards for self-directed music videos. His many credits as a director include the Francois Truffaut homage he shot in Paris for Sixpence None The Richer’s “Kiss Me.” Taylor also directed and starred in the award-winning long-form video “Squint: Movies From The Soundtrack,” shot in ten countries around the globe including Vietnam, Nepal, United Arab Emirates and Turkey.

“To have this caliber of creative, decision-making leaders available to encourage and educate their fellow industry professionals attending the Biola Media Conference is a great honor,” states Jack Hafer, producer of “To End All Wars” and chairman of Biola’s cinema & media arts department. “We are excited to expand the expertise of Hollywood professionals in balancing their craft with their faith, making an impact on the Hollywood community.”

FINDING YOUR CREATIVE BREAKTHROUGHS:  HOW TO GET PAID
Simon Swart and Ray Rodriguez team up to lead this workshop through an interactive exercise to help you learn how to think about the business of show and how to get paid. Take Simon’s “12 Windows of Distribution” and push a project through to see how you would pay back your investors.

FINDING YOUR BREAKTHROUGHS AS A FAITH & FAMILY FILMMAKER
Cindy Bond, Chevonne O’Shaugnessy and Travis Mann have put together a company unlike any in the world. They have found a way to sell Family and Faith-Based content across the globe. Now they are adding funding and development to their studio. You will want to get to know this world-class team.

FINDING YOUR BREAKTHROUGHS IN A WORLD OF NEW CONTENT
Hulu is signing exclusive deals with short-form content producers. YouTube is handing out a hundred thousand dollars to dozens of short-form content creators. Disney is hiring executives to repurpose their library into short-form segments in anticipation for an international blitz of online sales. Those who get there first often create a niche that continues to pay for years. Three experts will help you understand how they tapped into this new world of content.

FINDING YOUR BREAKTHROUGHS BY BEING GREAT IN A ROOM
There is an art to getting your finished project in the right hands and getting the check.  One of the key elements you must master is how to interact with the studios, networks, agencies and big production houses where you are supposed to know how to pitch yourself and your work without seeming to pitch at all. Dan Ewald and Rajeev Sigamoney have given pitches all over town and have produced many projects with leaders in the industry who went from strangers to partners. They will show you how to prepare for your inevitable date with destiny.

FINDING YOUR BREAKTHROUGHS USING THE MORAL PREMISE
Stan Williams understands story. He has used his understanding to write one of the best books on the subject. He has also launched a career where he is seen as part of the team that develops Will Smith’s projects.  It all revolves around a non-intuitive, but easily mastered concept called the “Moral Premise.”

FINDING YOUR BREAKTHROUGHS AS A VISUAL ARTIST
What elevates cinema from good to great? What is the process a director uses to make award-winning cinema? Moderator and filmmaker Camille Tucker will help our two, top visual artists find the words to help us understand how to find our breakthroughs and create works we can be proud of. Dean Yamada creates film after film receiving the highest honors from the world of short film jurors. Kevin Willson has had his last three Doritos SuperBowl submissions chosen over tens of thousands of worldwide competitors striving for the million dollar first prize in comedy commercial creation.

FINDING YOUR BREAKTHROUGHS BY BRAINSTORMING
McNair Wilson first developed his process as artistic director of a successful, for profit, street theatre company—SAK Theatre—producing 42,000 performances at EPCOT. He refined his creative problem-solving tool during his years as a Disney Imagineer. McNair was on concept and design teams for five new Disney theme parks and other projects. He also led the “first team” that wanted to strap Disney guests into a rusty old elevator and drop them off the thirteenth story of a haunted hotel. “Tower of Terror” is now one of the top three attractions in FOUR Disney parks. McNair will teach you how to enlist his powerful “7 Agreements of Brainstorming” to re-imagine anything — everything. This is the subject of McNair’s new book, “HATCH! Brainstorming Secrets of a Theme Park Designer,” available in May.

FINDING YOUR BREAKTHROUGHS AS A PROFESSIONAL ACTOR
Acting is perhaps the hardest job in the world. Yet every month dozens of new faces find their way onto screens and into the hearts of fans. How do you become a professional Hollywood actor as a person of faith? How do you navigate and stay afloat in a world of rejection and disappointment? Can you find fulfillment in the journey?

FINDING YOUR BREAKTHROUGHS IN REAL LIFE HOLLYWOOD
Three of our sharpest alumni came to us and said, “We were not ready for real life in Hollywood!”  Chris Herzberger, Laura Falcinelli and David Jacobson have all had significant career advancements. They’ve developed a workshop so others can be prepared when the reality of working in Hollywood begins. They know how to climb the ladder.

PITCHFEST
Available only through pre-registration, with the Pitchfest Add-On Module, you will sit face-to-face with industry professionals who will help you move your finished project forward. You will learn, network, and perhaps get a follow-up meeting to pursue the conversation that begins in this speed-dating format.

The Biola Media Conference is produced and sponsored by Biola University’s acclaimed Cinema and Media Arts Department. The event is also a member of the FrontGate Media group, the #1 culture-engaged media group in Christendom. Sponsorship opportunities are available at http://tinyurl.com/FrontGateBMC.  Admission is $150 before April 26 and $180 at the door. Lunch and coffee bar are provided. For more information or to register online, visit www.BiolaMedia.com.

About Biola Media Conference:
In its 17th year, the Biola Media Conference exists to educate, inspire, and network media professionals while providing creative inspiration into the spiritual nature of any career in the media industry. The conference attracts participants who will benefit from direct interaction with acclaimed industry pros who are at the top of their craft. From CEOs to students, attendees secure valuable information, insight, and contacts that strengthen their character and their careers.