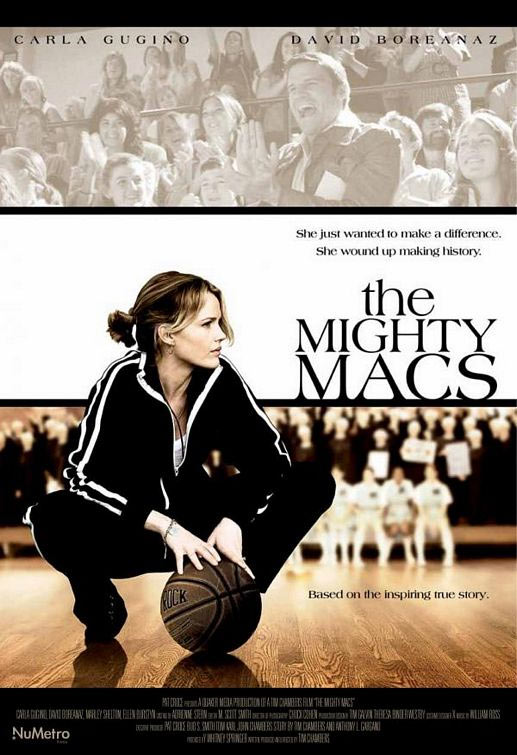 PHILADELPHIA – Oct. 5, 2011 – THE MIGHTY MACS—an inspiring, family-friendly sports Cinderella story—premieres nationwide Oct. 21 riding a wave of excitement for family films across the country with continued strong showings by such pictures as COURAGEOUS and DOLPHIN TALE.

And in a case of life imitating art, THE MIGHTY MACS—an underdog story about the first U.S. women’s basketball championship—is becoming an inspiring underdog story itself. Initially scheduled to premiere on 250 screens nationwide, that count jumped to 1,000—and growing—as theater operators saw advance screenings and shared test-audience excitement.
Additionally, across the country various organizations are lining up to support the film, ranging from universities to church groups.

“We’re thrilled but not surprised because THE MIGHTY MACS has been touching advance audiences deeply for months,” said Tim Chambers, director, screenwriter and executive produce of his feature debut. “The story of Coach Cathy Rush and her team of non-scholarship athletes entertains, inspires and uplifts. It’s a perfect family film.”

From Quaker Media and Ocean Avenue Entertainment, THE MIGHTY MACS tells the inspiring and true story of Hall of Fame Coach Cathy Rush. In 1972, just out of college herself, she took a rag-tag team of overachievers from Immaculata College, a small, all-girls Catholic school, to the first collegiate women’s basketball championship. What they did there is only slightly more incredible than how they got there. Starring Carla Gugino, David Boreanaz and Academy Award-winner Ellen Burstyn, THE MIGHTY MACS vividly brings to life what can happen when we believe in our dreams.

With October as National Breast Cancer Awareness Month, there is a moving “story behind the story” of THE MIGHTY MACS as well. Not only is Cathy Rush a cancer survivor, but Katie Hayek, a young featured actress in the film, was diagnosed with cancer the day filming started. With Tim Chambers’ support, Katie continued working on THE MIGHTY MACS through her chemotherapy treatments, turning in a stirring performance as Trish, the Macs’ best player.

In addition to the increased screen count, some theater operators are adding earlier show times to accommodate school groups. And other groups are getting on board:

“We’re so gratified by the support, but we know these groups will be repaid many times over by the positive message of this G-rated film,” said Chris Bueno, president of Ocean Avenue Entertainment. “The impact of THE MIGHTY MACS is remarkable. For anyone who ever had a dream, this is a must-see film.”

For those interested in “Backing the Macs,” the website, TheMightyMacs.com offers show times and locations, ticket sales information, group sales information and discounts, and opportunities to support the film locally.