AGAINST A WORLD OF CORRUPTION, THEIR GREATEST HOPE IS EACH OTHER 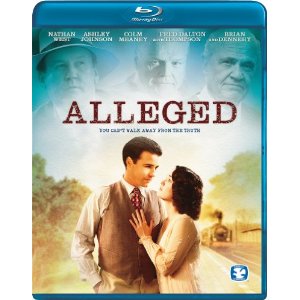 Hear the verdict on DVD and Blu-ray™ November 8

Chatsworth, CA – In 1925, on a sweltering summer day in a small Tennessee town, two ideologies prepared for battle. Here, the Scopes “Monkey Trial” began – the historic confrontation fueled by the opposing forces of theology and science. On November 8, Image Entertainment and Slingshot Pictures will release Alleged, a stirring romantic story of a young reporter and his fiancée set against the whirlwind of fundamentalism and sensationalism, between moral responsibility and journalistic opportunity. Based on actual historical events, Alleged is a film festival favorite: recognized at the Boston, Charleston, Grand Rapids, Flint and Brantford festivals as well as winning the People’s Choice award for ‘Best Narrative Feature’ at the Anthem Libertarian Film Festival. Winner of the Dove Foundation’s “Family Approved” seal, Alleged will be available on DVD for an MSRP of $27.97 and on Blu-ray™ for $29.97. Pre-book is October 11. The DVD and Blu-ray™ will also include a Discussion Guide special feature for church and home group study of the film’s themes.

Love and faith are put to the ultimate test in this drama set against the landmark Scopes “Monkey Trial” of 1925. Charles Anderson (Nathan West, Miracle) is a talented young reporter engaged to Rose (Ashley Johnson, The Help), who works with him at the Tennessee small town newspaper his late father founded. The “Trial of the Century” brings brilliant adversaries William Jennings Bryan (Fred Dalton Thompson, The Genesis Code) and Clarence Darrow (Brian Dennehy, Cocoon) to Charles’ hometown. But as the trial unfolds, Charles is caught up in the media circus and becomes torn between his journalistic integrity and impressing his mentor, the colorful Baltimore Sun editor H. L. Mencken (Colm Meaney, Star Trek: The Next Generation), who presses him to “make a story” instead of report one.

Image Entertainment, Inc. (OTCQB: DISK) is a leading independent licensee and distributor of entertainment programming in North America, with approximately 3,200 exclusive DVD titles and approximately 340 exclusive CD titles in domestic release and more than 450 programs internationally via sublicense agreements. For many of its titles, the Company has exclusive audio and broadcast rights, as well as digital download rights to over 2,100 video programs and approximately 400 audio titles containing more than 6,000 individual tracks. The Company is headquartered in Chatsworth, California. For more information about Image Entertainment, Inc., please go to www.image-entertainment.com.