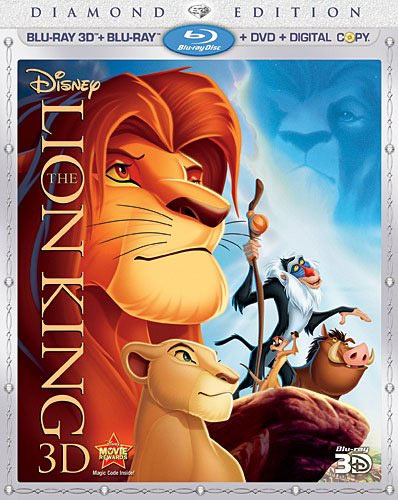 Don Hahn is no stranger to blockbusters. He’s the film producer behind some of the most successful animated films released by Walt Disney Studios,, including The Lion King, Beauty And The Beast, and Who Framed Roger Rabbit.

What went through your mind when you first heard that The Lion King was going to be re-imagined in stereoscopic 3D?

When I first heard about the idea, we were working on Beauty And The Beast in 3D. The early 3D footage from Beauty And The Beast was amazing, so I thought to myself, ‘If we can make Beauty work, then The Lion King will also work.’ And it really does work. The 3D has enhanced the movie and made it a more immersive film experience. It’s extraordinary that it works because it’s a flat movie. It was drawn by hand. There is nothing inherently 3D about it, but with some amazing technology, we’ve been able to turn it into an extraordinary 3D movie.

How long does it take to convert a movie like The Lion King into stereoscopic 3D?

I think it took about nine months in total. I believe we spent three months preparing and testing the movie, and then six months in actual production. We don’t just work on the picture, we also work on the sound. We go back and remix everything so that the sound mix is more in keeping with the 3D visuals that you’re seeing on the screen.

How involved were you in the 3D process?

One of the reasons we feel like we can do this is because our number one rule is to involve the original filmmakers. I think it’s very difficult – if not impossible – to recreate a movie unless the original directors, producers and creative team that were involved in the original movie were there to shepherd it along. That’s why we brought in Rob Minkoff and Roger Allers who directed the original movie 17 years ago and had them be a part of it at every interval. They looked at every shot and they looked at every reel, as did I. We had some amazing support from the artists and technicians at Disney Animation Studios. They’re obviously at the top of their game right now and they used the best of technology to turn these movies into an amazing 3D experience.

How did you react when you first saw the finished film in 3D?

When I saw The Lion King in 3D, I was immediately transported to Africa. I was amazed and delighted – and it was like nothing I’d ever seen before. This is a great way to visit Africa without having to travel for 25 hours to get there, and I liked that. Watching the movie gives you a feeling like you’re not only visually in Africa, but the audio and everything else helps you transport to this other time and place. The 3D really accentuates that. It’s magical to see it in 3D.

Not only is this 3D version of The Lion King going in cinemas, but it’s also being released on Blu-ray and Blu-ray 3D. What can you tell us about the Blu-Ray extras?

What do you think of the advances in technology that allow us to have 3D home theaters in our living rooms?

I think it’s fantastic that technology has progressed to allow us to have amazing systems in our homes to be able watch films. The ability to have a television or a projector that is able to work in 3D makes a Blu-ray release much more of an event. You can pop the disk in and enjoy it yourself – but you can also gather the family around to watch the 3D version in your own living room. To be able to get a classic film like The Lion King on Blu-ray in 3D is going to start changing peoples’ perception of what 3D can do.

How did you get involved with The Lion King?

I had just finished Beauty And The Beast in the winter of 1991. At that time, Jeffrey Katzenberg and Peter Schneider were running the animation department at Disney – and they asked me to get involved with a new film called King Of The Jungle. The movie was in the very early stages of development. A crew had just gone to Africa to do a research trip and when they came back, I was there to start work with them. We immediately started to talk about the story and we came up with the idea of working around the theme of responsibility. Each of us has our own responsibilities in life and we either live up to them or we don’t – but that led us into the idea of the circle of life and how we all have our place within it. Those early ideas all came to life in the early part of 1992, and you can hear about them in one of the extras on the Blu-ray disk.

Can you tell us some more about it?

Well, I cut together a short film that you can watch on the Blu-ray extras. It’s a memoir that highlights a lot of my recollections of how the movie started and how it got off the ground. The extra is full of home movies and behind-the-scenes shots, and it’s shot in a non-glossy way so it feels like you’re being taken by the hand and shown the entire movie-making process. We look at how King Of The Jungle got off the ground, how it got renamed, how Sir Elton John became involved, how Hans Zimmer became involved, how it was cast, the people that made the movie, some of the arguments and disagreements that went into it… It’s full of fascinating anecdotes and memories.

Can you talk about the casting process for the movie?

I think the first actor to sign up for The Lion King was Matthew Broderick. We knew him from his work in theater and in films like Ferris Bueller’s Day Off. Matthew felt like the kind of character who could be irresponsible and likeable, but you also felt that he could come back in a very heroic way. He was perfect.

Who signed up next?

James Earl Jones was an obvious choice for Mufasa. We wanted to go with a tremendous father figure and he was ideal. However, there were a number of other famous names floating around for the role. Some of the executives wanted to go with Sean Connery – but in the end, James Earl Jones seemed like such a big voice and such a fatherly figure that we could all relate to. Thank god he said yes.

What was your biggest challenge in casting the voices?

It was a lot tougher to find the voices for Pumbaa and Timon. We thought about Eddie Murphy at one stage, and we also thought about Steve Martin – but finally we discovered Nathan Lane and Ernie Sabella. Originally, Nathan and Ernie came into test for the hyenas. They read the hyena dialogue together and they were hilarious, but they don’t quite fit into the roles. That’s when we came up with the idea of trying them for Pumbaa and Timon. We animated some Pumbaa and Timon scenes to their voices and it was a perfect fit. They worked really well together and they became the comedy duo at the heart of the movie.

Why do you think the movie has been so successful?

The quality of the movie is obviously great and it’s a very entertaining story – but I think most of the success lies in the universal themes of the movie because everyone can relate to them. We can all relate to taking our place in our family and carrying on our family’s legacy. We can also relate to not wanting to disappoint our parents and taking our place in the circle of life. At its heart, this is a movie about growing up and taking responsibility. There’s that day in all our lives when we have to grow up; sometimes it comes with the birth of a child, or sometimes it comes with the death of a parent. Those are the crucial days in our lives that change us forever – and that’s what The Lion King is about. We created a story about lions in Africa telling a very human tale about responsibility and taking your rightful place in life. This allegorical storytelling is very powerful and it’s something that Disney does better than anyone else. I couldn’t be more proud to have been part of the whole process with The Lion King. It’s been a joy to work on, and I hope it will be around for many years to come.
***The Lion King releases TODAY on Blu-Ray/DVD and Blu-Ray 3D!***