To Celebrate the Release of Zookeeper on Blu-ray and 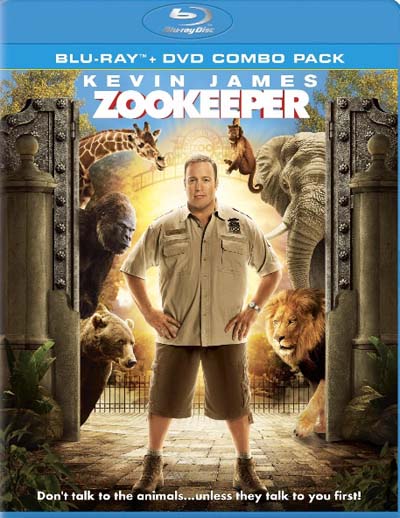 CULVER CITY, CALIF. (October 4, 2011) – Sony Pictures Home Entertainment and RockYou® will integrate the world of Zookeeper as part of the all-new Zoo World 2. Fans of the film, starring Kevin James, will be able to play with their favorite characters from the film including Griffin the Zookeeper and his pals Bernie the Gorilla, Joe the Lion, Mollie the Giraffe and Barry the Elephant. With the purchase of Zookeeper on Blu-ray, DVD or Blu-ray + DVD Combo Pack, users will earn 12,500 Zoo Bucks to create and maintain their own zoo in Zoo World 2 (a $10 value).

In Zoo World 2, users are able to participate in the fun of a real zoo from the comfort of their computer screen. As the head of their own zoo, players can breed and nurture baby animals – from the cute and cuddly to the fierce and ferocious – helping them grow into healthy adults. Users also have the freedom to personalize their zoo, as the application allows customized animal habitats, paths, and terrain, and offers a wide range of animals to breed – including endangered species.

Currently, Zoo World 2 is in its Open Beta stage with over 8 million users. The original Zoo World has over 50 million installs and over 7 million ‘Likes’ on Facebook. Zoo World 2 was created by RockYou®, a leading developer of social games and advertising solutions for social media.

The bonus features on the DVD include a blooper reel and multiple behind-the-scenes featurettes, including “Creating the Visual Effects,” which shows how filmmakers created talking animals. The Blu-ray Disc™ contains everything included on the DVD, plus deleted scenes, additional featurettes, including “The Cast of Zookeeper,” a look at some of the star voices in the film, including Judd Apatow, Jim Breuer, Jon Favreau, Faison Love and Maya Rudolph, as well as movieIQ+sync. The Blu-ray Combo Pack includes all the added value from the single DVD and Blu-ray versions.

Also included on the Blu-ray and Combo Pack is a playable PlayStation®3 game demo of the highly anticipated RATCHET & CLANK: ALL 4 ONE™, the latest installment in the family-friendly Ratchet & Clank video game franchise, coming in October from Insomniac Games and Sony Computer Entertainment. With this game demo, Blu-ray fans around the world can sample approximately 45 minutes of play from the upcoming game. The demo encompasses two different sprawling and vibrant high definition environments and includes one to four player support, so you can play alone or with up to three other friends as Ratchet, Clank, Qwark, or Dr. Nefarious!

RockYou® is committed to defining the future of social gaming, creating products intended to serve players, advertisers, and developers alike. The company has dedicated itself to the development of high-quality games, including the award-nominated Gourmet Ranch™ and the celebrated Zoo World™ franchise. With advertising products that offer brands more meaningful interactions with players, RockYou creates an unmatched value-per-engagement for both brands and users. RockYou’s partnerships with world-class talent are part of their steadfast commitment to working with the next generation of social game developers. RockYou can be found on the World Wide Web at http://www.rockyou.com.