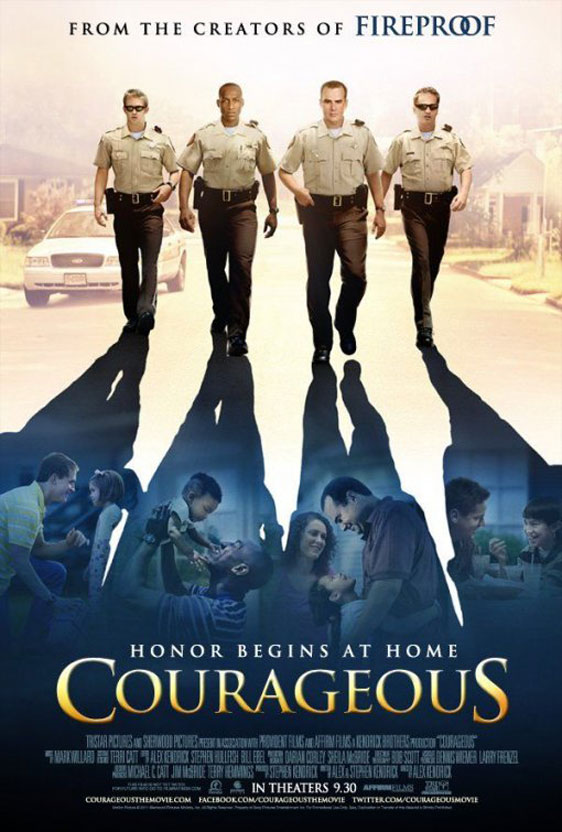 The box office didn’t do so well over this past weekend (especially compared to last year when The Social Network was cleaning house), but new faith-based film Courageous was the number one *new* movie this past weekend. Below are some facts the movies PR department released this afternoon…

1) Ranking. COURAGEOUS was the #4 movie in the country, though it opened against six other movies with almost three times as many screens. It was the #1 new movie of the weekend!

6) Mainstream press response. Most general entertainment press and reporting outlets were surprised by COURAGEOUS. A couple of early excerpts before the actuals were in:

Variety
“Time and again, the pic effectively emphasizes how the deputies are reminded on a daily basis what eventually can happen to at-risk children who don’t have fathers involved in their lives. Little wonder, then, that they’re moved to ask God’s help to hone their own paternal skills.”

Box Office Mojo
“Sherwood Pictures’ COURAGEOUS scored $8.8 million from just 1,161 theaters for a strong per-theater average of $7,580. . . The opening ranks fifth all-time for a Christian movie, and only trails THE PASSION OF THE CHRIST and the three NARNIA movies.” . . . “Made outside of Hollywood without any major stars, COURAGEOUS managed to fly under most radars (including my own) until very recently. It’s unfair to ignore the vast majority of church-going Americans for whom typical Hollywood fare isn’t of great interest, though, and Sherwood Pictures has impressively found a way to mobilize this subset of the population.”

Time
(Best Title Award): Surprise! Dolphins and Jesus Beat Cancer and Dead Kids!“Like the Christian-themed SOUL SURFER, the Kendrick’s holy-cop film (with a $1-million budget) was pitched to the faithful, who came out fervently this weekend and gave it an A-plus CinemaScore. Opening in just 1,161 theaters, COURAGEOUS had the top per-screen average of any movie in the top 25. Even an agnostic would call that heavenly.”

7) Other indicators. Sales of books and resources supporting film’s message—The Resolution books and others—reflect the movie’s spreading influence. Kerusso, maker of t-shirts, reports five times as many COURAGEOUS t-shirts sold as for FIREPROOF. Meanwhile, Facebook fans count on the COURAGEOUS fan page has leapt in a few days from 224,000 to 247,000.

Sherwood Church and its national field of supporters have long prayed for God to do “exceedingly, abundantly more than we could ever ask or imagine,” and He’s doing it. Thank you again for your coverage. Let us know if you’d like to talk with the filmmakers or actors for follow-up stories this week—and let us know how we can help.