“County Line: All In is a fun movie that has a strong family dynamic, plenty of heart…some well measured punches to the face…and some explosions to balance it all out.”

County Line: All In, the Action Crime-Drama Starring Tom Wopat, to Premiere on INSP

The much-anticipated sequel to County Line

will make its exclusive television debut on 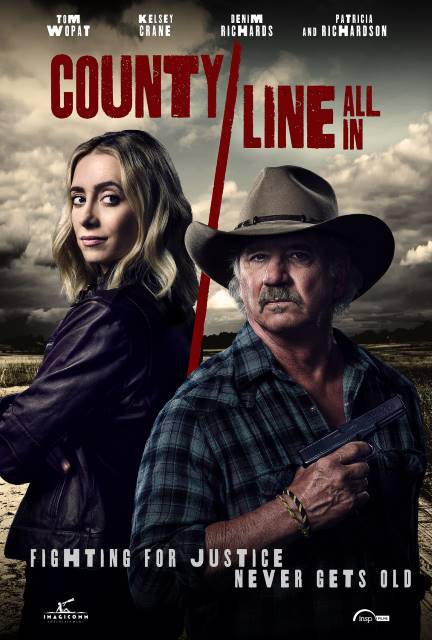 “In 2018, when County Line premiered on INSP, it ranked as the top-rated original film in network history, and it held that record for more than a year,” said Butts. “In particular, viewers loved the cantankerous, yet endearing Sheriff Alden Rockwell, played by Tom Wopat. Their enthusiastic response to the story, the cast and the characters made it abundantly clear that a sequel needed to be made. We’re delighted that we were able to bring back Tom, Patricia Richardson, and other former cast members. We’ve also added some new but familiar faces including Kelsey Crane and Denim Richards to this fast-paced, action-filled crime drama.”

Audiences will enjoy the next chapter in this continuing story, which begins when a corrupt lawyer, known for representing the worst criminals in the area, turns up dead right on the county line. Although seasoned Maksville County Sheriff Alden Rockwell loses the fight over jurisdiction to newly appointed York County Sheriff Joanne ‘Jo’ Porter, after he is unable to shake suspicions of a local mob boss Alden follows his instincts and starts working the case instead of keeping his word to the more methodical Porter. Chasing a lead, he crosses the county line, causing hostility. But when another lawyer winds up dead under suspicious circumstances, the trail takes an unexpected and dangerous turn. Both sheriffs realize they must put aside their differences and work together to track down the killer.

County Line: All In is produced by INSP Films and distributed by Imagicomm Entertainment.