“JOHNNY CASH: THE REDEMPTION OF AN AMERICAN ICON”Exclusively In Theaters December 5,6 & 7 Only

Fathom Events, Kingdom Story Company, WTA Media and Harvest Ministries with Greg Laurie partner on documentary based on conversations with Cash that have never been heard before 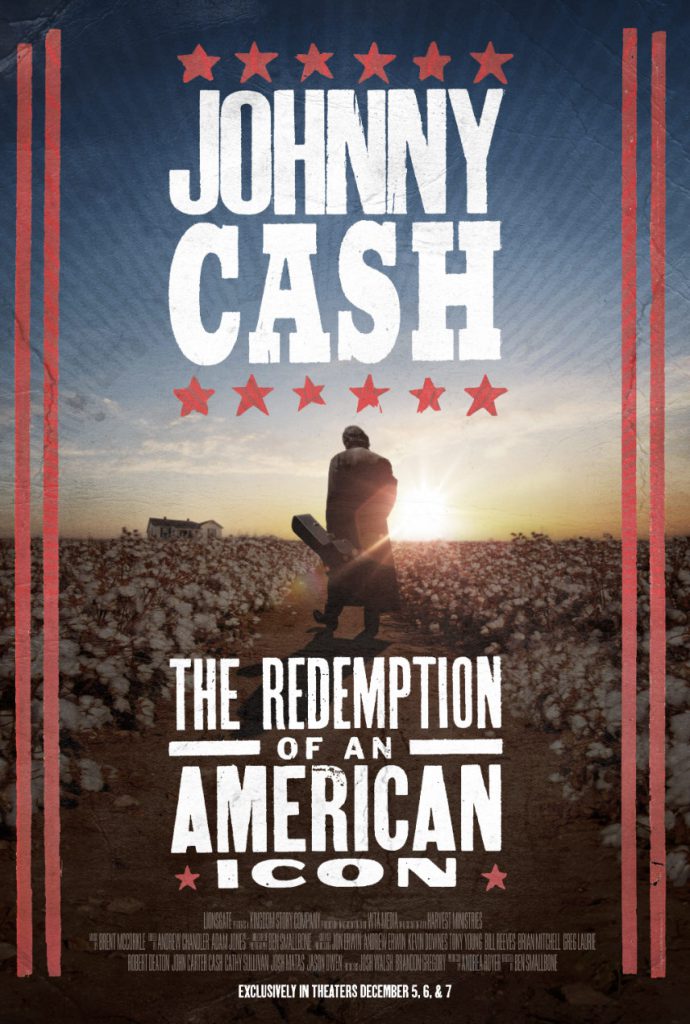 Nashville, TN (October 12, 2022) – Fathom Events, Kingdom Story Company, WTA Media, and Harvest Ministries with Greg Laurie have partnered to release “Johnny Cash: The Redemption of an American Icon” this fall. Initially announced at CinemaCon this past spring, the documentary will be in theaters December 5, 6 & 7 only, and tickets are on sale now HERE.

”Johnny Cash is an American icon who undoubtedly shaped the musical landscape. Behind the fame is the true story of a man who was haunted by his own inner demons, and through facing them, ultimately found an unshakable faith in God,” said producer Jon Erwin. “At Kingdom Story Company, we strive to bring inspiring true stories to screen. ‘Johnny Cash: The Redemption of an American Icon’ is one such story. We’re excited to share it with you in theaters this December.”

“I think of all the documentaries made about my dad, he’d be most excited about this one,” said John Carter Cash of the film.

Kingdom Story Company created the documentary with exclusive access to over 100 tapes that have never been heard before outside of the Cash family. Originally recorded for Cash’s autobiography, the tapes were provided with the blessings and involvement from John Carter Cash, the only child of Cash and June Carter Cash, and his sister, Joanne Cash.  “Johnny Cash: The Redemption of an American Icon” features John Carter Cash, Sheryl Crow, Tim McGraw, Marty Stuart, Wynonna Judd, Jimmie Allen, Alice Cooper, Franklin Graham, Joanne Cash Yates, Greg Laurie, and many others.

“Johnny Cash and his music are an indelible part of the fabric of America,” said Ray Nutt, CEO of Fathom Events. “As a huge fan myself, I know that audiences will love hearing his one-of-a-kind music and seeing his command of the stage on the big screen – and being able to live his spiritual transformation through this film will be especially inspiring.”

Recounting a critical period in Cash’s life and career, the documentary takes place during the time of his most famous album “Man In Black” while the legend was stuck in a cycle of depression and drug addiction. The road to redemption for the iconic country star and his return to an “unshakeable faith” that would influence some of his most famous songs like “The Man Comes Around,” are at the core focus of the film.

“Here’s the great contradiction–who could be friends with Willie Nelson, Waylon Jennings, and Billy Graham all at the same time? The answer, Johnny Cash,” said Pastor and Producer Greg Laurie of Harvest Ministries. “He was a contradiction at times, but he had a deep faith that he always returned to.” Laurie is also the author of a recent spiritual biography of Johnny Cash, and this is his second “American Icon” documentary, having released “Steve McQueen: American Icon” in 2017.

Kingdom Story Company, in an exclusive partnership with Lionsgate, creates life-changing content. Helmed by Jon Erwin, Andrew Erwin, Kevin Downes, and Tony Young, Kingdom Story Company aims to raise the bar on thoughtful, high-quality entertainment through true storytelling that is anchored in faith and hope. Features include I CAN ONLY IMAGINE, AMERICAN UNDERDOG, I STILL BELIEVE, OCTOBER BABY, MOMS’ NIGHT OUT, and WOODLAWN, amassing nearly $150M in box office. www.kingdomstorycompany.com.

Fathom is a recognized leader in the entertainment industry as one of the top distributors of content to movie theaters in North America. Owned by AMC Entertainment Inc. (NYSE: AMC); Cinemark Holdings, Inc. (NYSE: CNK); and Regal, a subsidiary of the Cineworld Group (LSE: CINE.L), Fathom operates the largest cinema distribution network, delivering a wide variety of programming and experiences to cinema audiences in all of the top U.S. markets and to more than 45 countries. For more information, visit www.FathomEvents.com.

About Harvest Ministries with Greg Laurie

Greg Laurie is the senior pastor of Harvest Christian Fellowship with campuses in California and Hawaii and featured speaker of public evangelistic events called Harvest Crusades. In 2020, and in partnership with Kingdom Story Company, Laurie premiered his first-ever cinematic crusade, A RUSH OF HOPE, viewed by over 2 million people in its opening weekend. Laurie’s other films include STEVE MCQUEEN: AMERICAN ICON, HOPE FOR HURTING HEARTS, and LOST BOY. Laurie is also the host of nationally syndicated television and radio programs and author of over 70 books, including JOHNNY CASH: THE REDEMPTION OF AN AMERICAN ICON. For more information visit harvest.org.

About LionsgateThe first major new studio in decades, Lionsgate is a global content platform whose films, television series, digital products and linear and over-the-top platforms reach next generation audiences around the world. In addition to its filmed entertainment leadership, Lionsgate content drives a growing presence in interactive and location-based entertainment, gaming, virtual reality and other new entertainment technologies. Lionsgate’s content initiatives are backed by a 16,000-title film and television library and delivered through a global licensing infrastructure. The Lionsgate brand is synonymous with original, daring and ground-breaking content created with special emphasis on the evolving patterns and diverse composition of the company’s worldwide consumer base. For more information, visit https://www.lionsgate.com/.