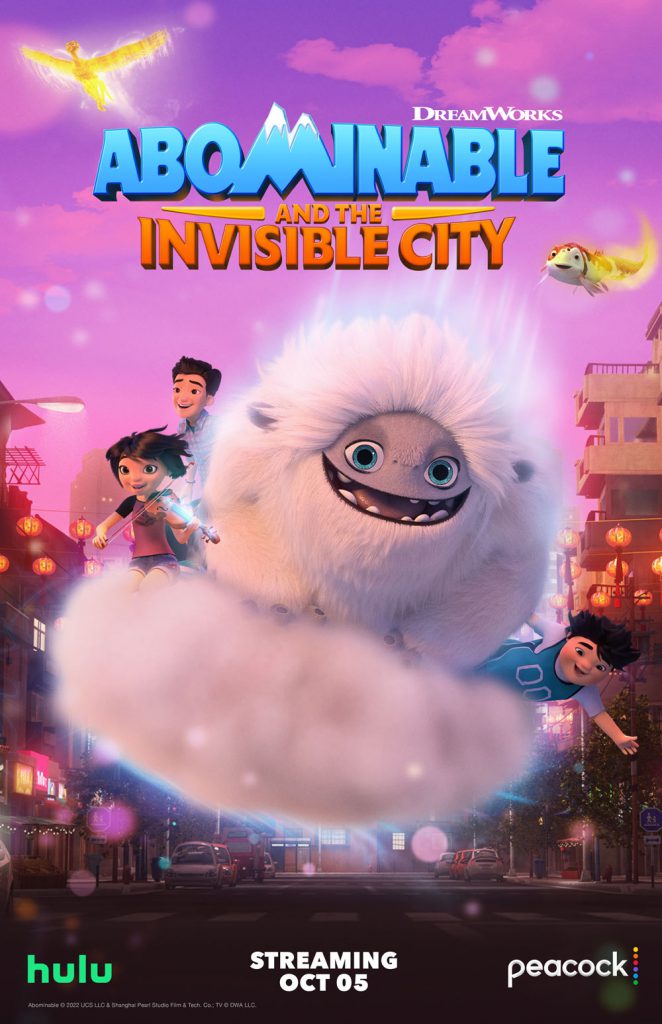 DreamWorks Animation is excited to share the series trailer, cast and premiere date for Abominable and The Invisible City. Inspired by the 2019 film Abominable, all 10 new episodes premiere on Peacock and Hulu October 5th.

Abominable and The Invisible City is a comedy adventure series that continues the wild and wooly fun of DreamWorks Animation’s Abominable. Through Everest the yeti, Yi, Jin, and Peng know that there’s a whole magical world out there, and now it’s even closer than they think! When they discover that their surroundings are teeming with magical creatures in need of their help, the kids will set out on extraordinary and heartfelt adventures throughout their city and beyond.
Trailer: https://youtu.be/IAw2HnwCkFQ

ABOUT DREAMWORKS ANIMATION:
DreamWorks Animation is one of the world’s leading producers of high-quality, animated family programming, reaching consumers in more than 190 countries. Creating a diverse array of original content in a variety of formats and delivering deep, fully immersive worlds served up with compelling characters, the prolific studio is home to such beloved series as The Boss Baby: Back in the Crib, Gabby’s Dollhouse, Jurassic World: Camp Cretaceous, The Croods: Family Tree, Trolls: Trollstopia, Go, Dog. Go!, Madagascar: A Little Wild and Kung Fu Panda: The Dragon Knight.  DreamWorks is a division of the Universal Filmed Entertainment Group within NBCUniversal, a subsidiary of Comcast Corporation.