Skip to content
News Paramount Press Releases
SANDRA BULLOCK AND CHANNING TATUM STAR IN THE HILARIOUS COMEDY ADVENTURE
THE LOST CITY
Buy it on Digital May 10, 2022 with Behind-the-Scenes Interviews,
Uproarious Bloopers, and More Footage Not Seen In Theaters! 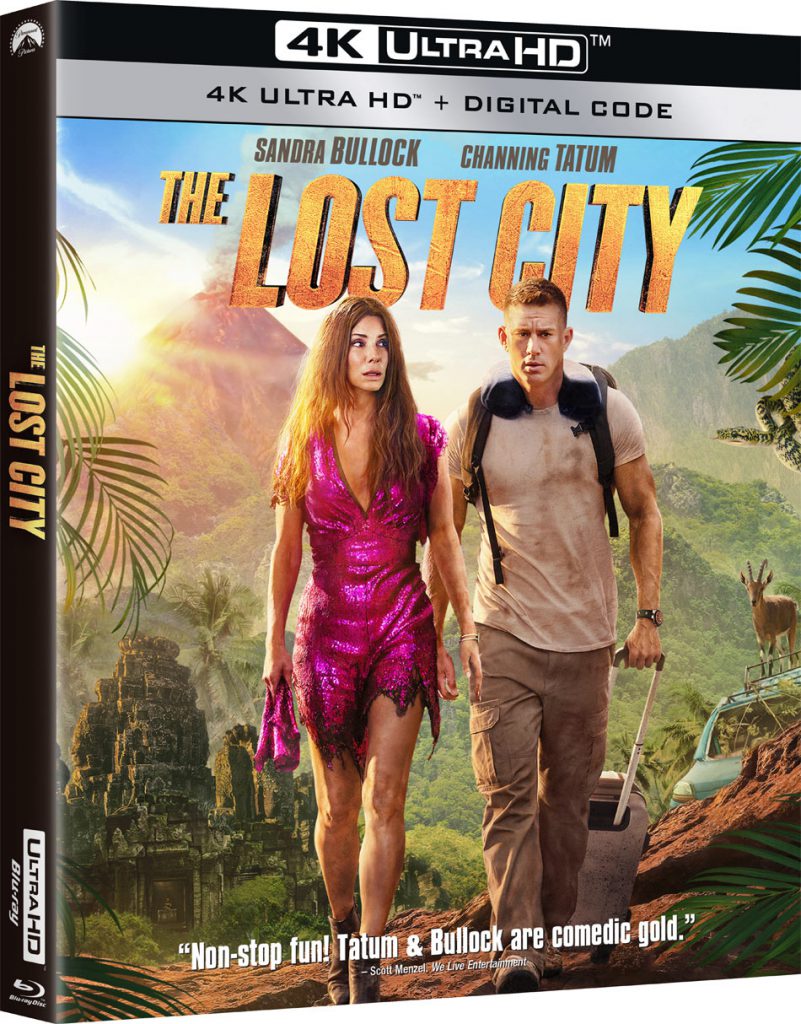 HOLLYWOOD, Calif. – Discover thrilling adventure, fabled treasure, and epic laughs when the hit comedy THE LOST CITY finds its way home for purchase on Digital starting May 10, 2022. The film will arrive on 4K Ultra HD, Blu-ray, and DVD July 26 from Paramount Home Entertainment.

Starring Sandra Bullock, Channing Tatum, Daniel Radcliffe, and Da’Vine Joy Randolph, this “fun & wild jungle adventure comedy” (Erik Davis, Fandango) is “a hilarious adventure from start to finish” (Dorian Parks, Geeks of Color). Fans can enjoy THE LOST CITY at home on Digital*, 4K Ultra HD, or Blu-ray and get over 50 minutes of fun-filled bonus content, including hilarious bloopers, deleted scenes not seen in theaters, and multiple behind-the-scenes featurettes. Take a trip to the movie’s exotic filming location, see how the incredible action set pieces were filmed, discover the story behind the infamous jumpsuit, and much more!

THE LOST CITY synopsis
Loretta Sage’s (Sandra Bullock) novels are filled with ancient tombs and daring adventures, but that doesn’t mean she’s prepared for them in real life. When she is kidnapped by an eccentric billionaire (Daniel Radcliffe) to locate a legendary lost city, Loretta’s handsome cover model, Alan (Channing Tatum), sets off on a heroic but hapless rescue mission. Thrust into an epic thrill-ride through the jungle, the unlikely pair must work together to survive the elements, and survive each other, to find the city’s fabled treasure before it’s lost forever.

Endorsement Guidelines: Paramount Pictures Corporation and Paramount Home Entertainment (collectively “Paramount”) are not requesting or requiring any online or social media coverage, publication, or posting (i) in connection with this press release or (ii) in exchange for any products, materials, services, or any other benefit provided to recipient (“Recipient”) by Paramount in connection herewith. Recipient agrees that any social media posts or public statements made by Recipient in connection with this press release, any products, materials, services, or benefit provided to Recipient by Paramount will comply with all applicable laws, rules, regulations, guidelines, and/or policies (collectively, the “Laws”), including, without limitation, those concerning endorsements and testimonials in advertising in the territory(ies) in which Recipient resides and/or in which Recipient’s posts will be featured (for example, in the United States: Federal Trade Commission (“FTC”) endorsement disclosure guidelines, FTC FAQs, and “Disclosures 101 for Social Media Influencers,” all available at https://www.ftc.gov/influencers)). To the extent required by any Laws, Recipient shall include an accurate, clear, and conspicuous disclosure of any relationship between Recipient and Paramount in language that is easy to understand and in a noticeable manner.