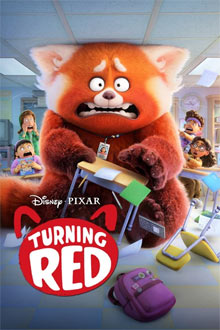 In 2002, a 13-year-old girl named Meilin (Mei) turns into a giant red panda whenever she gets too excited. (from IMDB)

Pixar Animation’s films have redefined animated films since releasing their first effort, Toy Story, in 1995. In the years that followed the smash hit, they’ve continuously released quality and impactful movies that proved they were an exceptional film studio. However, in recent years, while the animation quality has never faltered – and only improved with each entry – the stories have been rather hit and miss. It’s tough to pinpoint exactly when the studio began losing its footing. Some may argue it was with Cars 2 in 2011, or The Good Dinosaur in 2015, but whatever the case, the studio has shown its mortality; they are just as capable as making a disappointing film (Cars 3) as making one that reshapes movie-making as we know it. 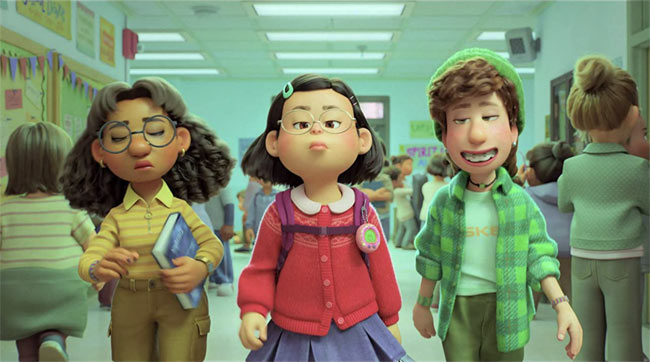 Pixar movies have long been the genre- and audience-defying fare that can transcend the age ranges of its proposed viewership. For example, I don’t care what age you are when you see a Toy Story movie – if you are a kid or have ever been a kid, the movie is completely relatable. Not only are those movies relatable, but they’re funny, well-told and just wonderful films. 2008’s Wall-E and 2010’s Up even felt more like they was geared towards grown-ups than children. And 2015’s Inside Out took a deep and thoughtful look at human emotions that any age could relate to. For 2022’s Turning Red, I think we’ve finally found a movie that seems entirely and exclusively tailored to the very specific age range of 12 and 13-year-old girls. 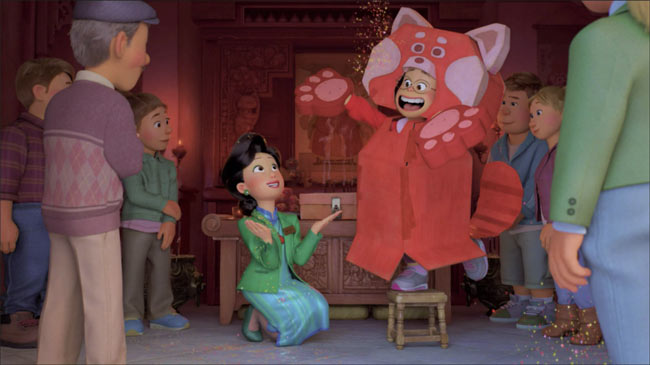 What’s even more out of character for Pixar here is how different the overall tone of Turning Red is. It fully commits to the tween-age girl attitude, and adopts a much different animation style in the process. It’s more like The Mitchells vs. the Machines than anything Pixar has done before. There’s usually been a grand, cinematic, larger-than-life feel to the Pixar features, but Turning Red feels much more like a Disney movie than a Pixar one. A different approach is hardly wrong by definition or concept, but when it hits in a negative way, that’s when “different” can constitute as an all-out misstep. Turning Red‘s story centers around a little Chinese girl name Mei who lives in Toronto and has a close-knit group of three other female friends who are as diversified as you can get. (With society pushing so hard for inclusivity, it’s not even subtle at the approach here. Each member of Mei’s entourage is very distinctly and ethnically different. Again, that isn’t necessarily a bad thing, of course, but it’s an obvious gesture from filmmakers these days that isn’t subtle and feels more forced than organic.) Her tween foursome is a tight and loyal gang who support each other and have one huge common passion: a boy band called 4-Town. And because of the boy-band obsessed times of the 90s and early 2000’s — when acts like NSync and Backstreet Boys ruled the airwaves (and young girls’ hearts) — Turning Red is actually set, oddly enough, 20 years ago in 2002! It’s not super obvious, either, as most of the movie feels modern enough. And with a lot of 80s and 90s nostalgia being popular now in 2022, any nods to the bygone age of 2002 feel relevant. But Mei’s story greatly involves her culture’s heritage that centers around the supernatural beliefs behind the red panda. And as her family seeks to honor their fantastical heritage, Mei wakes up one day to find that she has turned into a giant red panda herself. Turning Red has some serious Big and Teen Wolf vibes here on out, and as Mei tries desperately to hide her body’s major changes, her mother immediately believes her daughter is experiencing the horrors of… her first period.

And that’s where I’m sure the movie will lose the young boys (as they probably throw up their hands, exclaim “I’m out!” – in true Seinfeldian fashion – and head for the door). Yes, folks, Turning Red is more or less an allegory for a young girl maturing into puberty. This is actually a fine concept if it is helpful for young girls – don’t get me wrong (the panda is even a RED panda, guys. Yikes.) – but it greatly alienates the audience for Turning Red. Yes, Mei as a giant fluffy panda is one of the cutest animated animals we may have ever seen, but the story is greatly skewed towards young girls and what young girls like. Unfortunately, the human version of Mei, while somewhat endearing, is pretty obnoxious, and her closest friends are too. For an adult male – who loves movies of many kinds – it was a bit painful to watch. I have appreciated movies like Tangled, Raya and the Last Dragon and Brave – to name a few – who have strong female leads, but Turning Red is one of the first major, original motion pictures that I’ve seen that seems to have a very intentionally younger target audience. 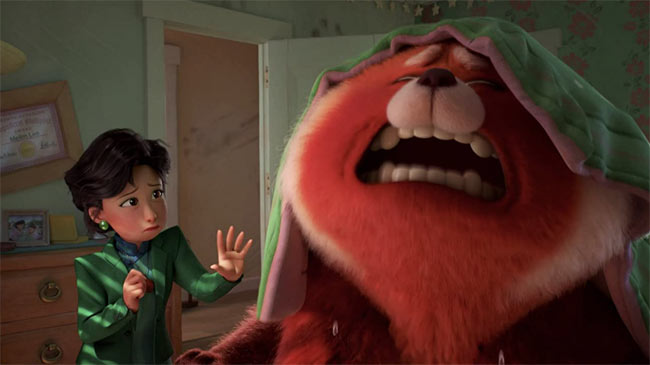 The driving plot of Turning Red also may feel rather petty. Mei and her friends desperately want to see 4-Town in concert, and they end up using the newfound fame of her fluffy red alter-ego to raise money to get tickets. They also do this deliberately against their parents’ wills and Mei has to lie and sneak around to do it. (The popularity of Mei as the panda with her friends is totally where the Teen Wolf movie vibes come in.) The magical elements involving the red panda are weird ones as well. Disney movies frequently have magical themes, but it’s a more rare one for a Pixar movie. If any viewers feel uncomfortable with mystical/magical elements – despite being rooted in ancient Chinese culture – then Turning Red is likely to do just that. It’s literally about ancestor worship. (Does anyone else find it a little odd that Disney likes to do movies about foreign cultures and their supernatural animal worship, but steers clear of any Christian Bible stories? Hmmm.)

The rest of the content for Turning Red is of the typical animated PG-rated movie kind. There are a couple uses of “cr*p” from the girls, which surprised me, as well as an occasional “Oh my G-d” (and a lot of “OMG”). The violence in the movie is mostly comical, and there is some bullying/teasing from some of the kids at school. They “out” Mei’s biggest critic, Tyler, later in the film as being a huge 4-Town fan (again, we’re talking about a boy band), which in 2002, probably wouldn’t have been thought too much of, but in 2022, seems like a hint that Tyler could be gay. There’s also a blink-and-you’ll-miss-it view of two guys walking down the street as Mei, in panda form, flies overhead, and it appears they may be holding hands. With a Disney exec recently admitting that they have a “not so hidden” gay agenda, I wouldn’t be surprised that there are deeper intentions for things like these hidden in their movies and shows. (And they’re being increasingly less “hidden” these days, too.) There’s also a weirdly pro-choice message where, at one point, Mei declares, “My panda, my choice!” which is a silly take on a popular pro-abortion slogan. It feels especially out of place for a kids movie. (And a bit manipulative towards younger girls watching the movie.) 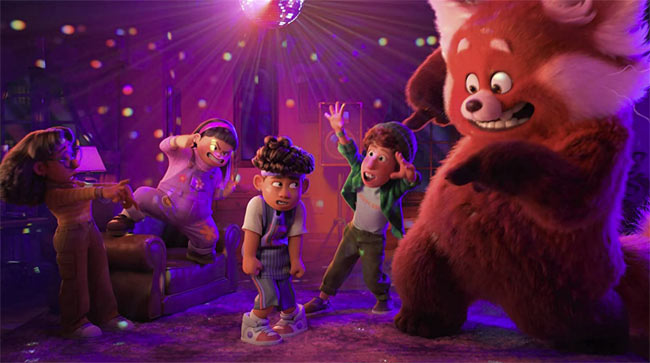 I’m willing to admit I’m hardly the target audience for a movie like Turning Red, however, there have been plenty of movies where I liked them in spite of that. With its full-on obnoxious attitude, theme for girls entering puberty, tensions between the kids and their parents (of varying generations), and heavy appreciation for boy bands and that musical genre, there just isn’t much for a viewer like me in Turning Red. Even trying to see past that and take Turning Red for the movie it’s unashamedly presenting itself to be, I feel like it could have been handled a lot better. When all is said and done, Turning Red is an obnoxious mess.

Sex/Nudity: Mei starts liking a teenage boy who is older than her and starts drawing in a notebook a bunch of sketches of her kissing a boy and him holding her. Frustrated with herself, she calls herself a “sicko” for drawing them; Mei’s mom finds her sketch book and is horrified as she turns page after page of drawings – which we don’t see; Mei’s Mom tries to delicately ask her if she got her first period; One of Mei’s friends tells her that people are saying she’s “kind of a perv”; Tyler mocks Mei by running his hands along his body, turning around like he’s kissing someone and shaking his butt; Mei’s mom tries to sneak onto school property to get a box of maxi-pads to Mei. We see her hold it up in the air for her whole class to see; We very briefly see what kind of looks like two guys holding hands while walking down the street; Mei’s mom makes a comment about the 4-Town boys’ “gyrations” (dancing); A comment is made about Abby’s parents calling it “stripper music”; When they’re invited to Tyler’s birthday party, one of the girls says “It sounds like a boy/girl party. Are we allowed to boy/girl parties?”; Tyler is revealed to be a 4-Town fan, wearing sparkly glasses with one of the boys’ names on them. He even yells out that he loves one of the band members; Mei yells at her mom, “I like boys. I like loud music. I like gyrating! I’m 13 deal with it!”; Mei shakes her panda butt at her mom and says “do you want to see crass??”; Mei declares, “My panda my choice.”

Alcohol/Drugs: A character says to a child, “This is what happens when you don’t wear sunblock and do drugs all day”; Abby acts like the panda is a drug and says she needs a hit. When she hugs it she says, “Oh yeah, that’s the stuff”

Blood/Gore: Tyler has scrapes on his face after Panda Mei angrily pounces on him; Mei recalls screaming at Tyler with scratches on his face

Violence: Abby yells at some kids and kicks a ball of paper; Abby screams to burn the school to the ground; A car runs over and flattens a basketball; Mei chases off kids with a broom who were vandalizing a wall with spray paint. She swings the broom wildly at them; Mei has some weird dreams that show scary fish and flowers with boys’ faces on them. We also see what looks to be a severed worm. It’s a really creepy scene; Mei as a panda accidentally trashes her bathroom; Mei rips down a drawing in school and tears it up; Mei’s mom kicks a man in the shin; Mei’s panda accidentally knocks people over; A car stops short of hitting the panda and a car hits the first car; Mei tries climbing a fire escape and pulls it off the building. She then causes a store sign to fall to the street; Panda Mei knocks over an altar and mom holds her back from destroying their altar; Mei asks Abby to punch her in the arm and she punches her in the face; Mei throws a dodgeball through a window; Mei’s parents and extended family try to hold the panda back. She knocks them over; Panda Mei runs through the streets, causing some chaose; SPOILER ALERT: A giant panda climbs into a stadium, causing pandemonium (I couldn’t help myself); The giant panda rips a signs off the stage and crashes it to the ground; Panda Mei is grabbed by the giant panda and bites its hand. She falls to the ground; Mei head-butts the giant panda onto the stage, who crashes it.