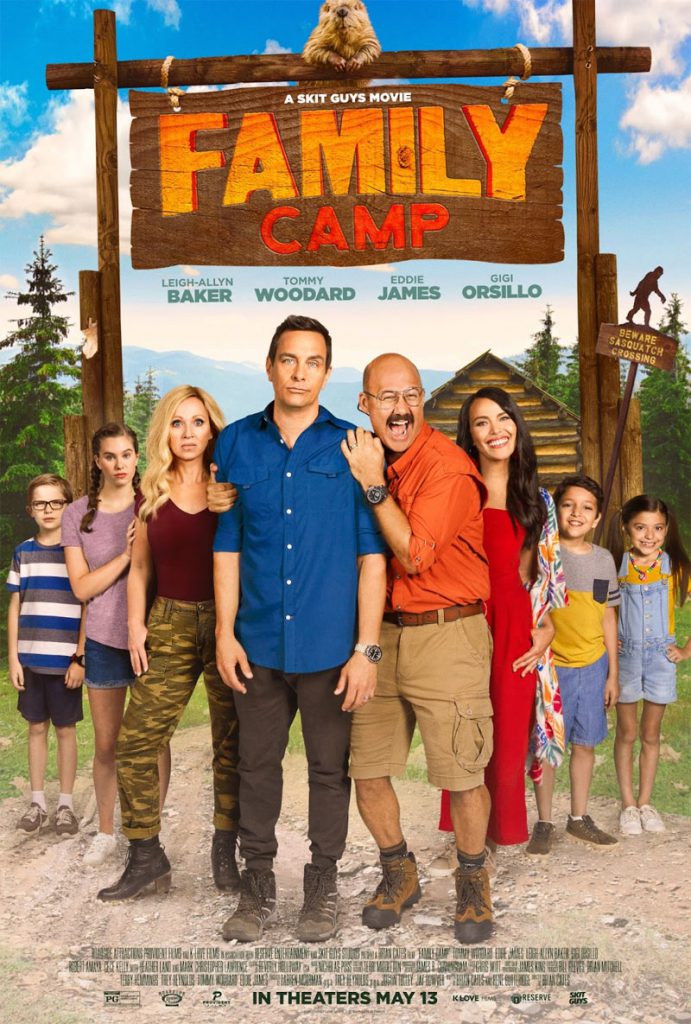 Watch the trailer for FAMILY CAMP here.
When their pastor (Mark Christopher Lawrence) encourages the congregation to sign up for a week away at family camp, Grace (Leigh-Allyn Baker) believes she’s found the perfect cure for her imperfect clan—even if they’d all rather be anywhere but at rustic Camp Katokwah. FAMILY CAMP is a laugh-out-loud comedy that is sure to touch the hearts and tickle the funny bones of every family member from eight to eighty.
“For over 20 years, we’ve dreamed about making a comedy feature film,” said Eddie James of The Skit Guys. “Our goal is to always include humor, heart, and Him (God), and we were able to accomplish that in FAMILY CAMP.”
“We believe humor helps break down barriers,” said Tommy Woodard of The Skit Guys. “With our first movie, we hope families will not only laugh together, they will also draw closer to each other … and to God.”
FAMILY CAMP, written by director Brian Cates and Rene Gutteridge, is a faith-based film that the entire family will enjoy. Producing FAMILY CAMP are industry veterans Darren Moorman (BLUE MIRACLE, SAME KIND OF DIFFERENT AS ME), Trey Reynolds (BLUE MIRACLE), and Justin Tolley (WAR ROOM), along with Jay Howver, The Skit Guys’ Chief Operations Officer.
“I feel like there’s a real hole in the movie world when it comes to family comedies. I mean, this is what used to drive the box office,” said Leigh-Allyn Baker. “People, now more than ever, need to laugh. I’m really glad that people can laugh at this and laugh with us.”
Follow FAMILY CAMP on Facebook (@FamilyCampMovie), Twitter (@FamilyCampMovie), Instagram (@FamilyCampMovie2022), and online at FamilyCampMovie.com.
About The Skit Guys:
The Skit Guys are Tommy Woodard and Eddie James, who have been best friends since high school. They fell in love with acting through their involvement in the school’s theater productions, and discovered they had a knack for making people laugh. When Tommy invited Eddie to church, everything changed. With encouragement and guidance from their youth pastor, the guys started to write and perform skits for their youth group. No longer was it just about making people laugh—their skits now had a bigger purpose. Since their high-school days, they’ve been writing and performing hilarious and poignant skits live and on camera. Tommy and Eddie have traveled the world performing at events, churches, and conferences. Their SkitGuys.com website has grown into a treasured media resource for pastors and their churches. Their numerous short films, skits, and scripts are used in churches all over the world. When The Skit Guys aren’t performing or shooting new short films, both Tommy and Eddie serve in their local churches, enjoy good food (especially pizza and fries!), and love life with their families.
About Provident Films:
Provident Films creates entertainment that inspires audiences to believe in God’s purpose for their life. Since 2006, the company has pioneered the faith-based film genre yielding over $280MM in box office sales. The company produced industry hits such as Kendrick Brothers’ OVERCOMER, WAR ROOM, COURAGEOUS, FIREPROOF, FACING THE GIANTS, and the Erwin Brothers’ WOODLAWN and MOMS’ NIGHT OUT. Most recently Provident Films produced BLUE MIRACLE in partnership with Netflix.
Provident Films is part of the Nashville-based Provident Entertainment, a division of Sony Music Entertainment. For more information, visit ProvidentFilms.org.
About K-LOVE Films and Educational Media Foundation:
Educational Media Foundation (EMF) began as a single, nonprofit radio station in Northern California in 1982 and is now parent company to K-LOVE and Air1 – the nation’s largest contemporary Christian radio networks. With nearly 500 employees and broadcasting on more than 1,000 signals across all 50 states, EMF is also among the top 10 U.S.-based audio streaming companies.
EMF is also parent company to WTA Media (a leader in faith-based films and publishing), AccessMore (a growing faith-focused podcasting platform), K-LOVE Books and K-LOVE Films. The ministry continues to expand with the mission of creating compelling media that inspires and encourages audiences to have a meaningful relationship with Jesus Christ. For more information, please visit EMFbroadcasting.com.
About Roadside Attractions:
Since its founding in 2003, Roadside Attractions’ films have grossed over $500 million and garnered 23 Academy Award® nominations. The company recently released The Desperate Hour starring Naomi Watts, The Courier starring Benedict Cumberbatch, and Rita Moreno: Just A Girl Who Decided To Go For It and The Alpinist.
Upcoming films include Sundance 2022 titles Alice starring Keke Palmer, Common and Jonny Lee Miller and Emily The Criminal starring Aubrey Plaza and Theo Rossi; Aline, a fiction freely inspired by the life of Celine Dion, and The Forgiven starring Jessica Chastain and Ralph Fiennes.
The company has released such critical and commercial hits as Judy, The Peanut Butter Falcon, I Can Only Imagine, Manchester by the Sea, Ben Is Back, Beatriz at Dinner, Whitney, Stronger, Love & Friendship, Hello, My Name Is Doris, Mr. Holmes, Love & Mercy, A Most Wanted Man, Dear White People, The Skeleton Twins, All Is Lost, Mud, Bella, Winter’s Bone, The Cove, Arbitrage, Margin Call, Amazing Grace and Super Size Me.
JLM admin
No Comments