WARREN BEATTY AND JULIE CHRISTIE STAR IN THE BELOVED ROMANTIC COMEDY, ARRIVING ON BLU-RAY™ FOR THE FIRST TIME EVER 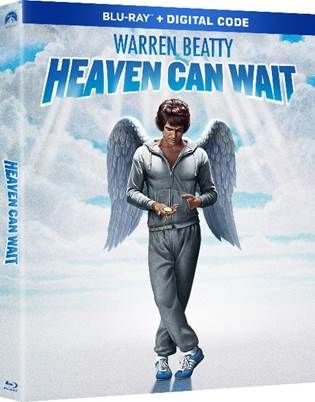 Warren Beatty stars in (as well as produces, co-writes, and co-directs) the fan-favorite comedy HEAVEN CAN WAIT, which has been fully restored and remastered from the original negative under Beatty’s supervision for its arrival on Blu-ray for the first time ever November 30, 2021 from Paramount Home Entertainment.

Directed by Beatty and Buck Henry, with a screenplay by Elaine May and Beatty, HEAVEN CAN WAIT features a sensational cast filled with comedic talent, including Julie Christie, James Mason, Charles Grodin, Dyan Cannon, Buck Henry, Vincent Gardenia, and Jack Warden.  The film was nominated* for nine Academy Awards®, including Best Picture, Best Director (Beatty and Henry), Best Writing, Screenplay Based on Material from Another Medium (Beatty and May), Best Actor in a Leading Role (Beatty), Best Actor in a Supporting Role (Warden), Best Actress in a Supporting Role (Cannon), and more.

Joe Pendleton (Beatty) is a Los Angeles Rams backup quarterback ready to lead the team all the way to the Super Bowl, but the afterlife has other plans. It seems an overzealous guardian angel has prematurely plucked Joe from the living. When he’s returned to Earth in the body of millionaire industrialist Leo Farnsworth, he inherits a world of challenges, including winning the love of a woman (Christie) who already hated “him.”

The Blu-ray includes the feature film in high definition and access to a Digital copy of the film.